Two police forces have admitted that a cover-up took place, and yet a barrister still continues to purport that there wasn’t one. That adds to the injustice of nobody ever being held accountable for the deaths of 96 innocent people.

On June 4, 2021, Saunders Law, a legal firm representing 219 of 601 claimants seeking justice for the orchestrated cover-up that occurred following the Hillsborough Stadium disaster in 1989, released a statement on behalf of their clients.

In it they revealed that both South Yorkshire and West Midlands Police forces had formally acknowledged that a cover-up took place following the tragedy that cost the lives of 96 supporters, and as a result compensation would be paid to those who had suffered psychiatric distress as a result. It represented a significant step in the 30-year campaign for justice, as the statement suggests:

“Through this civil claim for misfeasance in a public office 601 victims sought justice and accountability for the deliberate, orchestrated and thoroughly dishonest police cover-up that suppressed the truth about the responsibility of the police and blamed the football supporters for the horrific events that unfolded at the Hillsborough Stadium on 15 April 1989. 96 Liverpool supporters were unlawfully killed as a result of the police failings that day, and countless others suffered physical and psychological harm.

The distress and heartache caused by the loss of life, and the injuries caused to those who survived, were made significantly worse by the lies told and the cover-up that followed. As a result of the cover-up, that was maintained for nearly 30 years, the victims, both the bereaved and the survivors, and their families and loved ones, suffered additional psychiatric injury. No amount of money can compensate them for the ordeal they have suffered but this settlement acknowledges both the cover-up and its impact upon each of the victims.”

“We offer an unreserved apology to those affected by the Hillsborough disaster and its aftermath. Serious errors and mistakes were made by SY Police, both on 15 April 1989 and during the subsequent investigations.

“Those actions on the day … tragically led to lives being lost and many being injured. The force’s subsequent failings also caused huge distress, suffering and pain, both to the victims and their families. This is something South Yorkshire Police profoundly regrets.”

Finally, it seemed, the truth had been acknowledged by those culpable and some form of compensation agreed.

However, the fact that the authorities could have successfully contorted and suppressed the truth for so long, inflicting pain and misery on people already damaged by the tragedy, is in itself astonishing and should be deeply worrying to us all. As Saunders Law points out:

“It took until 2012 and the publication of the report of the Hillsborough Independent Panel for the lid to finally be lifted on the depth and extent of the cover-up. The findings of the Panel formed the basis for an apology to the victims and families by the then Chief Constable of South Yorkshire Police, David Crompton. On 12 September 2012 he accepted that there had been a high-level dishonest cover-up by South Yorkshire Police officers, and that the police failed the victims and families and lost control.”

After the publication of the Hillsborough Independent Panel report, the then-Prime Minister, David Cameron reaffirmed the existence of a cover-up, telling the House of Commons that:

“The families have long believed that some of the authorities attempted to create a completely unjust account of events that sought to blame the fans for what happened… the families were right.”

Unlawfully killed – but no accountability

In quashing the original verdicts of accidental death, the Lord Chief Justice spoke of a tenacious campaign to blame the fans, which he described as false.

Despite this, the families and survivors would once more have to disprove attempts to shift accountability and avoid justice at fresh inquests conducted in Warrington between 2014 and 2016. Fortunately, the jury rejected these lies once more. The inquests ruled that those who perished at Hillsborough had been unlawfully killed.

Tragically though, subsequent prosecutions failed, leaving those who have battled for so long for truth and justice heartbroken.

To add to their pain, in the aftermath of failed prosecutions, Jonathan Goldberg QC repeated claims that supporters were somehow responsible, to listeners of a BBC Radio show hosted by Adrian Chiles. Goldberg later apologised for any offence caused and the BBC and Chiles issued apologies for not challenging his claims on air. For many though, the damage had already been done.

That nobody has been held to account for both the unlawful killing of 96 people at a football match or the cover-up that followed is an injustice of monumental proportions. It should be unacceptable to every citizen of this country.

However, the continued smears and attempts to rewrite history are a chilling warning to all who have been wronged by the State and who seek justice. The victims of the Grenfell fire may tragically be starting out on the same journey as the families of the 96. 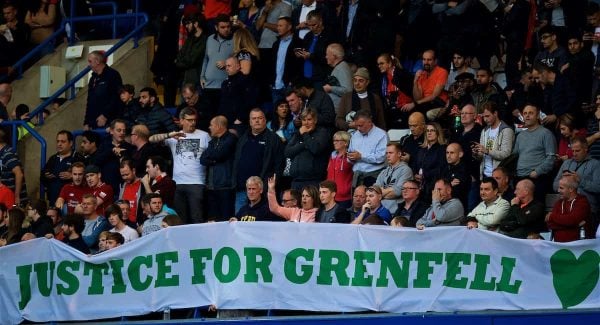 Lawyers representing families and survivors of the Hillsborough disasters had barely finished expressing their hopes that in light of the acknowledged cover-up, that there would now be an end to all attempts to distort the truth, they said:

“We trust that this settlement will put an end to any fresh attempts to rewrite the record and wrongly claim that there was no cover-up. In so commenting, we contrast the dignity of the bereaved families and the supporters, with the conduct of those who still seek to peddle the discredited lies of the past.”

Instead, not 24 hours after the historic settlement, Chris Daw QC, writing in The Spectator, claimed that there “…was no cover up,” and suggested that we should “…start to view tragedies as opportunities for truth, reconciliation and learning.” He continued, “If we cease clamouring for prosecutions at all costs, and focus instead on making sure these tragedies do not happen again, the world will be a much better place. Vengeance helps nobody.”

It’s hard to know where to start with this, aside from screaming when will this ever end?

Once more we are forced to defend basic truths that have long since been established. It’s exhausting and I suspect it’s part of a deliberate strategy aimed at wearing down campaigners and forever muddying the waters for future generations.

This won’t work on Merseyside or with the families of those affected, who live all across the land. However, tragically, it could work with the public at large. That is deeply worrying and it’s why articles like this must continue to be challenged.

The final paragraph of Daw’s piece is the most sickening of all because it is disguised as an appeal to reason. However, it is little more than a thinly veiled attempt to portray the fight for justice as a quest for “vengeance.”

In it the QC, who claims to be a Liverpool supporter, calls for a new spirit of truth, reconciliation and learning in the aftermath of disasters. In doing so, Daw is describing a future utopia that is so utterly unrecognisable to those who have battled for decades to find truth, while being denied any hope reconciliation and seeing scant evidence of any meaningful learning along the way, that he cannot be taken seriously.

If we are to have a culture of learning – and I believe that would be a fitting legacy of the tragedy – then that can only happen when institutions and officials are compelled by law to tell the truth.

Victims and their families must be provided with the same support and representation as the authorities who are accused of wrongdoing. In short, we need the “Hillsborough Law” to be enacted.

I firmly believe, and I always have, that if in 1989 the authorities and institutions had held up their hands at the earliest opportunity, acknowledged their failings, apologised and arranged for prompt physical, psychiatric and financial support for the victims and their families, then those harmed would by now be in a better place. There would be no sense of betrayal, anger and injustice and the grieving and recovery process would have taken its natural course.

Instead, these same people have been forced to put healing on hold in order to fight for the truth, for decades. Their pain and distress has been greatly exacerbated by the denial of the facts and of justice. To then accuse these same damaged souls of “pursuing old men,” and of “vengeance,” as Chris Daw does, is cruel and shameful.

Reconciliation is only possible when the truth is told as quickly as possible, and when there is accountability. This doesn’t always mean punishment, but when the wrongdoing is criminal, it should.

We have ultimately been denied justice after Hillsborough. Attempts to blur the truth and shift blame have continue unabated for decades. Even now they continue, despite the overwhelming weight of evidence that supporters played no part in the disaster and that there was an orchestrated cover-up.

It remains a national scandal and a wound sections of the establishment won’t allow to heal.

If there is to be any positive legacy from the events of 1989 it has to come in the form of a Hillsborough Law and an end to the rewriting of history. But deeper than that, the British people need to think more critically. Too often in the last 32 years we have battled not just officialdom but public opinion too.

The country hasn’t always marched at our side. I hope all those who doubted the campaign will now reflect on that and realise that if they tolerate this, then it could well be them or their loved ones fighting a lonely battle for justice one day. Is that a forlorn hope? Maybe it is, but in the end that’s all we have now.