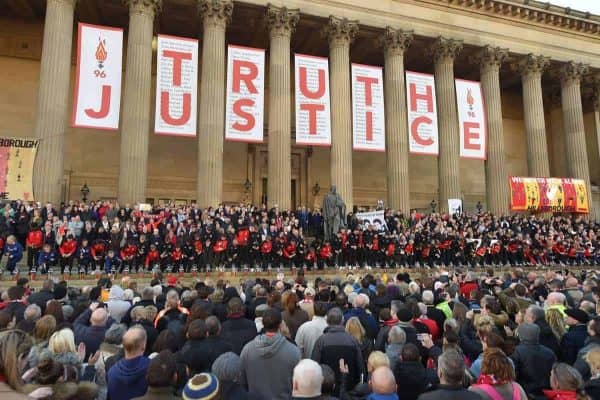 Hillsborough: THE TRUTH – THEY LIED

The findings of the Hillsborough Independent Panel have been released today and the results have been revelatory.

Some of the findings of the report include;

• 31 victims could have had reversible asphyxia after the 3.15pm cut off point.

• 28 victims did not have obstruction of blood circulation and that 31 had evidence of heart and lung function post 3.15pm.

• Police took blood alcohol levels from children and the dead.

• If no alcohol was found, police ran criminal records checks on victims.

• 164 statements were amended, including those of ambulance service personnel.

• Multiple factors were responsible for the deaths of the 96.

• The fans were not responsible.

• The source for the allegations made by ‘The S*n’ were filed by White’s News Agency, a Sheffield-based company. They were based on meetings over three days between agency staff and several police officers, together with interviews with Irvine Patnick MP and the South yorkshire Federation Secretary, Paul Middup.

Brits often mock and joke that many foreign police forces are ‘corrupt’ – today we have confirmation that not only were our police corrupt, so were the government. A concerted campaign involving senior members of parliament and police started immediately in the aftermath of the disaster to shift the blame and cover-up the failings of the police and establishment.

We hope now that the findings of the inquests are overturned and a full public inquiry is ordered.

Hopefully the findings of the report can finally end the myths and lies that have surrounded the disaster and the victims and survivors can be freed of the blame that was wrongly smeared upon them.

Essentially, the HIP findings have confirmed what families and supporters have said for 23 years – that this was a smear campaign lead by the establishment on an unprecedented scale.

And finally, this is being referred to as “new evidence” — it is NOT, it is hidden evidence.