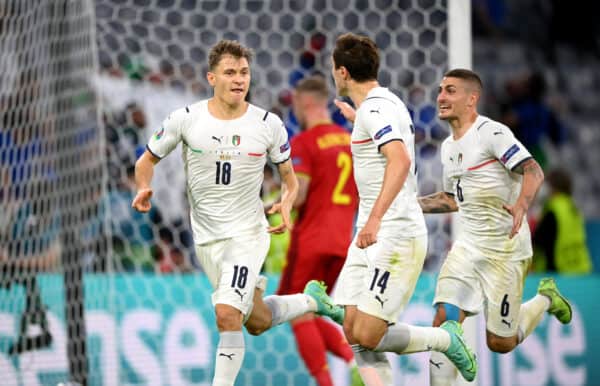 Euro 2020 has reached the last-four stage and we have just three matches remaining. It has been a hugely enjoyable few weeks – and it’ll get a whole lot better for one nation.

First up on the semi-final stage is Italy against Spain.

The Azzurri might have been the most impressive of all 24 nations to have reached these finals, in terms of tactical balance, bench options and attacking style.

But Spain have perhaps grown into the tournament as it has gone on, have a manager who knows how to win and a younger, more rotated squad – this should prove an intriguing spectacle, even if one side is a clear favourite at kick-off.

Italy. As noted, they have been the best team at the tournament so far, but that counts for nothing if they fail to turn up just once.

This might be the first game of the tournament where they don’t dominate huge stretches of possession, and the expectation would be that for those moments, their defence is good enough, organised enough and familiar enough to withstand the Spanish onslaught…except at left-back, now.

Roberto Mancini hasn’t lost a game with the national team since September 2018 – has only even drawn five times since then! – and he is closing in on a deserved and incredible success, but there’s simply no room for error at this stage.

The greatest defensive midfielder in modern history, now past his prime and bypassed by pace, but still capable of raising his game and protecting the defence by his reading of the match and positional play, and more than the odd sly foul.

Spain, simply put, need him to be at his very best against the blue swarm in the centre of the park, because the defence isn’t good enough.

Barella, on the other hand, is the most energetic and attack-minded component of the trio for the Azzurri, always looking to get into the box, brilliant in carrying the ball and full of confidence after a title win, a starting spot with Italy and a brilliant quarter-final goal.

Emerson Palmieri is the other left-back for Italy, but if they want to replicate Spinazzola’s driving runs and right-footed approach to cutting in around the box, perhaps the original starting right-back of the tournament – Alessandro Florenzi – will come in instead.

Andre Belotti could come in for Immobile but it seems unlikely – no other changes are expected unless there are injuries.

For Spain, Luis Enrique could well replace Sarabia with Olmo once more. Ferran Torres probably remains in, but Gerardo Moreno or finally starting Oyarzabal are other options.

Pau Torres or Eric Garcia? That’s the big question at centre-back – neither have overly impressed alongside Laporte and it’s just the three central midfielders – and Alvaro Morata – who seem fixed points.

Thiago in the Spain squad again, but he’s almost certain to be sub once more.

Italy to continue their rampage and make the final.