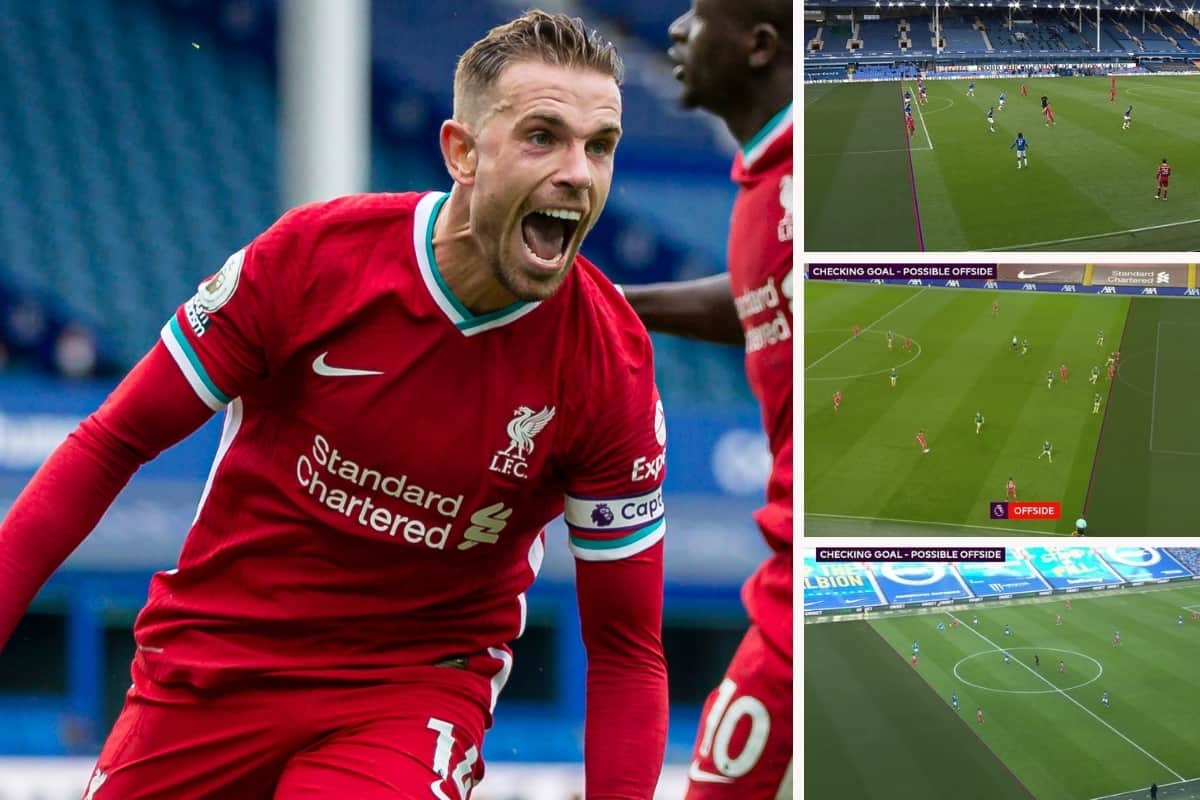 Liverpool would have seen at least three of their five goals ruled offside after VAR review in last season’s Premier League stand if they were to happen this campaign.

The Premier League is presiding over a series of changes to the way referees approach major decisions from the current campaign, including how VAR judges offside decisions.

Last term saw Liverpool have five goals ruled out after VAR checks on offside, with 32 goals disallowed for offside across the top flight, but PGMOL general manager Mike Riley has insisted 20 of those would stand this time around.

While a confirmed list of those 20 offside goals has not been made available, ESPN‘s Dale Johnson has cited three scored by the Reds as examples.

One of those was Jordan Henderson‘s last-minute ‘winner’ in the Merseyside derby in October, with Sadio Mane deemed marginally offside – seemingly by the fringes of his shirt – in the buildup.

The derby ended 2-2, with Henderson’s dramatic strike dismissed in a bitter blow to Liverpool, who saw both Virgil van Dijk and Thiago suffer long-term injuries at Goodison Park.

Meanwhile, two Mohamed Salah goals are likely to have stood were they to have been scored this season – which ostensibly would have won the Egyptian the Golden Boot.

The first of those came in the 2-1 win over Sheffield United, while the second was in the 1-1 draw with Brighton in November, suggesting that – along with the draw with Everton – Liverpool dropped at least four points due to doubtful offside calls.

“On marginal offside, we’ve now effectively reintroduced the benefit of the doubt to the attacking player,” Riley has explained.

“Where we have a really close offside decision, we carry on following the same process that we did last season with the one-pixel lines; we’ll then put on the thicker broadcast lines, and where they overlap those situations will now be deemed as onside.

“What we give back to the game is 20 goals that we would have disallowed last season by using quite forensic scrutiny.

“So it’s the toenails, the noses of the players who are offside; they might have been offside last season but next season they won’t be.”

It is likely that Roberto Firmino‘s goal against Aston Villa at Anfield, ruled out due to Diogo Jota‘s arm being offside, would still not stand were it to occur this season.

However, the hope will be that there is less in terms of grey area when it comes to these decisions, and more and more frequently these will benefit the attacking side as this is in the best interests of those watching the game.