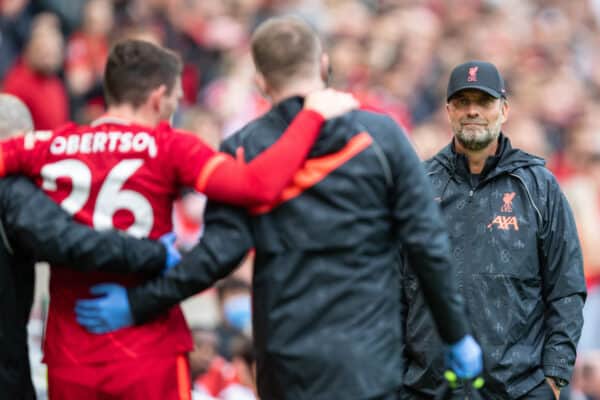 4 key reasons to be optimistic about Andy Robertson’s injury

Andy Robertson injured his right ankle in the friendly vs. Athletic Club, but reports from Anfield suggest it is not as bad as it might have been feared.

The player was clearly in an immense amount of pain with team-mates surrounding the dynamic Scot.

His reaction and perhaps viewing of the ankle turning inwards – the typical mechanism for inversion ankle sprain injuries that damage the lateral (outer) ankle ligaments – in painful slow motion on social media channels may have led to a collective ‘here we go again’, with memories of last season’s injury-riddled campaign still on the horizon.

However, pain is hardly a reliable indicator as each player – and person – will have a varying response to injuries.

When it comes to Robertson’s injury and subsequent layoff, there are four signs that it could be a more positive situation than it perhaps could have been.

A more reliable – and positive – indicator was Robertson being able to walk off the pitch while bearing weight on the ankle, albeit with help from club doctor Jim Moxon and physio Chris Morgan.

Being able to bear weight on the ankle – specifically taking three steps – is part of what’s known as the ‘Ottawa Ankle Rules’ that in combination can quickly and reliably rule out a fracture.

These rules were initially created to reduce the need for X-rays in the medical setting and therefore reduce medical costs.

Although perhaps obvious, those rules are specific to the ankle. These do not apply to other body regions.

For example, you may remember Virgil van Dijk walking off the pitch and down the sidelines after his knee injury in October.

Obviously, that ability to bear weight did not preclude him from having major ligament damage that required surgical repair.

Thanks to everyone for the kind messages and support. Scan suggests nothing too major but there’s some ligament damage which will need to mend. I will be grafting every day so I can help the team again sooner rather than later. Good luck to the boys playing tonight #YNWA pic.twitter.com/urKPCLmHgS

There are three key things to pay attention to here.

Firstly, is his statement of “nothing too major but there’s some ligament damage.”

Secondly, that although he’s wearing a CAM protective boot, he was bearing weight through the ankle.

Thirdly, using only one crutch means that although he’s on modified weight-bearing, it’s not as highly modified as higher-severity ankle ligament tears would be.

Each of these points toward a lateral ankle ligament tear that is moderate rather than severe in nature.

It was reported that Robertson will miss weeks, rather than months.

Reinforcing each of those indicators and perhaps most telling was Jurgen Klopp stating that the Reds “got lucky” and Robertson may even be able to return prior to the international break (meaning the Chelsea game on August 28).

That possibility would require the player to return to training in roughly two-and-a-half weeks.

The fact that he hasn’t been ruled out for that timeline immediately signals a moderate grade 2 tear rather than a grade 3 tear which would have almost assuredly and quickly ruled him out until after the international break.

Each of these indicators paints a favourable picture of Robertson’s injury and is another example that ankle sprain injuries and reactions to them can look much worse on video than they truly are – it’s all about using reliable indicators.

While Robertson progresses through his physio, the key metric will be testing ankle instability while maintaining range of motion and strength.

The focus is, of course, to get the player back to the pitch but also mitigate re-injury risk as any inversion ankle sprain increases the subsequent risk for another sprain (ankle sprain clusters).

In the meantime, this could be Kostas Tsimikas‘ chance to show his level – or perhaps James Milner to show off his versatility yet again.