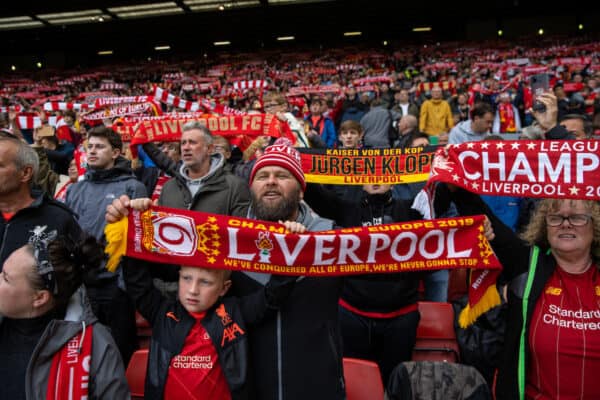 Liverpool have provided an update and guidance on the new ticketing process to help avoid the same problems that led to a 30-minute delay to Sunday’s kickoff.

The Reds welcomed back 40,000 Reds on Sunday for the penultimate pre-season friendly against Athletic Club, but ticketing issues would force kickoff to be pushed back 30 minutes.

Fans were unable to get into the stadium with the NFC technology causing mass problems, to which the club issued an apology for.

And with another game tonight against Osasuna, Liverpool have issued an update and guidance for supporters who are set to attend for the 7pm kickoff:

And the full guidance for fans reads:

Liverpool FC would like to update supporters on its new entry process to make access quicker and more efficient ahead of tonight’s pre-season match against CA Osasuna, kick-off 7pm.

We would like to thank everyone who attended the first pre-season home game yesterday against Athletic Club for their patience and understanding while accessing Anfield.

With a number of changes having been made to the way fans can now use their tickets at the turnstiles, these pre-season games have been a trial to test the new NFC technology and the new entry system at Anfield.

Some issues were identified while fans were entering the stadium yesterday and following a full review and debrief of the process, improvements and key learnings have been made ahead of tonight’s match.

Turnstiles will open at 4pm today and we are encouraging supporters to arrive early. Kids who enter the stadium before 6pm can receive free soft drinks as a thank you.

Supporters are also asked to ensure they are fully prepared when they come to the turnstiles, making sure that they have downloaded their NFC pass to their phone and are ready to scan their tickets when reaching the turnstile.

We are strongly encouraging families and groups, where possible, to print their e-tickets off at home, so phones do not have to be passed back and forth to get groups through the same turnstiles, this will speed up the entry process.

We look forward to welcoming more fans back to Anfield and thank you for your continued support and understanding.