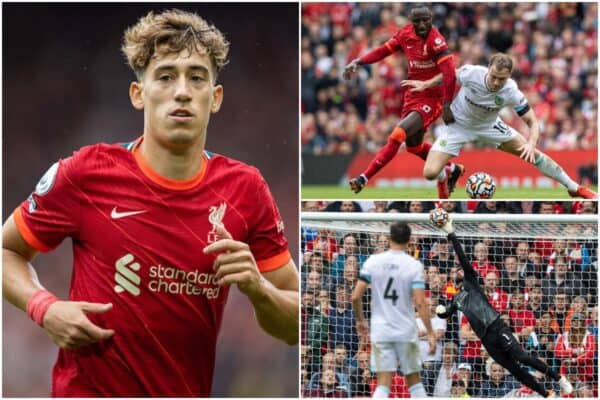 Liverpool’s 2-0 win over Burnley was impressive in so many ways, not least of all the fact it sent the Reds top of the league. Don’t care if it’s after two games, we’re top and we’re staying there.

Diogo Jota and Sadio Mane notched the goals, the fans sang in the stands and the Reds took the points.

In and among those highlights were several other important moments, performances and inclusions in the line-up, as the team who ended our long unbeaten league record at Anfield were well and truly put to the sword.

Fans took to social media afterward to point out the many impressive players on the day and highlight what made the difference against the Clarets, and it’s clear that optimism remains rife in the Red half of Merseyside.

Here are the five things from the game the fans are talking about most:

Kostas Tsimikas and his face-first tackle

Losing Andy Robertson is not a good thing. But guess what? For the past year, we’ve been hiding on the bench and in the physio room a near-replica.

Kostas Tsimikas has started the first two games of the season now and his all-action display endeared him to the Anfield crowd, particularly one late surge which saw him carry the ball away from multiple tackles even though he was on the ground and somewhat injured from moments earlier.

Kostas Tsimikas has been refreshingly good at left-back. He’s tenacious in everything he does from retaining possession to overlapping and providing goal-scoring opportunities. Greek Scouser. pic.twitter.com/qpertT0RJ9

A little snapshot of the ovation Kostas Tsimikas has just received after a performance with which he can be extremely satisfied. pic.twitter.com/CKDOlKYTOE

How amazing was that bit near the end where Tsimikas just kept battling, getting knocked around and came out with the ball? Those moments, in front of crowds, are how squad players become fan favorites. Brilliant stuff.

Tsimikas just made himself a crowd favorite. He's a little gladiator.

big question is, can we play with two left-backs every week

Now Jurgen has a bit of a dilemma…the returning Robbo or the in-form Greek Scouser for Chelsea?!

Return of the fans in a packed Anfield

Over 50,000 fans, over 500 days apart. Not since the Atletico game, two seasons ago now, has Anfield been so full.

It was majestic, memorable, emotional and vital, and the players loved it as much as the supporters.

Great win, great performance, great day. Back at Anfield and we are all in this together again. Can’t put it into words. pic.twitter.com/xQuag4igT7

A full house of supporters back at Anfield and we pay tribute to the 97 and show our support for welcoming refugees fleeing oppression & war. No wonder the Tories hate us. #JFT97 #LFC #ScousePower pic.twitter.com/qOy4MHrhaU

Things we should never, ever take for granted. ?#LFC pic.twitter.com/qt0yhod1H4

Liverpool FC made the most impactful addition to their squad this season, the 12th man. Was wonderful to see fans back at Anfield today. With the Kopp back in full swing, I feel like we can seriously challenge for the title this year.

Just one week until we can all go back and do it again!

Naby has come in against Norwich and Burnley, filled the Gini Wijnaldum void and barely put a foot wrong.

Star showing, flashy creativity, non-stop forward-thinking threat? Nope. But doing the perfect job, sorting the tactical side to perfection and – importantly for the No8 – staying fit for two 80-minute run-outs? Yes. And that’s vital.

I see Naby Keita is already taking the Gini role in some fans views.

When are people going to realise it's the position, not the player.

In this team, it's a selfless, unglamorous but absolutely vital role.

Keita has played two games on the bounce without getting injured.

When someone says Naby Keita is finished at Liverpool ? pic.twitter.com/G2nkiqHr2S

Consistency and fitness – he’s on the right path.

Teenagers getting a chance under Jurgen Klopp isn’t a new phenomenon, but usually the starts come in the cups.

Harvey Elliott was thrown straight in against Burnley, his first Premier League start for the Reds, and he played a full part in a very good victory.

Klopp’s face when he got asked about Harvey Elliott’s performance today was boss. ? pic.twitter.com/xN38oYht2K

Harvey Elliott is what City fans pretend Jack Grealish is

Harvey Elliott's first full 90 minutes in the Premier League, at the age of 18, was immense, he looks so comfortable and always poses a danger. A very special talent! #LFC

Do you know why you were able to see Harvey Elliott play today? It’s because we didn’t sign a midfielder that would’ve blocked his progress. Sometimes you just need to play the lads you already have.

So much more to come from this kid.

Alisson Becker, back to his best

Half of his big saves were when the flag was up anyway – he didn’t know, and made top stops. His last, late one was a beauty.

These are the games where you see how valuable Alisson is to Liverpool. His cross claiming alone has killed at least 5 Burnley attacks so far.

Been outstanding the past two games, 6 crucial saves inside the box so far to keep both clean sheets. ??? pic.twitter.com/Jyq2mq9nZq

Alisson in the black kit
pic.twitter.com/D9GmQauBsu

I WANT A APOLOGY FROM EVERYONE WHO COMPARED THEIR GOAL KEEPER WITH ALISSON NOW.

Lol and they thought Alisson was on a decline.. He's coming for the golden glove

Another one of those next week would be very much appreciated!