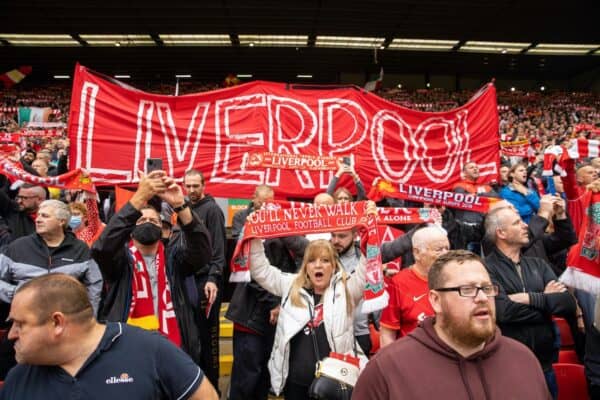 ‘Nothing better’ than a packed Anfield as Liverpool enjoy ‘perfect day’

Liverpool ran out 2-0 winners over Burnley in the first home Premier League game of the season and for the players, the result was just one of three great parts of the day.

After a thumping win over Norwich on matchday one, carrying on the performance level and points tally was as usual important in the next game – yet there’s no question the result was a little secondary on this occasion.

Well over 500 days after the last time Anfield was full, fans flocked back to the famous old ground to pack it out and support their team once more.

Diogo Jota and Sadio Mane found the back of the net in a 2-0 win – Mo Salah did too, only to be ruled offside – on a day which was emotional for several reasons.

First and foremost, captain Jordan Henderson was delighted to welcome back the fans with a win, pointing out the big difference between this season and last year already, and noting the supporters will be vital as the campaign goes on.

“It was the result [we wanted]! No, I think the performance was good at times. There’s still places where we can improve of course, but overall we’re delighted – the fans are back, it was great to have them back, they gave us a lift. And we got the result in the end, so that’s the most important thing.

“Yeah, [having fans back] keeps you going at times, definitely, the emotional side of it. Burnley are a good side, they make it difficult – we knew that before the game and they certainly did that with the set-pieces and long balls in behind. But I thought overall we dealt with it quite well and we could have scored more goals, if we’re being honest.

“Always Anfield people will not like to play, I’m telling you now.

“Without a crowd it’s a totally different game, football was totally different last season with no crowd – not only at Anfield but in general. Now we’ve got the fans back it’s a different ball game. And hopefully we can keep our fortress, if you like, and teams won’t like coming here. We’ve got to make it difficult every time they do.”

Henderson’s thoughts on the matter were echoed by his team-mates, who were delighted to be back on home soil for a first competitive game of the season.

And more than that, of course, it was being back in front of tens of thousands of Kopites, each of whom savoured the moment of togetherness and shared passion when the ball hit the back of the net thanks to Diogo Jota and Sadio Mane.

No better start to the weekend than that. So good to have a full Anfield again ? pic.twitter.com/WfwBTfEOtJ

Full Anfield stadium plus 3 points. Nothing better. It’s good to be back ??? pic.twitter.com/VpRBFxcHqJ

As much as the atmosphere was the big talking point, the Reds were also there to do a job.

Several others players revelled in the three points and the second win of the season, setting the Reds up nicely to head into a big game next weekend.

And fittingly, on the day LFC remembered and paid tribute to Andrew Devine, the 97th Hillsborough victim was also in players’ thoughts.

Captain Jordan Henderson laid a wreath pre-game to mark the occasion, before the team got to work on the pitch.

Andrew was one of us and will always be one of us. May he rest in peace. #YNWA https://t.co/EswTQ35OdM

Now it’s back to base camp Kirkby for another week of training and preparations, building fitness and forming the tactical plan, before Jurgen Klopp and his team welcome the Stamford Bridge horde to Merseyside.

Then, Chelsea and one of the first big tests of the season will await for Anfield’s second full house of the campaign.