Diogo Jota scored yet another header as Portugal brushed Azerbaijan aside to win 3-0 on Tuesday, with Liverpool hailing the striker’s unexpected aerial ability at just 5’10”.

Since arriving at Liverpool last summer, Jota has proved himself a reliable source of goals for both club and country, with the £45 million paid to sign him from Wolves a bargain fee.

The 24-year-old looks to have supplanted Roberto Firmino as Jurgen Klopp‘s first-choice striker, while he is carving out a regular role in the Portugal side, too.

Tuesday night saw Jota make his 13th start for his country, in a World Cup qualifier away to Azerbaijan that saw him score one and assist another on the way to a 3-0 victory.

It brought Jota’s eighth goal for Portugal, seven of which have come since making the move from Wolves to Liverpool last September.

Remarkably, it saw him score yet another header, with half of his goals at senior international level coming from his head, despite not being the tallest striker at 5’10”.

Jota appears to have developed a knack for being in the right place at the right time, along with the jumping ability and heading power to consistently score from those situations. 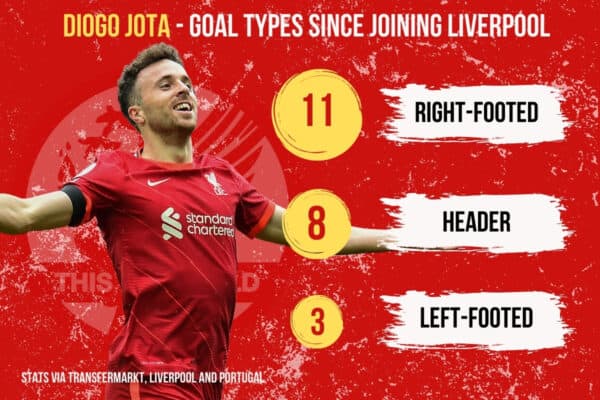 In fact, of the 22 goals Jota has scored for club and country since joining Liverpool, eight have been headers – an impressive 36.4 percent.

For Liverpool, four of his 15 goals have been headers, or 26.7 percent.

He is not the first average-height player to score an unexpected number of headed goals, of course, but after his latest, fans took to Twitter to hail his surprise talent:

Diogo Jota is just a sublime player in the air. You'd think because of his height, his aerial ability wouldn't be a strength or pro but the guy puts that assumption to bed. Has immense technique, control & power with his heading ability

Diogo Jota’s better in the air than Denzel Washington in Flight.

How a lad so small, constantly finds so much room in the box to get a head to it. I know 5ft 10 isn't exactly tiny, but up against 6ft3+ centre halves, it's fairly small.

We got him for a steal!!

Considering Diogo Jota is around 5’10, his heading ability is absolutely world class

Diogo jota is like Tim Cahill in the air. Idk how he does it but he scores with every header ?

Good to see Mane and Jota scoring ahead of the weekend.

Jota has begun the campaign in fine form for Liverpool, with two goals in three games as he found the back of the net in starts against Norwich and Burnley.

In his second season at Anfield, fans are tipping the No. 20 for even bigger things:

Things I will never understand:

1. Why Wolves were willing to sell Jota
2. Why they sold him so cheap
3. Why nobody else was even thinking about buying him pic.twitter.com/nJpUaVpzHB

Get the feeling that Diogo Jota is going to have a very special season.

I'm forever astounded by how much better he is than I thought he was.

It is clearly an area Jota has worked on, having only scored twice with his head before 2020, and this new-found aerial threat can only benefit Liverpool.

With Klopp moulding the Portuguese into a central striker who can fill in out wide, as opposed to the natural winger he resembled upon his arrival, this is a very important asset.

Hopefully, it can give Liverpool another edge for years to come.