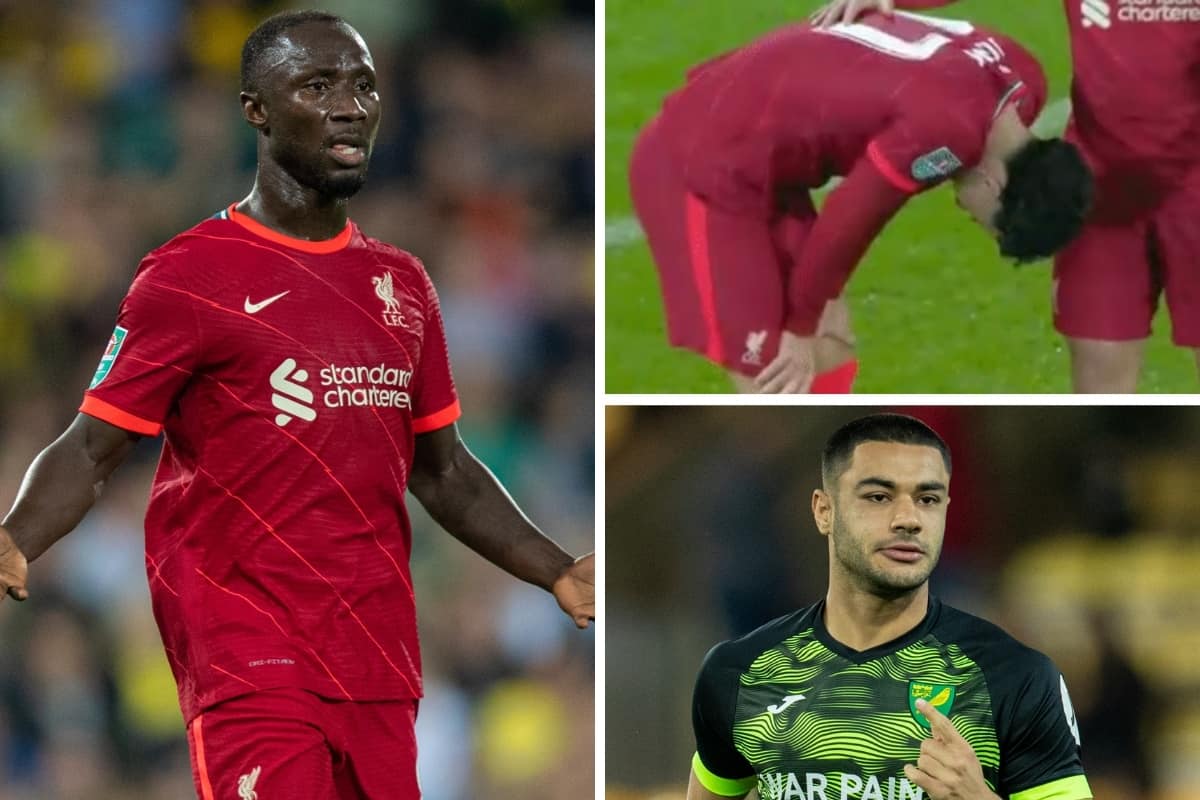 There was a reunion, a rabona save and predictable Naby Keita injury as Liverpool, booked their place in the fourth round of the League Cup at Norwich‘s expense.

Takumi Minamino (twice) and Divock Origi fired the Reds to a 3-0 victory at Carrow Road, progressing from the League Cup‘s third round for the fourth time in Jurgen Klopp‘s reign.

It was a night of many positives for Liverpool, not least debuts for Kaide Gordon, Conor Bradley and Tyler Morton, and it being a cup game with nine changes to the side, it was a much different watching experience.

To an extent, the pressure seems off in these fixtures, which can lead to a more enjoyable game unfolding for supporters.

Here are five things fans are talking about after Liverpool’s 3-0 win.

Neither Nat Phillips nor Ozan Kabak made it onto the pitch on Tuesday night – with Phillips’ omission a discussion for another day – but they were seen catching up on the touchline.

In many ways, it shows how far Liverpool have come with their defensive ranks in recent months, with Joe Gomez back as captain and Ibrahima Konate making big steps alongside him.

Ever seen a ‘keeper save a penalty with a rabona?

Into Kelleher saving pens with a rabona btw, more keepers doing that please

It's over for Mr. Becker.

Whether Caoimhin Kelleher meant it or not is very much up for debate, but the Irishman should certainly be claiming it!

After coming off the bench to score a stunning volley against Crystal Palace, Keita was lacklustre as one of the three starters in midfield.

When he was withdrawn at half-time, with the impressive Morton taking his place, it was expected to have been a pre-planned substitute – but as Klopp revealed after the game, the change came due to a minor injury.

“Naby, in the first half, he kicked the grass,” the manager told Sky Sports.

“Something in the capsular. I don’t think it’s serious, but we didn’t want to take any risks. That’s it.”

Scores a screamer on Saturday.

This, my friends, sums up Naby Keita's Liverpool career so far.

Seems like Tsimikas got a bit excited here – thankfully Curtis Jones was OK!

It was a memorable night for Liverpool, with 16-year-old Gordon and 18-year-olds Bradley and Morton making their first appearances for the senior side.

With Kelleher and Jones also on the pitch, there were five academy graduates involved for the Reds, which is a testament to the great work within the youth system.

Another proud night for the #LFCacademy

The work going on down there is top drawer from the players, to the coaches, to everybody else responsible for giving these lads the best possible chance

As Liverpool are now through to the next round, there could be more opportunities for these youngsters – and perhaps even James Balagizi, who was an unused substitute on the night.