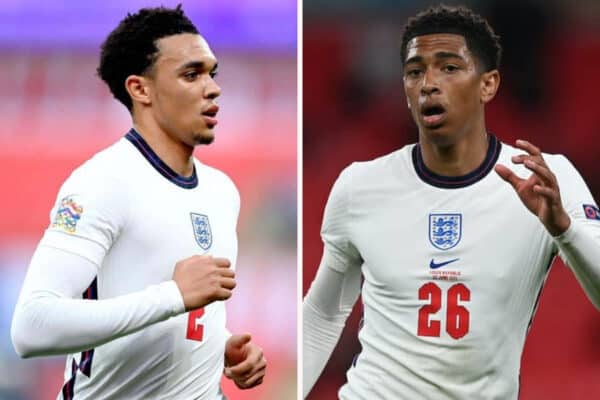 Trent Alexander-Arnold‘s surprise stint in England’s midfield lasted only 45 minutes, with Jude Bellingham the star in the middle of the park against Andorra.

In the buildup to England’s second World Cup qualifier of the September break, much of the talk was on Alexander-Arnold’s proposed switch into midfield.

With Gareth Southgate seemingly oblivious to the world-class right-back at his disposal, the 22-year-old was left to take up duties in a three-man unit as Reece James instead started in his natural position.

Perhaps unsurprisingly, it was a quiet first half for Alexander-Arnold at Wembley, bar a handful of smart passes and clever runs into the box, with the manager then swapping him and James at the break.

It was a game that saw Jesse Lingard score first, before Harry Kane’s second-half penalty, a long-ranger from Lingard and a header from Bukayo Saka sealed the win.

A quickly taken short corner sees birthday boy Saka get in on the act#ENGAND | #ITVFootball pic.twitter.com/1NDpCKHcbk

Quick thinking from a corner saw Alexander-Arnold play a big part in England’s fourth goal, flexing his creative muscle after returning to right-back.

Jordan Henderson captained England in the No. 6 role, with his incisive passing play giving the Three Lions a platform to build on in front of two more rudimental centre-backs in Tyrone Mings and Conor Coady.

Starting alongside Henderson and Alexander-Arnold in the engine room was Bellingham, and it was the 18-year-old Dortmund midfielder who most caught the eye.

Despite his young years, Bellingham is a player whose physicality and technical quality allow him to dominate the midfield battle, with his intelligence and quick feet making light work of lowly Andorra.

Liverpool have been credited with an interest in the teenager in the past – and scouts will undoubtedy be keeping an eye on his progress at Jurgen Klopp‘s former club – with fans enamoured by a youngster who idolised Steven Gerrard growing up.

And as England coasted to a comfortable 4-0 victory, Reds supporters took to Twitter to express their desire to see him make the move to Anfield:

I want Liverpool to sign Jude Bellingham next summer.

He is a very, very good at association football.

If Jude Bellingham isn’t a Liverpool player next season I’ll be fuming.

Trent and Bellingham in midfield: pic.twitter.com/Hf3IWD9PtY

Liverpool should go all out and sign Jude Bellingham @LFC pic.twitter.com/ve93w67o2m

maybe klopp can get a 20% off discount on bellingham from dortmund for his past connection to the club ?? pic.twitter.com/tIlAmJ3sWg

Dortmund will drive a hard bargain for their No. 22 – who joined from Birmingham for an initial £25 million in 2020 – as shown with the sale of Jadon Sancho to Man United this summer.

But with three of Liverpool’s senior midfielders over 30 – Henderson, Thiago and James Milner – and two others into the final two years of their contract – Naby Keita and Alex Oxlade-Chamberlain – a major acquisition may be required.

Harvey Elliott and Curtis Jones can be mainstays in the middle of the park for years to come, as will Fabinho, but bringing in a player of the potential of Bellingham would be a real coup.

It would clearly be a better option than transitioning Alexander-Arnold from right-back, with his talents wasted in a congested midfield.