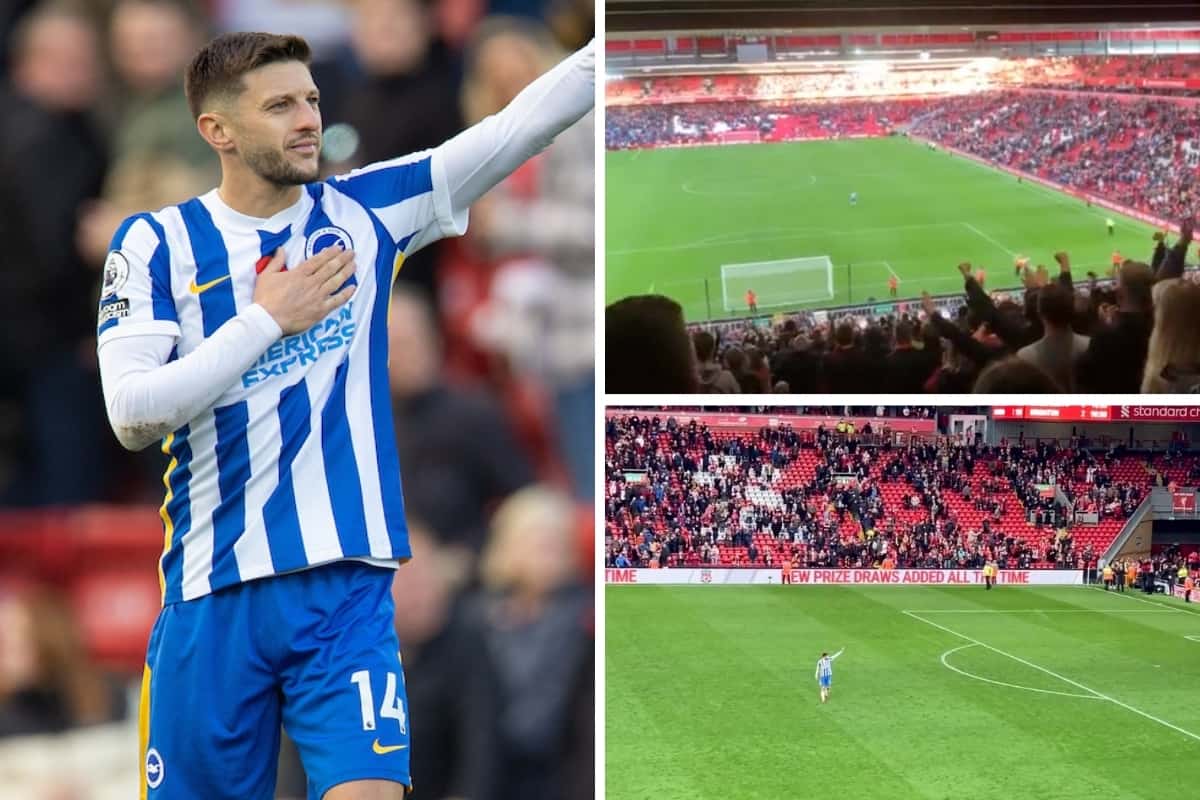 Though it was a frustrating afternoon for Liverpool fans, those inside Anfield showed class in staying behind to applaud Adam Lallana after Saturday’s 2-2 draw.

After the highs of a 5-0 thrashing of Man United and chasing Chelsea at the top of the Premier League, the Reds were dealt a blow by Brighton this weekend.

Goals from Jordan Henderson and Sadio Mane were cancelled out by Enock Mwepu and Leandro Trossard, with Brighton perhaps deserving more than a point after taking the fight to an unbeaten Liverpool.

Central to their dominance for much of the game was Lallana, who conducted play in an advanced midfield role, claiming the assist for Trossard’s equaliser.

Ahead of kickoff, Jurgen Klopp insisted the 33-year-old was “one of the best players I ever worked with,” and called for the supporters to give him the reception he deserved before and after the game.

Those within Anfield made sure to do so despite the disappointment of two points dropped, with Lallana taking a lap of appreciation following the final whistle.

Adam Lallana, who never got to say goodbye to the fans, has a little lap of thanks at Anfield. pic.twitter.com/nAEsOrdUbK

Despite the result being far from what Liverpool had hoped for, it is warming to see Lallana enjoying regular starts as part of an ambitious Brighton side.

Saturday was his ninth start in the Premier League this season, having come off the bench in the opener, with the draw putting the Seagulls into sixth.

The sight of the Kop applauding Lallana at full-time was received well by fans on social media:

Pleased Lallana got a deserved (and delayed) ovation. Easy to forget how integral he was at the start of Klopp’s reign. While injuries limited his game time towards the end he clearly remained an influential presence within the squad. Could have done with him today!

Loved seeing Adam Lallana staying behind to applaud the fans ??

Two highlights today – finally being able to give Adam Lallana his well deserved fair well and those two kids running on the pitch after the match showing more determination than half of the team today.

… on a happier note: Adam Lallana cheered by the home fans as he walked around the pitch after final whistle. All that was missing from this lovely moment was Lallana getting hold of a spare ball, turning with it, turning with it again, then playing a square pass to Emre Can. pic.twitter.com/h5W5bcOQ5s

Wholesome scenes on a bitter day for Liverpool.