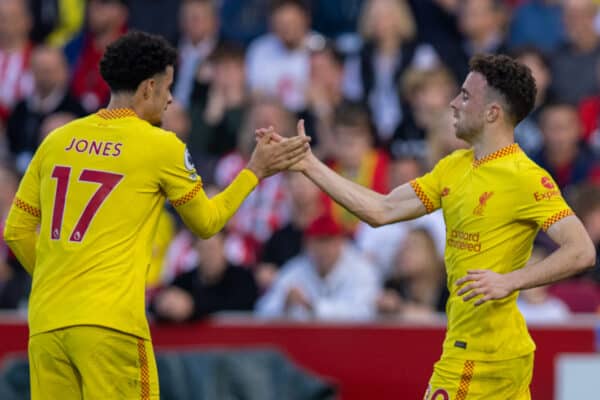 Both Curtis Jones and Diogo Jota are in doubt to feature for their respective countries in the coming days due to fitness concerns.

The Reds’ medical department have not been short of injury concerns at the start of the season, with the likes of Trent Alexander-Arnold, Thiago, Harvey Elliott and James Milner all needing treatment.

The international break is always a time for those like Alexander-Arnold and Thiago to press ahead in their recovery, but equally as stressful as Reds hope for no further injuries for those representing their country.

And while not currently considered serious, both Jones and Jota have had to sit out of training sessions, and in the former’s case a game, due to respective niggles.

Jones missed England U21’s clash with Slovenia on Thursday night having been expected to start with manager Lee Carsley revealing the 20-year-old experienced “tightness in his groin.”

But, importantly, stressed that the Young Lions will not push Jones or force his recovery ahead of their final fixture against Andorra on Monday evening.

“He had a bit of tightness in his groin area. We will never put players in a position where we will risk them,” Carsley explained.

“We’ll monitor the situation looking towards Andorra but we will not be putting him under any pressure to play.”

Jota, meanwhile, has not been present for Portugal’s training sessions ahead of their friendly against Qatar on Saturday “due to muscle problems”, as per SAPO Desporto.

It leaves him in serious doubt to feature but as a consistent starter for Fernando Santos Portugal are anticipated to be patient ahead of their World Cup qualifier against Luxembourg on Tuesday.

The hope will remain both are just minor issues but it’s a far from ideal situation for either with Klopp expected to push on with steady rotation as Liverpool are to contend with seven games in 22 days following the October break.