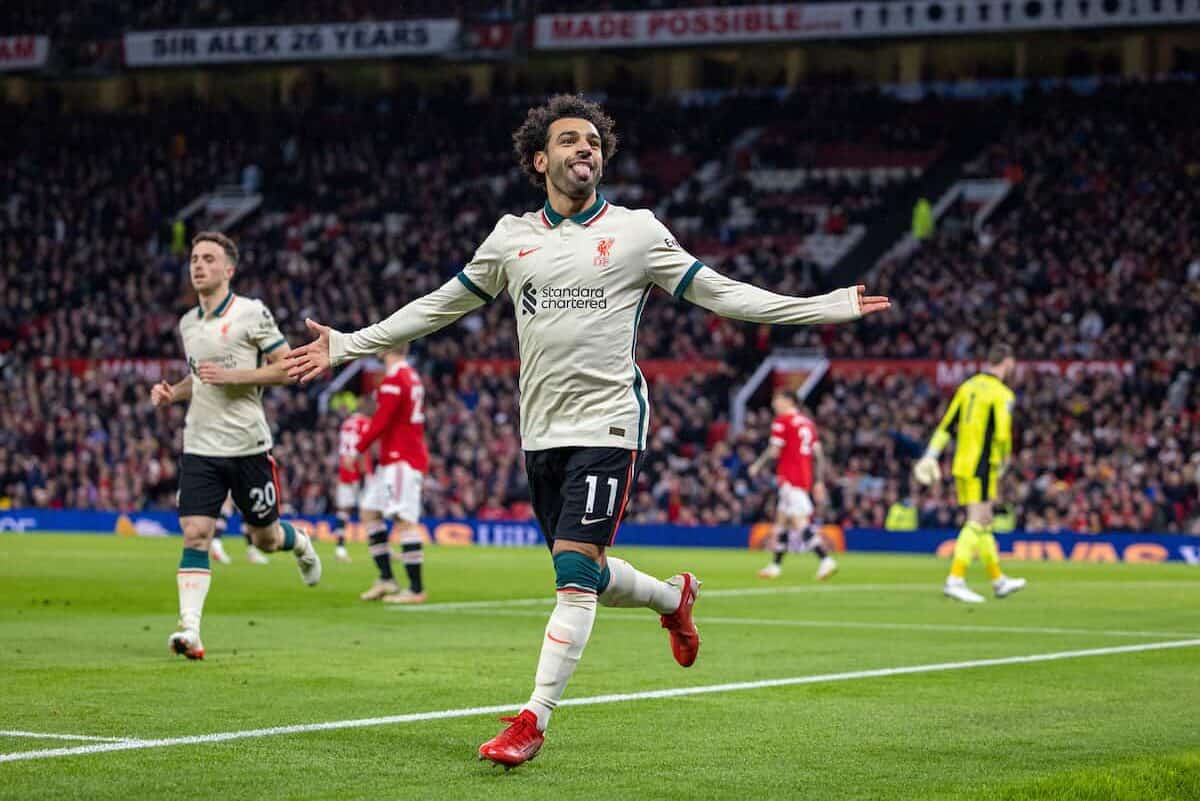 Liverpool dished out a devastating 5-0 win at Old Trafford having turned on the afterburners to well and truly punish Man United, and fans were euphoric with the result.

Old Trafford has inflicted deep wounds for Reds in years gone by, but the current group dished out some serious pain of their own to United thanks to a scintillating performance.

For the second time in as many games, Naby Keita was on the scoresheet to get the Reds off to the perfect start with Diogo Jota then adding to the misery after capitalising on one of many defensive blunders.

The travelling Kop increased the volume level inside Old Trafford and would serenade Mo Salah as he added a further two first-half goals – continuing his record of scoring for 10 games in a row.

The hat-trick would soon arrive for the world’s best player as the humiliation continued and United fans left in their droves, but injuries to James Milner and Naby Keita would be the low points.

Here’s how supporters reacted to the thumping win on Twitter, Facebook and This Is Anfield’s comments section.

Oh the fun of it all, Reds rightly revelled in the win!

I think this might currently be my favourite Liverpool game of all time. Genuinely.

Seriously, Klopp needs to calm #LFC down here, because they’ve already entered manager-sacking territory…and surely no one on Merseyside wants that…???????

There’s a motorway marked “Ole Gunnar Solskjær must be sacked” and Gary Neville continues to go down a load of A Roads.

Preston away will be tougher and they’re 18th in the Championship.

Worth remembering that Jurgen Klopp rejected the Man Utd job in 2014, despite being told the club was 'an adult version of Disneyland.'

Salah was due his fair share of praise once more…

Salah hattrick at Old Trafford, a goal in 10 consecutive games and just unplayable. There are no more words for him. A God amongst men and someone Liverpool need to tie down. The best in the world.

John Henry when Salah gets a hatrick away to Utd during contract negotiations! pic.twitter.com/9rDRTa47u4

Salah has 15 for the season. The first Liverpool player to score a hat-trick at Old Trafford since Fred Howe in 1936.

Mo #Salah is an #LFC legend. Pass it on.

But it was team effort for a statement win …

Salah will grab the headlines but it’s been an absolute master-class from Roberto Firmino today. Ridiculously clever in everything he does.

Really unfortunate for Keita, who's been outstanding since one early lapse. That was about the fourth or fifth hefty challenge on him, which is a pretty good gauge of how good United think he's been.

This is absolutely staggering. This is turning into the Premier League equivalent of Brazil v Germany in 2014. The pass from Henderson to create the hat-trick for Salah!

“I hope this puts to bed all of the doubters when questioning team selection before the game. Superb team effort and so clinical.”

– Stevo in This Is Anfield’s comments.

“What a performance. Men against boys.” – Shaun Hannon
on Facebook.

An absolute demolition job. Liverpool far better than United and showed it in spades. Salah magnificent, but a real team effort. Keita fantastic, midfield worked so hard, defence superb. 5-0 at Old Trafford a real statement. The best of times.

In all seriousness this is the greatest Liverpool team you will ever see and these are the best times we will ever have and you had best be fucking enjoying them because this is it. This is it now.

And if the Reds hadn’t eased up it would’ve been 10. Sensational result from a truly brilliant Liverpool team led by a German genius. Up the 5-0 win at Old Trafford Reds #MUNLIV #LFC #PremierLeague

If any more evidence was needed that last season was an absolute freak this was it. Lots of pundits spouting nonsense United had overtaken us and were title contenders. We just needed our defence back. Huge gulf in class. #LFC.

Liverpool didn’t just beat Manchester United today, they utterly humiliated them. A brilliantly coached, special team – the complete opposite of opponents who boast one of the most expensively assembled squads in world football. Solskjaer shouldn’t survive this result.

Let us know your thoughts on the result in the comments section!