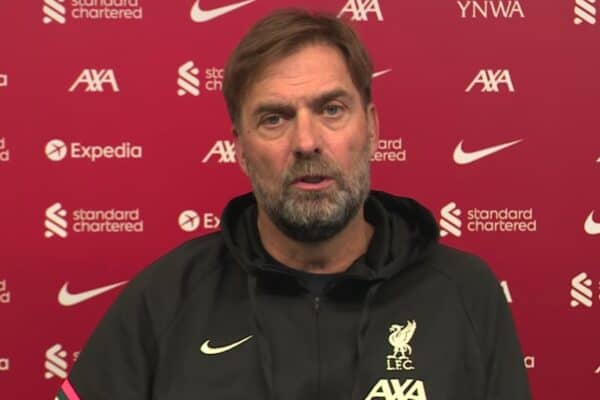 Jurgen Klopp provided some unwelcome injury news as he previewed what he expects to be a tough, but exciting Premier League meeting with West Ham.

Here are five key things from Klopp’s press conference at Kirkby on Friday:

The Hammers are just two points and two places behind Liverpool in the table and have been rejuvenated under the management of David Moyes.

As the joint-third highest-scoring team in the league and with only four clubs having a better defensive record, Klopp knows a tough test awaits.

“I don’t know if [Moyes] reinvented himself, but it’s absolutely incredible. A high energetic team, a counter-pressing team, counter-attacking but playing as well.

It’s not what we wanted to hear but Firmino is set for a number of weeks on the sidelines with a “serious” hamstring injury.

“Losing Bobby Firmino is a blow. I don’t need to verify that. We’ve known for two, three days. It’s a serious injury.

“I don’t know how long he will be out exactly but more than four [weeks], then we have to see. He is a quick healer.”

Klopp is hopeful that Curtis Jones, James Milner, Naby Keita and Joe Gomez will all be available soon after the international break.

3. Kostas vs. the best left-back in the world

It’s hard to think of a time Liverpool had two left-backs who could compete for a spot in the side, but they do now in Andy Robertson and Kostas Tsimikas.

And the latter has finally had his breakthrough and is reaping the rewards, as too Liverpool who now have options and the ability to rest and rotate.

“Kostas has a lot of quality, what I don’t like about this so early is what does it mean, push Andy Robertson? He pushes Andy Robertson, but in my view, Andy Robertson is the best left-back in the world.

“That makes it really tricky but it’s good that we have to option that we can give Robbo a rest in moments, even when he doesn’t like it or need it in his understanding.

“You need these quality players. He needed to adapt to all the things we do but this process is done now. He’s a really good football player and we’re really happy to have him.”

4. Are Liverpool underdogs in the title race?

“Can I?” was Klopp’s response to that very question but “we don’t consider ourselves at all like saying who we are [in the race],” as long as Liverpool are in it, that’s all that matters.

But Klopp knows this league is no easy task as it’s made a “big jump again.”

“The league is absolutely incredible. There’s no game at all where you go and think ‘yeah, you can rest him, him and him’. You have to be on your absolute top, constantly.

5. A team of leaders

Should Jordan Henderson feature, as expected on Sunday, it will be his 300th appearance in the Premier League for the club and his leadership and that of his teammates received praise from Klopp.

“After six years working together, he was the perfect choice [as captain]. The perfect role model for a footballer, a real leader.

“You have to share it and that’s what the boys do. Milly is a massive voice in this team, Virgil grew in that position as well and now the next generation is coming with Trent and Robbo.

“Ali is a very calm asset as well to all of this and Mo is, obviously, a natural leader. We have a top group. Thank god Hendo doesn’t have to do it alone, but he is the captain of this team…and he fills the role in a perfect way.”