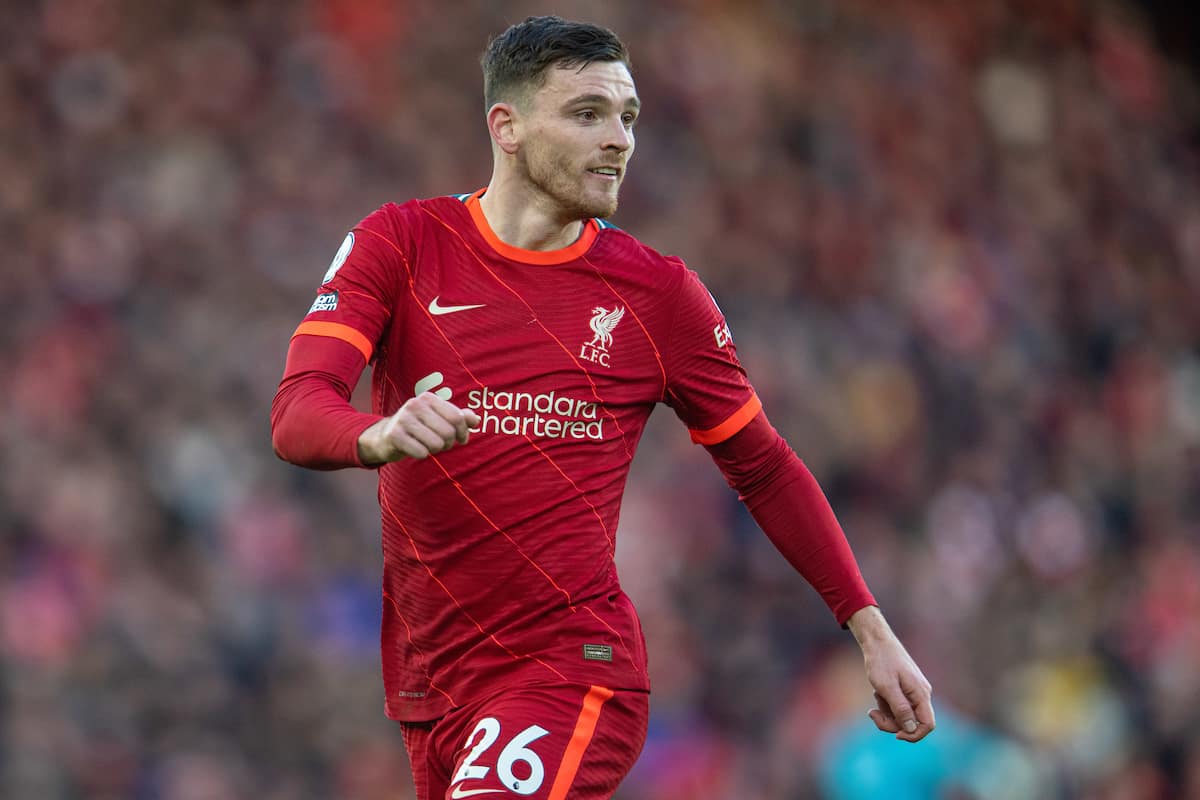 While Diogo Jota scored a double and Thiago added another brilliant goal, it was Andy Robertson whose performance deserves the most credit after Liverpool’s win over Southampton…

One of the biggest dangers in following this Liverpool of ours is the concept of failing to give credit where it is due.

There are so many beautiful distractions that brilliance can go unacknowledged sometimes.

For instance, I can remember writing an article one time, loosely covering a game in which Mohamed Salah had torn the opposing defence asunder, scoring multiple goals, making multiple assists, and not even making mention of him.

You see, there had been this plastic bag that was caught within an almost perpetual updraft, constantly swirling around the Anfield air.

It had been quite hypnotic, and I dedicated approximately 1,000 words in its honour.

Magnificence can evoke awe, but it can also breed the contempt of assumption. We can all be guilty of taking something that is perfect for granted, and occasionally forget to give it the praise it deserves. 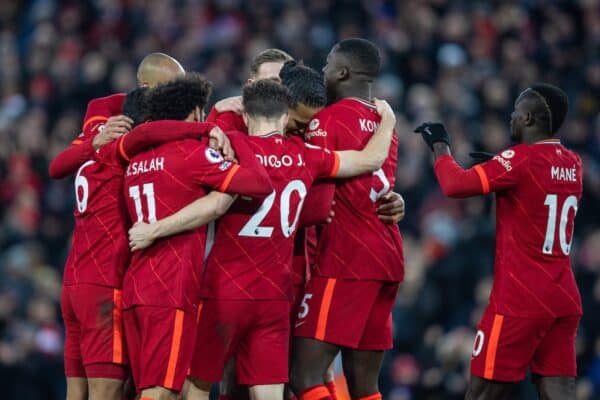 Within the blizzard of attacking football Jurgen Klopp’s team are currently producing, the work of Liverpool’s defence can easily fall under the radar.

On Saturday, against a Southampton side who were entirely complicit in its own downfall, Diogo Jota and Thiago quite rightly absorbed much light and hoovered up vast quantities of the applause, while Sadio Mane put in a performance that suggests he’s completely and utterly back to his best.

Mo, while seeing his goalscoring run come to an end, put in another fine shift too, and added to this, Jordan Henderson and Fabinho were imperious in their orbiting of Thiago.

As mad as it sounds on a day when Liverpool scored four without reply, it was their defence that impressed me the most. Southampton had their chances in this one, yet Alisson and his defence were equal to them all.

There is a wonderful choreographed nature to Liverpool’s defence.

It would often be said of the Liverpool that I grew up on, the one that was the product of Bob Paisley, that their attack was the first line of their defence. 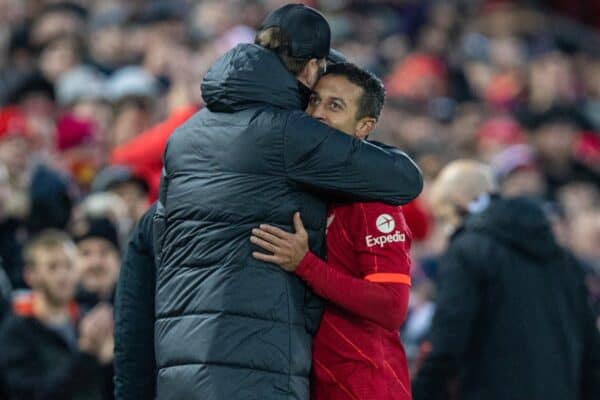 This is a mantra that still exists today, in the form of the pressing game that Klopp has tattooed to the DNA of the club, but it comes with a gravity-defying footballing balance, in which he has made Liverpool’s defence the first line of our attack.

I mean, admittedly, the concept of this, at Anfield, isn’t entirely unique, as Liverpool have leant towards attacking full-backs since the 1960s and ball-playing central defenders since at the very least 1973.

Yet, in the past, it has usually meant one of the two full-backs being attack-minded and the other one being more circumspect.

It has usually meant one central defender is a frustrated midfield playmaker and the other suffers nosebleeds in the opposing half of the pitch, apart from maybe the occasional foray forward for a corner or a set-piece.

Sami Hyypia and Daniel Agger loved an attacking mission, while Jamie Carragher mockingly refers to himself as being a former Liverpool ‘yard dog’ for instance, and Martin Skrtel could never be described as a ball-playing central defender. 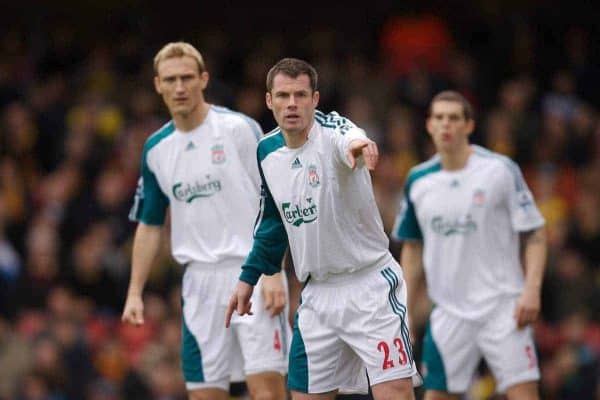 Going back to the yardsticks of Shankly and Paisley, and onward through Joe Fagan and Kenny Dalglish, we would always have that roving central defender, be it Emlyn Hughes or Alan Hansen, sat alongside a partner who would be comfortable on the ball but also handed the duty to generally stay put, be it Phil Thompson, Mark Lawrenson or Gary Gillespie.

Once Paisley introduced the idea of wide midfielders who tucked in, as opposed to out-and-out wingers, this gave his full-backs increased licence to go forward, yet it was never in unison. One would go, the other would stay.

Klopp has taken these blueprints and put his own spin on them. There is a stunning fluidity to the contemporary version of Liverpool’s defence.

Detractors will say that attacking full-backs aren’t a new invention, and they are correct, but what they miss is the panoramic picture.

Trent Alexander-Arnold, and Andy Robertson linking as a partnership is truly groundbreaking, as is both central defenders being given carte blanche to advance forward.

They all operate within an air of Totaalvoetbal. We could perhaps term it as Totaaldefending.

The Liverpool defence makes the most beautiful patterns. If you watch Liverpool in person, pick a random game and dedicate your viewing to them one day.

A back four in name, they rarely are such a thing in the reality of a game in motion.

Alexander-Arnold often occupies an unofficial midfield role, so often running parallel to Henderson, from where he counterpunches, while Robertson balances this by either keeping to the defensive line or placing himself higher than Alexander-Arnold, in the final third.

It is complex yet simple, and it is devastatingly effective.

Whenever Alexander-Arnold vacates the right-back position, the right-sided central defender – Ibrahima Konate on this occasion – covers him and Fabinho drops back to play as a protrusive centre-back, positioned around 10 yards ahead of Virgil van Dijk. 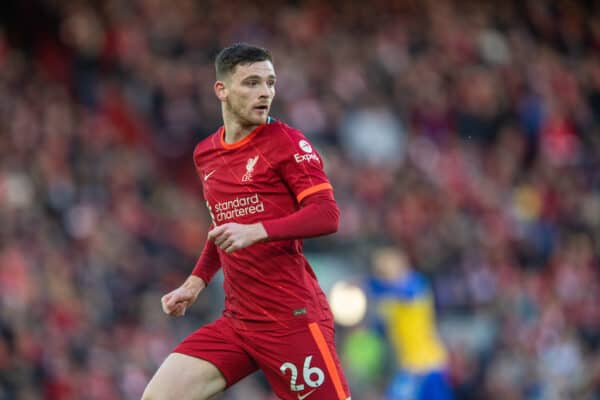 Whenever Robertson is off down the left, causing havoc with Mane within a faithful reenactment of the peak-1987 John Barnes and Steve Nicol, then Van Dijk drifts left and Fabinho pairs with Konate – or Joel Matip as the case may well be this coming Wednesday.

Whenever both Alexander-Arnold and Robertson are on manoeuvres, then we morph into a three-man central defence, and an extra midfielder drops into Fabinho’s position. On Saturday, Thiago would sit in when required.

It is a simplicity which means each defender and each midfielder goes onto the pitch with just two or three fluid roles to cover, reacting to the ever-altering pattern of the game.

It is a wondrous thing, which is entirely based within simplicity and flexibility. At times, it is like Subbuteo players come to life, and it is the freedom everyone is given which makes this Liverpool what it is. 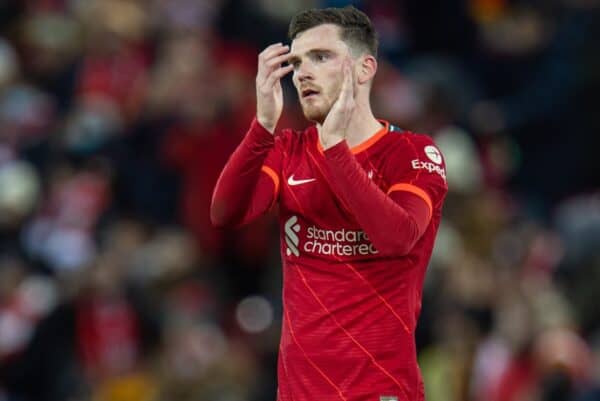 Van Dijk might have got himself a goal against his former employers on Saturday, but it was Robertson who stole the nominally defensive show.

He was everywhere, and everything. The speed of movement, the presence of mind, the composure in restricted space, his constant availability. He must be an utter nightmare to play against.

The best image on Saturday, for me, was Robertson’s reaction to the opening goal.

Now to take this magical ethos to Goodison Park, for what will likely be a disorientating and uneasy reunion with Rafa.