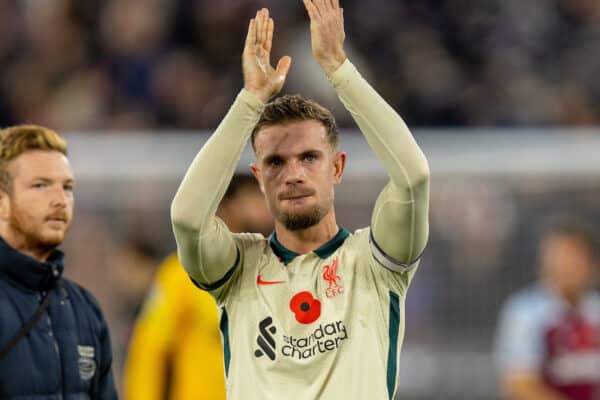 Liverpool must turn shock into wakeup call after sleepwalking into Moyesball

On a 25-game unbeaten run heading into their clash with West Ham, Liverpool were guilty of sleepwalking their way to defeat, masterminded by a long-time rival.

Sometimes you must put your hands up and accept you were on the receiving end of well-organised and determined opponents, no matter who the mastermind of your downfall is.

Sunday’s defeat is hard to take because all Liverpool’s losses are generally unpalatable, but the end of long, unbeaten runs have a distinct sting of their own.

You become wholly unaccustomed to the sensations of being vanquished, and you fall into a pattern of taking positive outcomes for granted. There is a void when, one day, that positive outcome does not arrive.

This is what the 1980s were like. Defeats were infrequent, but within that, when they did occur they left an impact print that would last for days.

Throw an international break into the mix, and it is even more painful, as it leaves you with a fortnight to stew on it.

These defeats become a psychological game of hindsight vs. foresight.

Many will want to settle upon a reason for the loss, maybe even feel the need to identify a scapegoat, in a bid to find solace and ‘closure’.

Others will opt for burying it as a bad day at the office, trotting out the ‘we go again’ mantra. Essentially, we’re all ‘top Reds’ either side of these personality-driven dividing lines.

West Ham are a team that is currently riding the crest of a wave, just as Brentford and Brighton were when we faced them, just as Arsenal will be when we next set foot upon a rectangular green patch of land to kick a football around.

These are a series of unfortunate situations.

On foresight’s behalf, Jurgen Klopp saw the signs of this result coming for a few weeks, citing his unhappiness at the body language of some players. Long winning runs tend to end when the team in question begins to sleepwalk their way to results.

Carelessness creeps in. For reference of this, cast your eye back to us throwing leads away far too cheaply against Brentford, Man City and Brighton in the Premier League, while in the Champions League we did likewise away to Atletico Madrid, before correcting the situation.

Correcting situations is a vital task for a team with high aspirations. This is something we need to be working on, as we are falling short in this department.

It isn’t an overnight epiphany either. Going back to the draw with Chelsea, we failed to take advantage of an extra man.

Football will be football, and the unexpected will always lurk in the shadows. The trick for Liverpool is how to respond.

A concept turned on its head, opposing teams fully expect us to come at them, often in a high-velocity frame of mind. Whether they prosper or not depends upon how they deal with these tales of the expected.

West Ham were more positive in their approach to being pegged back to 1-1 than they were when leading 1-0. This was mirrored by Brighton, whose best was on display after a VAR call stopped Liverpool advancing into a 3-0 lead.

David Moyes is a peculiarity. He is akin to that old 1960s crooner who is randomly invited to play Glastonbury at teatime on Sunday, marking a return from being cast aside by his record company in the late 1980s to become a self-styled icon once again, if in somewhat ironic or camp circumstances, reborn for a new generation to behold.

Upon a Premier League landscape that no longer offers employment to the likes of Roy Hodgson and Sam Allardyce, Moyes has become the flagbearer for British pragmatism, and some Man United fans are even beginning to look at him with misty-eyed regrets.

Which is, of course, utterly bonkers, and speaks highly of the punch-drunk nature of the current situation at Old Trafford.

Moyes is in a safe place at West Ham, finding his perfect level at a club that once showed him the door because they thought they could do better for themselves.

What is good for him and the club he manages is that you can’t take pragmatism to any of the ‘big six’ clubs, as their mindset is above such a ‘trivial’ brand of football.

At least two big six clubs a season underachieve, however, where they are dragged back into a pack of clubs that are capable of making pragmatism work. Moyes is now the godfather of pragmatism, and thus is now the holder of one of the most influential roles in English football.

Moyes will play the percentages and land the occasional blow on his ‘superiors’. This put us in the wrong place at the wrong time on Sunday.

Sunday doesn’t make us a bad team, with seismic underlying problems, although it would be nice to stop shipping so many goals.

Yet we’ve been here before, Klopp trying to tinker with the balance between defence and attack, something he must do, in order for what is currently a club that is not in the buyers’ market to evolve.

We have come back to the race with roughly the same set of players, but a different song to sing, and sometimes it won’t go as well as planned, because the plan we go up against works better on the day.

Prior to the game, Moyes was glowing in his respect for Klopp and Liverpool, stating that he and his team had the capabilities to take them down on their day, if the wind blew in the right direction for them, but not across the expanse of an entire campaign.

Moyes has ambitions, but he keeps them on a leash.

In black-and-white terms, on Sunday, we could point to Alisson’s aberrations, to a defensive weakness at set-pieces and a collective shortcoming in midfield as prime reasons for defeat, on the self-inflicted side of things, yet we must also acknowledge that West Ham nailed their gameplan.

It is uncomfortable to admit we were outwitted by Moyesball, yet that is what happened.

West Ham were strong defensively, disciplined in midfield, not ashamed to densely pack their first third whenever they felt it necessary, yet were far from shy in hitting on the break.

This was a leaf taken from the gospel of Brian Clough, with a touch of Martin O’Neill’s Aston Villa for good measure.

At 1-0 up, West Ham retreated into their shell, yet landed the next punch when the score was at 1-1 and looked certain to score next after going 2-1 up, which they indeed did.

Even at 3-2, Sadio Mane’s chance at the end apart, we didn’t apply anywhere enough pressure, and that was as much down to Moyes’ side as it was our own procrastination.

That Arsenal game next it is then. Another team in form, but one with a manager that will be unlikely to deploy a system that uses Moyesball as a template, which could just as easily play into our hands as overrun us.

We’re both the team that won 5-0 at Old Trafford and the one that lost to Moyesball. I’m backing us for a mad 4-3.