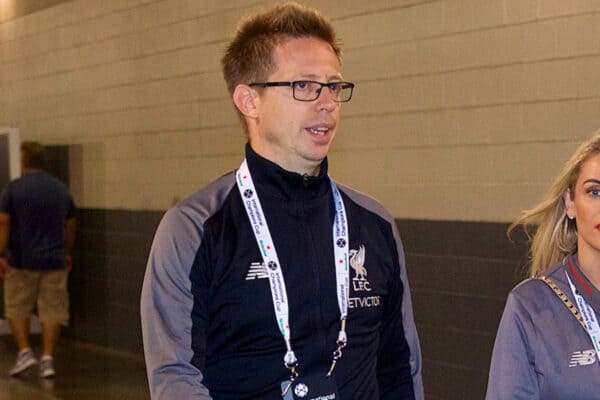 Michael Edwards is in the final year of his contract as Liverpool’s sporting director, and amid speculation he could leave next summer, RB Leipzig are reportedly interested.

Typically, speculation in football focuses on players and managers, but when it comes to the Reds, Edwards’ position is an important one.

In his role as sporting director, he has revolutionised the club’s approach to recruitment, with signings, sales and contracts boasting a high success rate.

Back in August, The Athletic‘s David Ornstein reported that Edwards is “expected to step down” at the end of the current campaign, having “informed the Liverpool hierarchy of his intention to move on.”

Journalists on Merseyside corroborated this information, though the popular line is that he could still commit his future to Anfield beyond 2022.

A report in German publication SportBILD this week, however, claims RB Leipzig are making advances to bring Edwards in as their new sporting director.

Sport Witness have relayed the news, with Edwards described as Leipzig’s “hot candidate,” and talks over a possible new job “became more concrete” last month – with it “even expected” he could join as early as January.

Oliver Mintzlaff, global head of soccer with the Red Bull GmbH that owns Leipzig, is said to be the driving force, having struck up a relationship with Edwards during the deal to sign Naby Keita.

It would make sense that Leipzig would be interested in bringing in a man of Edwards’ expertise, though whether he would take up a sporting director job elsewhere remains to be seen.

Liverpool are in a relatively strong position regardless, having promoted Julian Ward to assistant sporting director last year, and it could be that plans are already in place for him to step up into the lead role.

Responding to SportBILD‘s claims, journalist Dominic King tweeted that it is “clear why they – and many, many other clubs around Europe – would want him.”

However, King has stressed that it is “still not beyond the realms of possibility he signs a new contract to stay at Anfield.”

There has been a steady trend of internal change within the structure in place at Liverpool under Fenway Sports Group, with the role of chief executive moving from Ian Ayre to Peter Moore to current incumbent Billy Hogan.

But on a day-to-day basis, the future of the Reds’ sporting director could be a more troublesome issue – one that is hopefully resolved, one way or another, soon.