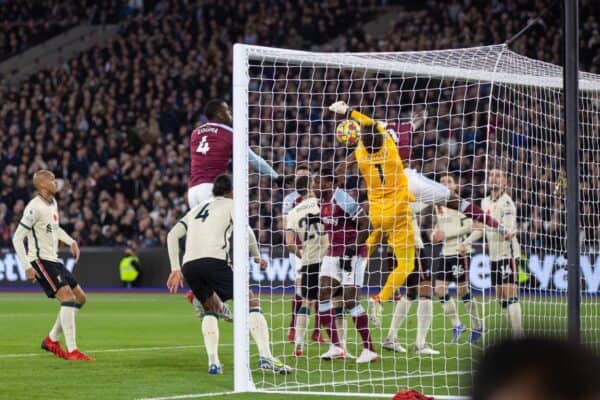 From just three corners West Ham scored two goals against Liverpool as their plan paid dividends, with Alisson outnumbered and out positioned at the most crucial of moments.

The Reds did not cover themselves in glory at the London Stadium, with the tone of the evening set in just the fourth minute as the Hammers were able to play to their strengths.

Liverpool will have known of their set-piece prowess heading into the clash and while their chances were limited, the ones they did have were not dealt with as two goals and a hit to the crossbar followed.

While Jurgen Klopp was rather aggrieved that the first good was able to stand, Michail Antonio was rubbing his hands in delight post-match as his man-marking of Alisson paid off.

“Yeah, the whole plan was to stick it on the goalkeeper and just challenge basically,” Antonio explained to Sky Sports.

“We saw that they’ve struggled with the ball coming in and all we have to do is keep the ball away from Virgil and it worked out for us today.

“We have to give it to the staff. They have a look at the weaknesses and strengths of what each team come up against and for different games, we cover different strategies.

“Majority of the time it’s between gaffer, Paul Neville and Kevin Nolan – they control it and have a look at all these teams and we find the positions we want to hit.

“So today was definitely push straight on the ‘keeper and we go and challenge.

“I saw that no one marks me on the ‘keeper so I’m there to block the ‘keeper to make sure he can’t come out and catch it. We saw what happened today, goals.”

It was a game plan that Trent Alexander-Arnold conceded Liverpool played straight into, with Klopp’s men their own worst enemy on the day.

“We played into their hands a lot, especially in the second half, and got sucked into their game,” the right-back told the club’s official website.

“We allowed them set-pieces, counter-attacks – that’s exactly what they want to do, so we never did what we needed to do to win the game here today.”

The result and the performance shines a light on the improvements Liverpool need to make and as Klopp has said previously, “It is not a problem to lose a game, it is football, it happens all the time but we have to learn the right things.”