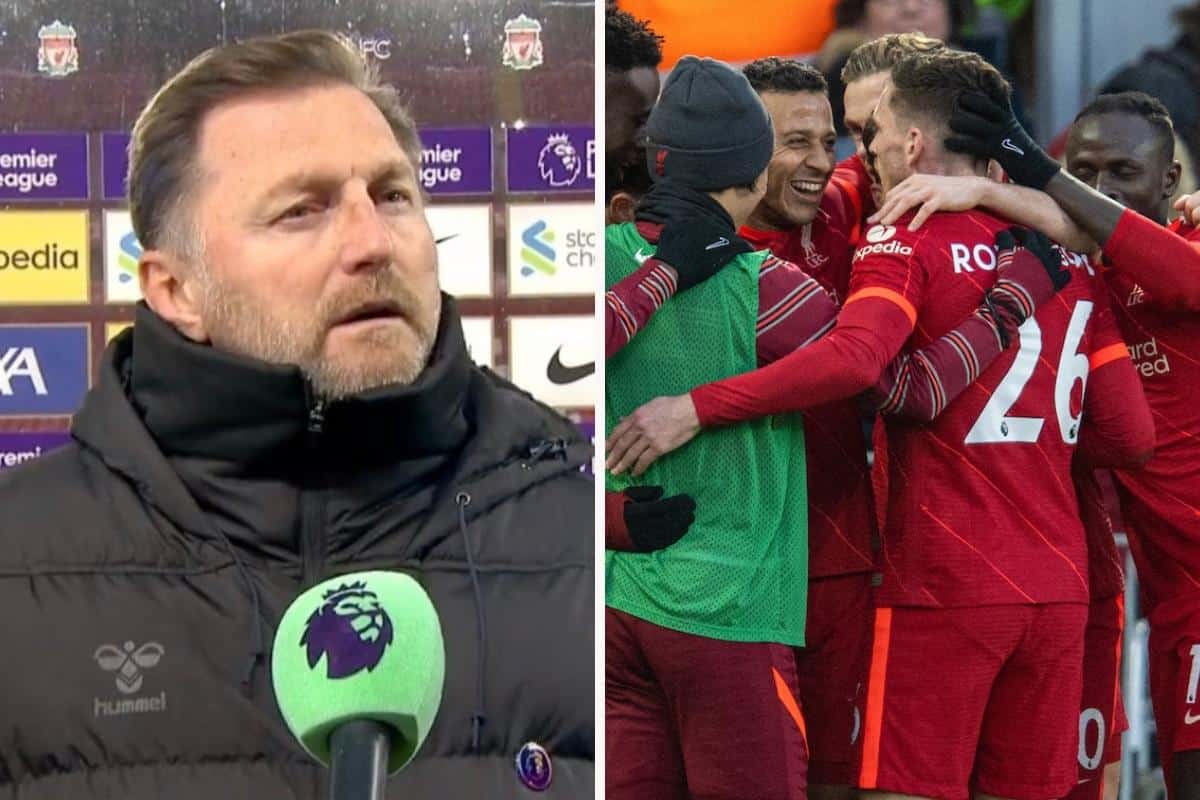 Southampton manager Ralph Hasenhuttl admitted his mistake in changing system against an “on fire” Liverpool side, as his team slumped to a 4-0 defeat at Anfield.

It rarely goes well for a side who arrives to take on Liverpool with a back five, but that is the formation Hasenhuttle opted for on Saturday.

The Austrian shifted from his favoured 4-4-2 system to a 3-4-3, with Jan Bednarek, Lyanco and Mohammed Salisu starting as centre-backs and Tino Livramento and Romain Perraud shifting to wing-back.

Southampton‘s switch caused them problems from the off, with Diogo Jota netting in the second minute, before the striker doubled his tally and Thiago made it 3-0 before half-time.

“We played against a team on fire at the moment and made a mistake which you shouldn’t do against such a team,” Hasenhuttl told beIN SPORTS after the game.

?? "We played against a team on fire at the moment… We had our chances also but there was not the quality to make the goal."

“Changing the shape that you normally know very well and then trying against this team from the beginning didn’t work.

“During the week we had some thoughts, then Ibra [Diallo] was then today suddenly out, couldn’t play because he was injured, so the whole preparation for the game was not perfect.

“It was not the right choice, I think, finally, but after the game you always know more.

“Even then, I think if we played our normal shape we would have had a hard afternoon against a good side.”

Hasenhuttl reverted to his usual setup after the break, but as he explained, Liverpool had far too much quality to allow it to make a difference as Virgil van Dijk finished the scoring at 4-0.

Southampton had opportunities, with Alisson and Ibrahima Konate required to make a number of blocks while Van Dijk was imperious in mopping up, but they were far too wasteful.

“When you want to speak about the difference between these two teams, maybe you can speak about our finishing of our chances and what they do with their chances,” Hasenhuttl continued.

“It’s absolutely world class what you are facing there, and you have seen that we were really struggling to defend this quality up front.

“We sometimes had good moments, but couldn’t score.

“Against such a team it is tough to score, but we should start to do it a minimum of one or two times today.”

On Liverpool, Chelsea and Man City he added: “We must say these three teams in the moment are absolutely in their own class in the league.

“But when you want to have a chance, you have to have a perfect game. We had everything but that.”