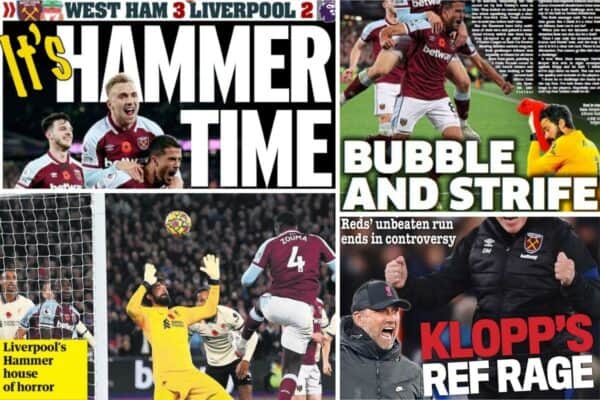 The media bemoaned Liverpool’s shoddy defending in the disappointing 3-2 defeat away to West Ham on Sunday afternoon.

Jurgen Klopp‘s side were given a tricky assignment in their final match before yet another international break, coming up against a strong Hammers outfit.

Liverpool had a nightmare at the office, going behind early after Alisson‘s own goal, before an awful second-half showing.

Here’s a look at how the media reacted to Liverpool’s loss.

A hugely disappointing defeat was focused on…

Goal‘s Neil Jones did not enjoy what he saw:

“Liverpool’s long unbeaten run is over. Had they avoided defeat at the London Stadium, they would have set a new club record of 26 games without a loss in all competitions, ensuring their place in history in the process.

“It proved a bridge too far, Klopp’s team crumbling in the face of a solid second-half assault from Moyes’ men, who move above Liverpool in the Premier League table as a result.

“They may complain about the manner of West Ham’s opening goal, which had a suspicion of handball and/or a foul about it, and the fact that Aaron Cresswell was lucky to avoid a red card for a wild early challenge on Henderson, but they can have no complaints about the result. The Reds got what they deserved.

“For once, the international break may be welcomed at Anfield. A chance to refresh and recharge, to ease a few more players back to fitness and to take stock of a hectic few weeks.”

“There will be no Invincibles this season, but perhaps an unlikely imposter in the Premier League title race.

“With the Czech billionaire Daniel Kretinsky watching on ahead of buying a 27 per cent stake, West Ham United did not just end Liverpool’s 25-game unbeaten run, but leap-frogged the 2020 champions with a thrilling 3-2 win to further underline their top-four credentials.

“Liverpool might have been aggrieved by the manner of West Ham’s opening goal but, even despite dominating possession, could have little complaint about the wider outcome.

“West Ham were resolute in defence, magnificent in their relentless midfield pressing and, headed by Michail Antonio, often deadly with their rapid counter-attacks.”

Sachin Nakrani of the Guardian was not impressed with the Reds’ back-line:

“For Liverpool this was a first defeat in 26 games and a chastening one at that, given the slackness they yet again showed from a defensive point of view, no one more so than Alisson.

“The Brazil goalkeeper, normally such a reliable presence, was at fault for all three goals, yet there were poor displays throughout the visitors’ ranks and for Jurgen Klopp there is much to ponder as he enters what for him will feel like an incredibly frustrating international break.”

This Is Anfield‘s James Nalton felt Alisson struggled badly, but he wasn’t alone there:

“The entire defence didn’t cover themselves in glory, and only Virgil van Dijk can emerge with any credit, but Alisson could have done better for the second goal as he was only able to get a weak hand on Fornals’ shot.

“It wasn’t the best afternoon for the Brazilian, but it’s very rare a goalkeeper will go an entire season without a game like this.

“Unfortunately for Alisson, many of those in front of him were just as bad.”

BBC Sport‘s Gary Rose was another who was critical:

“Defensively they were disappointing. While there were question marks over how much Alisson was impeded for the opener the Brazil goalkeeper should really have done better with West Ham‘s second, but he allowed Fornals’ shot to creep past him.

“That prompted a period in which West Ham broke their lines on a number of occasions as Liverpool struggled to cope with the hosts’ excellent counter-attacking.

It was a disappointing result for the Reds, but they will at least accept they were beaten by genuine rivals for the top four.”

The title race was also assessed, with some level heads…

Jones believes Liverpool are still challengers, but injuries are an issue:

“One result should not shake their confidence or belief. They are very much in the title race, and very much in the Champions League picture too, but Klopp will know there is a lot of improvement to come from his side, who have now dropped five points in the space of eight days to fall adrift of leaders Chelsea.

“Injuries are not helping, with Naby Keita, Curtis Jones, James Milner and Harvey Elliott all absent here, and Thiago Alcantara fit enough only for a 20-minute cameo.

“But if we should have a degree of sympathy in that regard, the decision not to sign a direct replacement for the indestructible Gini Wijnaldum looks worse with each passing week.”

The Mirror‘s Mark Jones was less optimistic, though:

“And so the unbeaten run is over, but what about the impact on the title race?

“Liverpool had seen Burnley do them a favour on Saturday when they took points off Chelsea, but now they have slipped to fourth behind the victors here.

“Coming hot on the heels of the home draw with Brighton, Klopp is sure to be concerned about a Reds side that just looks as though it could do with a reset right now.”

The Independent‘s Karl Matchett believes a top-four battle could even be on the cards:

“At kickoff this was fourth against third, leaving West Ham able to leapfrog Liverpool with a win – or the Reds to move back to within a point of the top if they claimed victory themselves.

“Of course, by full time it’s the latter – leaving Jurgen Klopp’s side facing the fact of having lost only once in all competitions this season, yet it being only good enough for fourth place in the Premier League table.

“It speaks volumes of the challenge of winning the title, but perhaps more about the value of winning – the Reds have drawn four from 11, which is a costly return already.

“West Ham, meanwhile, will doubtless try to keep a lid on the excitement but they earned European football last season and will justifiably think, if only to themselves, that they can really go the distance and keep a top-four push on this term, given how far away from their own level of consistency the likes of Arsenal and Manchester United are.”

Finally, Nalton saw it as a big missed opportunity:

“This result plus the recent draw with Brighton were missed opportunities for the Reds to really make a statement at the top of the table.

“Man City‘s recent loss to Crystal Palace and Chelsea‘s draw with Burnley show that none of the title challengers are without their weaknesses.

“But Liverpool have failed to capitalise on dropped points by their rivals on both occasions, and are now even behind their most recent opponents in the table.

“They could be top of the table by a point going into the international break but are instead four points off Chelsea. At least City and Chelsea look beatable, too.”