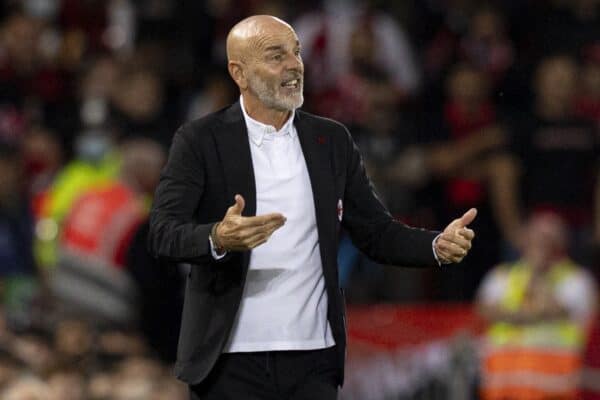 AC Milan will be at bare bones in attack as they host Liverpool in the Champions League on Tuesday, with their 2-0 win over Salernitana bringing two new injuries.

Milan ended the weekend top of Serie A after a convincing victory at the San Siro, with Franck Kessie and Alexis Saelemaekers getting the goals in the first 18 minutes.

But their win came at a cost, which could be a blow to Stefano Pioli’s hopes of reaching the Champions League last 16 with a win over Liverpool.

The second spot in Group B is still up for grabs, with Milan, Porto and Atletico Madrid all in with a chance of advancing alongside the Reds, who are already guaranteed top.

And while Liverpool’s injury situation is improving heading into the festive run, with Joe Gomez and Naby Keita both back and Roberto Firmino not far off, Milan have two new problems to consider.

Centre-back Simon Kjaer underwent ACL surgery on Friday, which should rule him out for the remainder of the campaign, and now forwards Rafael Leao and Pietro Pellegri are sidelined for Tuesday’s game.

Football Italia relay that the forwards have both suffered thigh injuries, while Theo Hernandez is also a doubt due to illness.

Ante Rebic, Olivier Giroud and Samu Castillejo are already out, which leaves Pioli short of options in attack for the 8pm kickoff.

Zlatan Ibrahimovic was rested at the weekend and is almost certain to start up front, with Brahim Diaz – who scored in the reverse fixture at Anfield – a shoo-in for the No. 10 role.

Saelemaekers will keep his place on the wing, while 30-year-old Junior Messias, on loan from Crotone, is the most likely candidate to complete a four-man attack.

Beyond that, Milan’s only other established senior option is Daniel Maldini, the 20-year-old son of club legend Paolo Maldini, with the squad likely to be fleshed out with youngsters.

Pioli will also be without right-back Davide Calabria, and if Hernandez is unavailable his defence could be far removed from his first-choice quartet.

Given the prize at stake for Milan if they take all three points on Tuesday, they are required to go all out for victory – potentially without the personnel needed to do so.