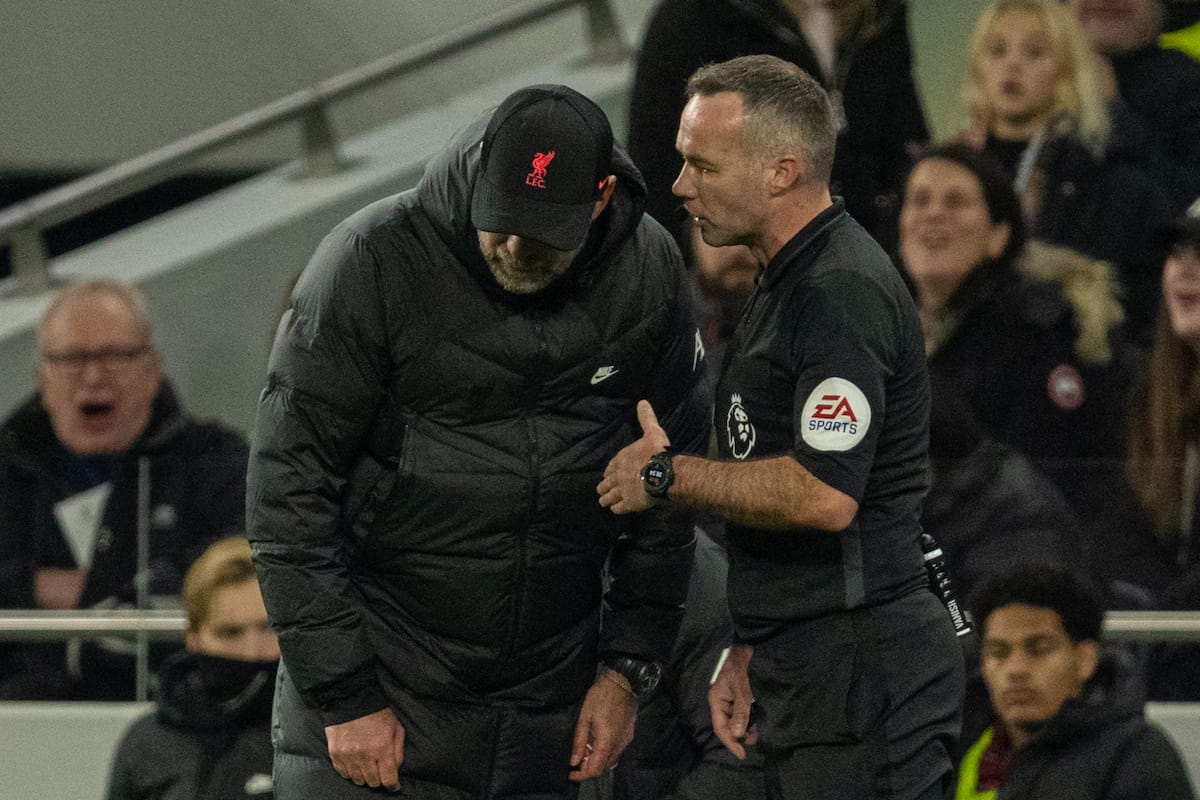 The officiating during Liverpool’s draw at Tottenham has come under a lot of scrutiny and that Paul Tierney is to oversee VAR for the trip to Chelsea has fans concerned.

After a handful of major incidents were overlooked or wrongly judged on Sunday, ex-professionals and former referees alike joined fans in questioning the consistency of the decisions.

A red card for Andy Robertson but not Harry Kane, and the lack of VAR intervention on the latter, and a clear penalty shout for a foul on Diogo Jota in the box waved away.

It left Jurgen Klopp to say of Tierney, “you will have to ask him what his problem is with me.”

And after it came to light that Tierney is to oversee VAR for Liverpool’s crucial trip to Chelsea on January 2, with Anthony Taylor on the whistle, Reds have a foreboding feeling:

Looks who's on VAR ? pic.twitter.com/wX8EpBS4Oj

No way, Paul Tierney is VAR referee in our upcoming match vs Chelsea. I can't believe this.

Paul Tierney is the VAR at our game against Chelsea pic.twitter.com/lW5v94f2Dz

Tierney on VAR vs Chelsea, robbo back for Chelsea (if nothing extraordinary happens): I think I know a safe bet

Tierney on VAR for the Chelsea game and Taylor reffing. Won’t get any decisions in that game https://t.co/wUqyINEc64

Still can't believe it 2 days later. Paul Tierney gets to crack on with no repercussions despite having a bigger impact on the title race than Ronaldo. Worse still, he's our VAR official for the LFC Chelsea game next week. Horrific. https://t.co/saa2bJJtdb

Paul Tierney on VAR for the Chelsea game? pic.twitter.com/bugiRi8loU

The appointments for the Stamford Bridge clash were confirmed on December 13, before the Spurs debacle, but Tierney having a role will fill few with confidence from what they’ve seen so far.

Club statistician, Ged Rea, revealed Tierney has been responsible for 42 percent of Liverpool’s bookings in the league this season despite having only taken control of three games.

It’s not a case of looking to find an agenda, more that the refereeing group are above admitting to mistakes or rectifying them by presenting a defence that changes the rules from one game to the next. 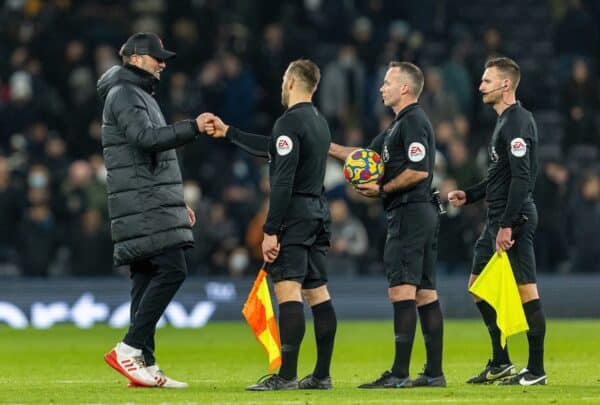 That no red card for Kane was justified due to Robertson jumping out of danger is baffling as if he didn’t, a broken leg was most certainly on the cards.

It’s not a topic you want to discuss after games such as these and it will be the same against Chelsea, but Premier League referees continue to give fans plenty of reasons to.