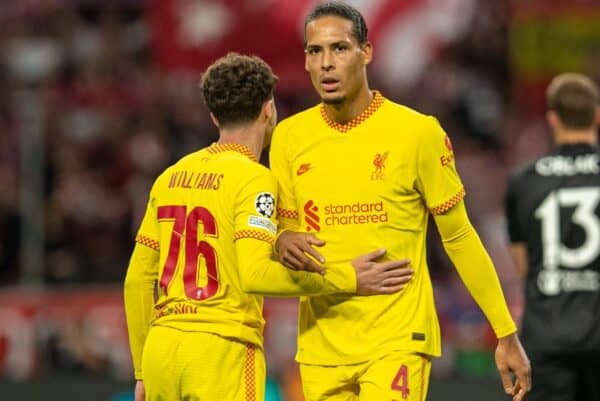 Liverpool’s Champions League group finale takes them to Italy but with their fate already sealed, Jurgen Klopp has the chance to make wholesale changes.

The Reds’ place in the last 16 has been safe since the fourth game of the group stage, with their 100 percent record to date putting an emphatic stamp on their progression.

Finishing off the first stage of the competition without a blemish would see the Reds write their name in the history books once more, but it’ll be up to a rotated side to get the job done.

In the space of a week, Liverpool played three games and Klopp made just one change and with the festive run to be taken up a notch, now is the time to ease the load on his key pillars.

Here’s how the Reds could lineup at San Siro.

The manager has predominantly stuck with his strongest possible XI in the last three games, but heavy rotation is guaranteed this time out.

With a mostly healthy squad to pick from, the team will still be far from weakened but could need time to gel together on the night.

The backline could be the subject of heavy rotation with Alisson behind a back four of Neco Williams, Ibrahima Konate, Joel Matip and Kostas Tsimikas – with Matip allowing for Virgil van Dijk to rest up.

With Henderson, Thiago and Keita unlikely starters, it leaves Fabinho, Tyler Morton and Alex Oxlade-Chamberlain as the likeliest three-man unit in midfield.

Mohamed Salah will be desperate for more goals and with Origi all but confirmed to have a place, they could be joined by Takumi Minamino:

With Gomez not yet to be rotated into the XI, it could instead be a case of retaining Van Dijk and swapping Matip for Konate in yet another centre-back rotation.

It would keep the Dutchman and Alisson in place with Williams and Tsimikas handed valuable minutes alongside the young Frenchman.

Should Henderson, Thiago and Keita not come into contention it leaves a straightforward choice in midfield as abovementioned, with Fabinho as the No. 6 next to Morton and Oxlade-Chamberlain.

And Sadio Mane could get the nod next to Origi and Minamino in place of Salah, despite the No. 11’s unquestionable desire to be involved at every opportunity:

Either way Klopp approaches his rotation, it’s one that will see Liverpool lineup with a side capable of winning.

And doing just that while affording members of his side a rest will be the cherry on top for an emphatic Champions League campaign thus far.