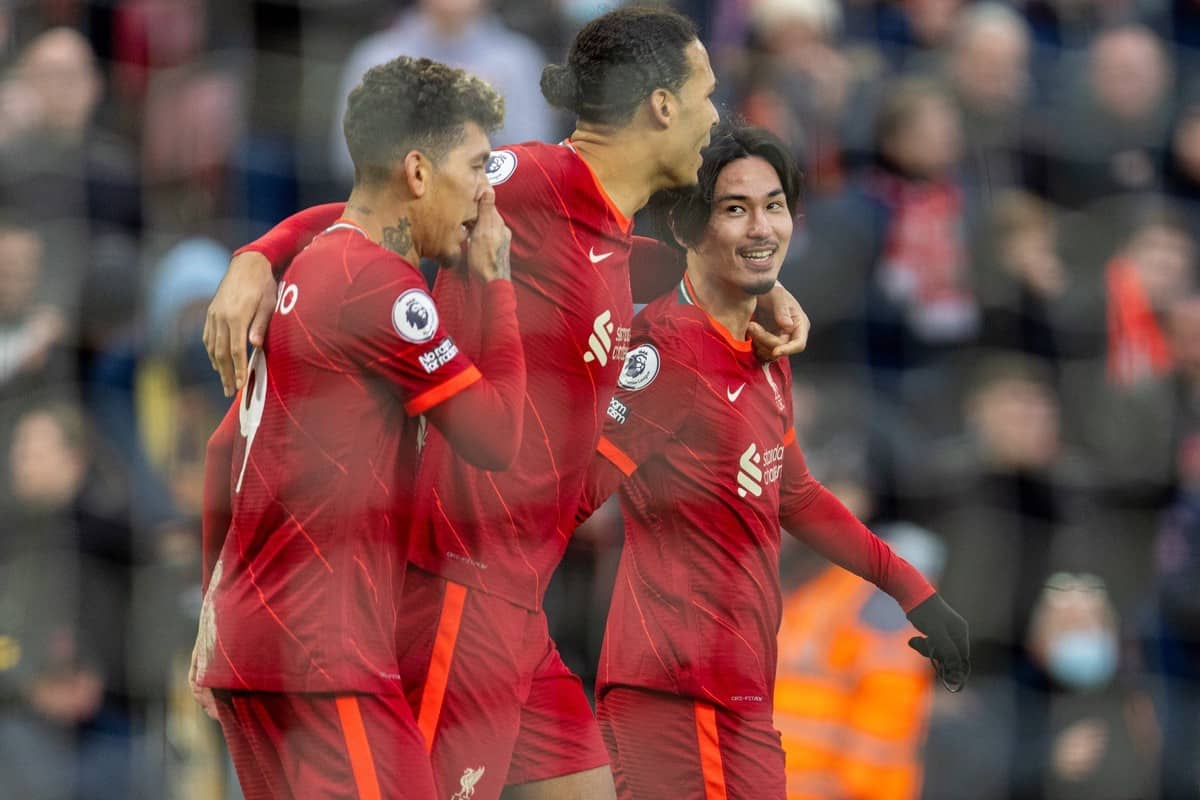 Liverpool returned to winning ways with a dominant, though not absolutely convincing in all respects, 3-0 victory over Brentford to go back up to second.

Some good aerial claims but his passing out was pretty wayward in the first half – not something we’re used to seeing from Ali.

Stood up well against two important chances, both fired off-target in the end after our No. 1 made himself big and looked to have them covered.

A bit of a mix in terms of deliveries, with some wild and wide crosses and set-pieces in amongst an assist from a corner and a couple of decent balls in searching out Diogo Jota in particular.

Had a couple of shooting chances himself, some better-taken than others, but at least this was a step back toward decent form after a recent absence.

Summed up a very hit-and-miss first half for the Reds when he gifted a clearance straight to Vitaly Janelt who shot wide, before embarking on a trademark dribbling run which almost ended in a great shooting chance.

A quietly efficient afternoon for the most part, making a few recovery runs and defensive clearances, but basically Brentford tried to attack the Reds’ right most of the time.

Almost scored the opener in the first half, his clipped strike cleared off the line.

The best way to describe this performance is a typical Andy Robbo one, but only at 70 percent of max capacity.

Less arguing and riling the opposition, fewer dangerous balls across and not as much last-ditch defensive recovery work needed – yet still did a little bit of everything.

An assist and a near-the-goalline block were his highlights. 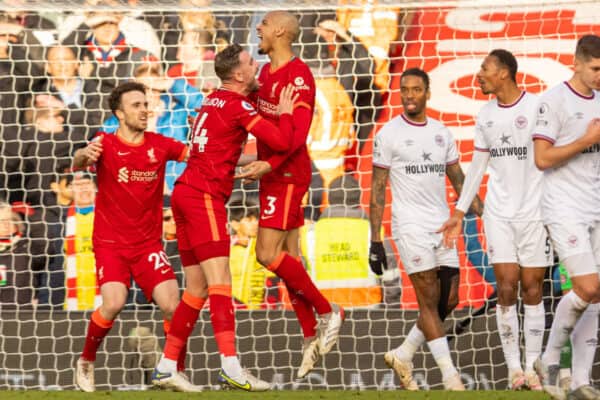 Who had Fab as our go-to goalscorer while the AFCON boys were away, then?!

A third goal in the last few games after nodding in just before the break and volleyed another effort on target just after the restart.

Defensively, of course, he was consistent and impressive in almost everything, other than one or two passes outside our own area. Such an important part of the team.

A very quiet first 45, plenty of overlapping runs and short passes aside. It wasn’t ‘good’, but it was definitely nowhere near the worst of his recent showings, either.

More of the same second half as he kept largely to recycling the ball, making overlapping runs and shut down any hopes of Burnley launching counter-attacks.

Not quite there as an attacking outlet, but like others, a step forward toward better things. 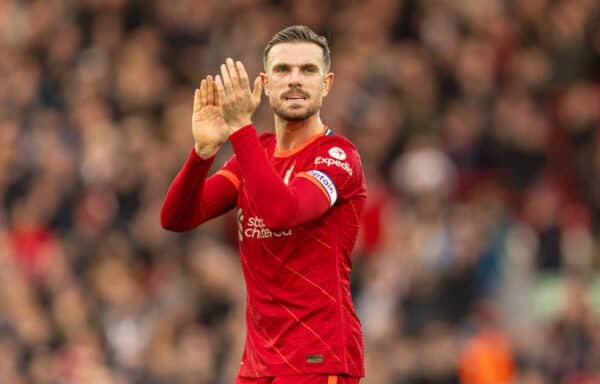 Did well on the ball and covered his side of midfield off it too.

Not electric and super-creative as he can be, but he’s another still getting back to top speed after a long time out of the team.

Overall one of the better players, starting in the middle before wandering left side and even popping up at centre-forward with some good rotational work before the end. 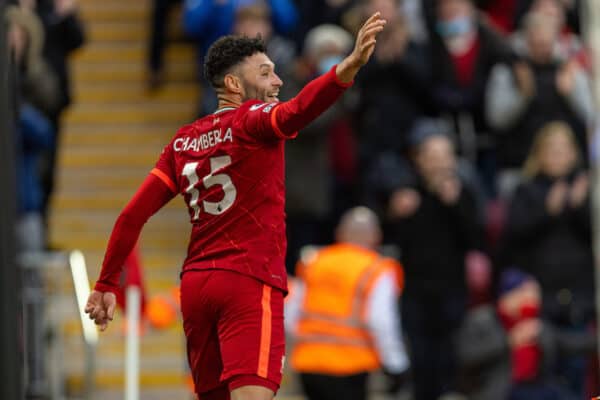 Back to the type of form where he needs a few games to have an impact, and hasn’t had them.

A few moments of magic and energy, notably bursting through for a first-half opening and some link play to create chances for others, but very inconsistent.

Wildly thrashed a half-volley into the top row of the Kop to sum up a lack of good decision-making – but then popped up with a typically aggressive and well-timed run into the box which did result in a key goal, sending a diving header in from close range.

Hopefully not a long-term layoff after an ankle injury minutes later.

Busy and almost really good, but slightly lacking in his finishing touch – hopefully these two showings will leave him nearer top gear for the second leg in the week.

Should have scored a one-on-one, smacked another effort against the post and could have played in a team-mate more than once, too.

A good, consistent showing from Bobby without too often producing a starring show.

Still rattled Brentford enough to steal the ball a number of times, the best of which was an eventual assist for our third, scored by Takumi Minamino.

Should have had another assist mind, but played a pass to Jota just a shade too short. 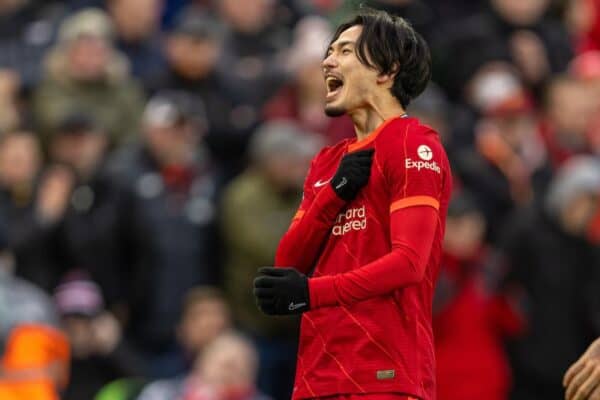 Takumi Minamino (on for Oxlade-Chamberlain, 74′) – 7 – Came on and scored himself a birthday goal with a tap-in. 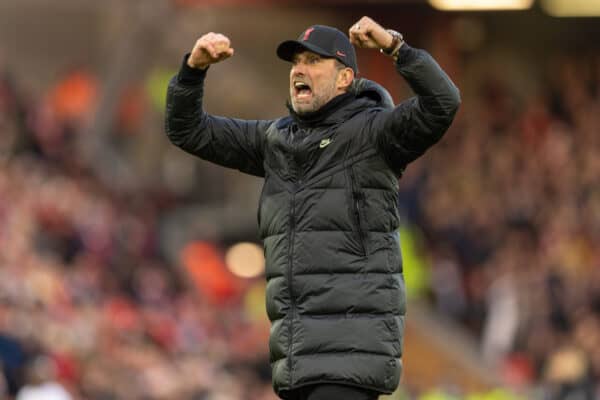 Can’t really argue with his team or sub selections. Made the changes which were definitely needed from the semi-final first leg, with Ox and Jones coming in.

Probably would have hoped for more of a first-half reaction from the team, but the goal right before the break definitely lowered the temperature of the half-time team talk.

Gave Kaide a runout after the result was wrapped up and hopefully gets a bit of confidence into the seniors ahead of the second leg on Thursday night.

Not much more we need from a standard league game: a win, a few goals, a clean sheet and a jump back up to second in the table.