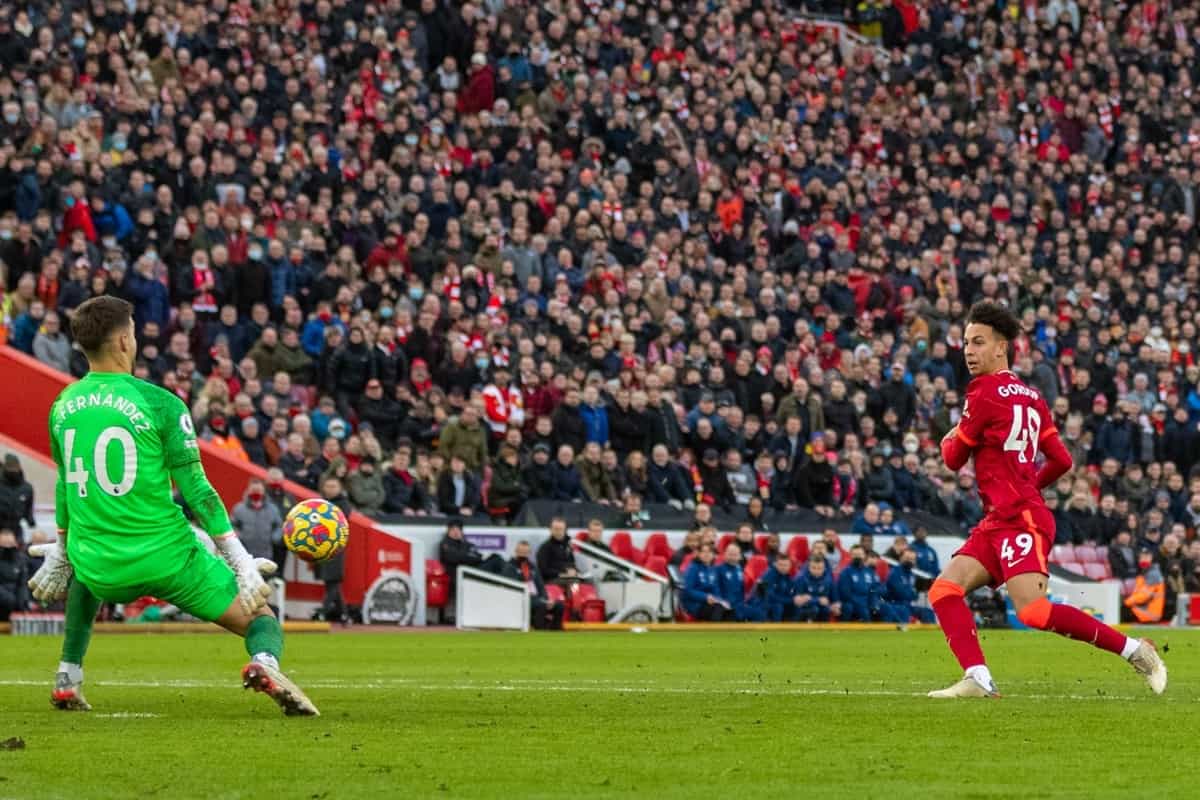 Kaide Gordon became the fourth-youngest league debutant in Liverpool’s history in Sunday’s 3-0 win over Brentford, and almost marked it perfectly with a goal.

The Reds had taken a three-goal lead through Fabinho, Alex Oxlade-Chamberlain and Takumi Minamino when Jurgen Klopp turned to his substitutes’ bench.

Included for the third time in the Premier League, Gordon was sent on for his league debut as he replaced Diogo Jota with 82 minutes on the clock, a week after scoring his first senior goal.

He leapfrogged Raheem Sterling as the fourth-youngest player to feature for Liverpool in the league, behind only Jack Robinson, Harvey Elliott and Ben Woodburn.

And he almost became the youngest player to net a league goal for the club, when brilliant work from Minamino saw him thread the 17-year-old through for a one-on-one with Alvaro Fernandez.

Unfortunately, Gordon’s effort was too close to the Brentford goalkeeper, with Liverpool fans taking to social media to rue his miss.

The overriding message was “if only”…

Imagine the let off if Kaide Gordon had scored that chance! pic.twitter.com/3c9v8ZpPBo

I can’t stop thinking about that Kaide Gordon chance, what a moment that almost was. Even I’m gutted.

Every time I’ve seen Gordon play he gets a one on one with the keeper, he might not put them away, but being intelligent enough to get into those positions, is a big thing already.

How good would it have been if Kaide Gordon had put away that chance at the end. Plenty of chances ahead of him anyway #LFC

Kaide Gordon on his Premier League debut got a 0.7xG shot off. The boy is going straight to the top.

If only Kaide Gordon had tucked that one away

A lovely little cameo performance from Kaide Gordon in last 1.0 mins of todays game, and he was really unlucky not to help himself to a 2nd Liverpool goal.

If Kaide Gordon scored that at the end I'd have lost the plot, big result that looked nowhere near likely after that first half

Others hailed the significance of Gordon’s debut, with big things to come…

Scary to think he was born just seven months before Istanbul ‘05. https://t.co/34KIGvlLnT

Kaide in what glimpses we have seen him kind of reminds me of Jota simply for the fact that his movement is really good, gets a lot of chances

Saw it in preseason, against Shrewsbury and now today almost scored on his debut

Kaide Gordon got this thing where he always makes and is in the position to take a chance, he could really be our next 20 + goal a season winger

Kaide Gordon is 100% making it, I have seen enough to come to a conclusion

Kaide Gordon’s making his Premier League debut at 17 years old, while I’m sat at home typing this at the age of 23.

It was a big moment for Gordon, making his Premier League bow, and in a post on Instagram after the game, the teenager described it as a “dream come true.”

There should be more opportunities in the coming months, with Klopp emphasising his faith in the £3.4 million signing from Derby, though he will remain patient when it comes to Gordon’s development.

His confidence is already high, and when that next goal comes, the reaction will be an emphatic one.