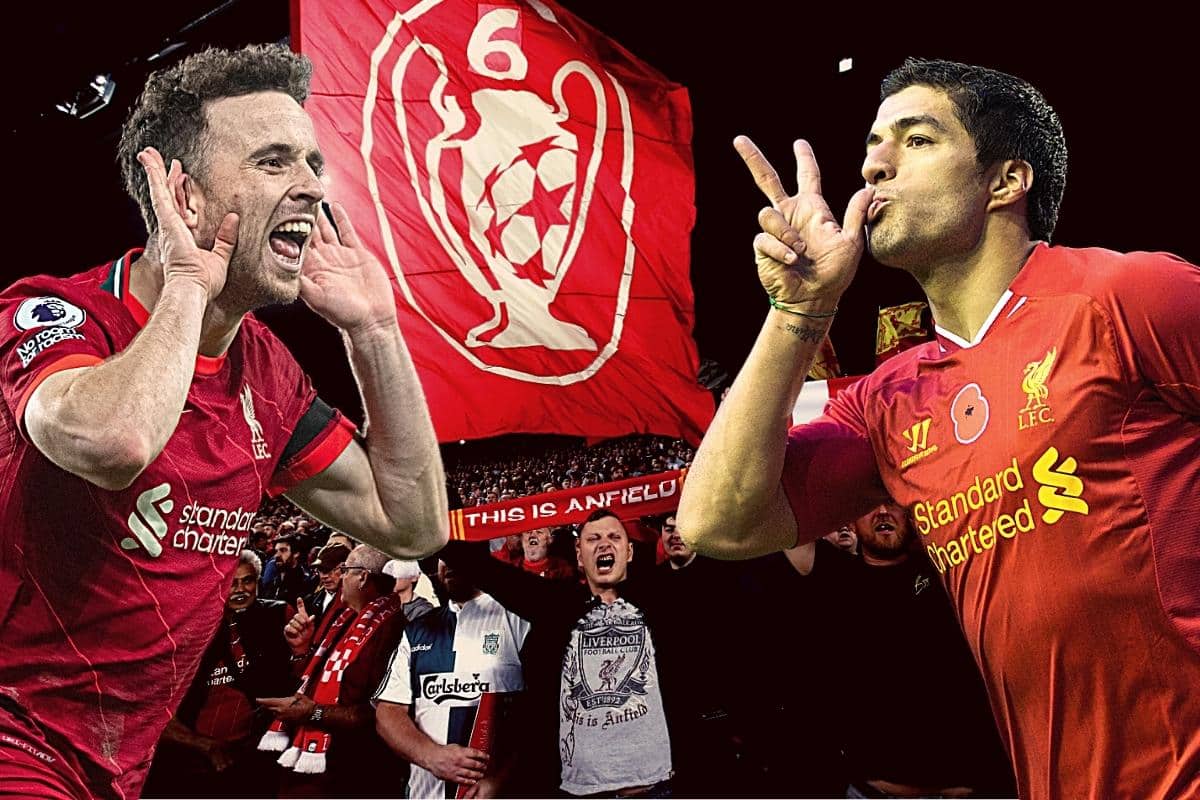 The Diogo Jota song taking off within the Liverpool fanbase got us thinking: what are the best player chants to grace Anfield throughout the modern era?

Jota’s cult status on Merseyside has been cemented with his relentless shithousery and knack for scoring goal after goal on big occasions.

It was only fitting, then, that Liverpool’s No. 20 was recently honoured with his own, rather catchy, song by the Kop.

So where does it rank among the best heard at Anfield?

I’ve been going to the match on a regular basis since approximately November 2003 and, after some thought, I have a top 10.

A special mention for the Riise, Morientes, Finnan, Gomez, Maxi, Mane, Wijnaldum, Oxlade-Chamberlain and Van Dijk songs, which all just miss out.

There are probably others I’ve also forgotten about. And regardless, it’s just a bit of fun.

Up the singing Reds. 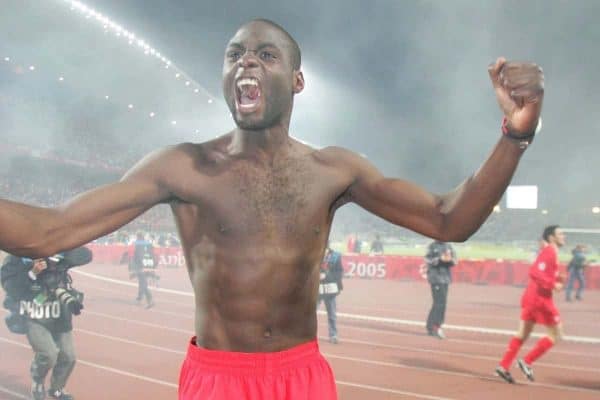 A bit mad/cruel to start with a song that takes the piss out of a player, but it’s quality and reflects the wonderful gallows humour that exists among football fans.

It also, in its own way, reflects the love Reds had/have for Djimi. God bless him.

Lyrically not that imaginative but was always fun to sing and, like another song to come on this list, there was a real satisfaction to getting all the way through it.

It also does that lovely thing of summing up just what a player means to the fans.

Simple but, because of that, easy to learn, and one of those songs that really takes off when the entire crowd sings it in unison.

A mention, too, for the other Salah song, which is lyrically more fun than this one but lacks its oumph.

7. “Steven Gerrard is our captain…”

Yes, I’m going with the other one, partly because I genuinely think it’s better and partly because the ‘original’ has been somewhat tarnished by the post-2014 shithouse-version.

In general, a bit mad that Stevie didn’t have a true banger. Ah well.

There weren’t many good songs in the Hodgson/Kenny/Rodgers eras, which was reflective of mood at the time.

This, however, was one.

Memory suggests it was sung before he even played for the Reds and immediately caught fire. Just like the man himself.

I wasn’t a fan of this when I first heard it, partly because it’s a bugger to learn/master.

But once you get it, you really do get it. And something of a rare beast in that it has two distinct verses.

With time, this could become a bona fide classic.

Not sure I’ve ever been happier than I was when singing this on the road to Istanbul.

Perfectly captured the joy of that time and always lovely to bang out. Flowed like water. Also elevated by the fact that Luis himself has embraced it so warmly.

3. “There’s something that the Kop wants you to know…”

My mate Sav and I are sure we heard this the first time it was sung – on the bus to Red Star Belgrade away in November 2018.

Another song tricky to pick up but once you got it, you got it.

A banger for a banging player and one which sums up the joy of the Klopp era.

A cult classic for a cult hero and one of those songs that builds and builds, gathering fervour as it goes.

Like the Carra song, huge satisfaction to getting through it, and god bless any Kopites who take it on and lead the way. Heroes, one and all.

A stone-cold banger, pure and simple.

Took off immediately and rolled like thunder, especially away from home, partly because of the associated body movement. Christ…the scenes.

A top tune for a top player during a top time for the club. Gracias, Fernando.