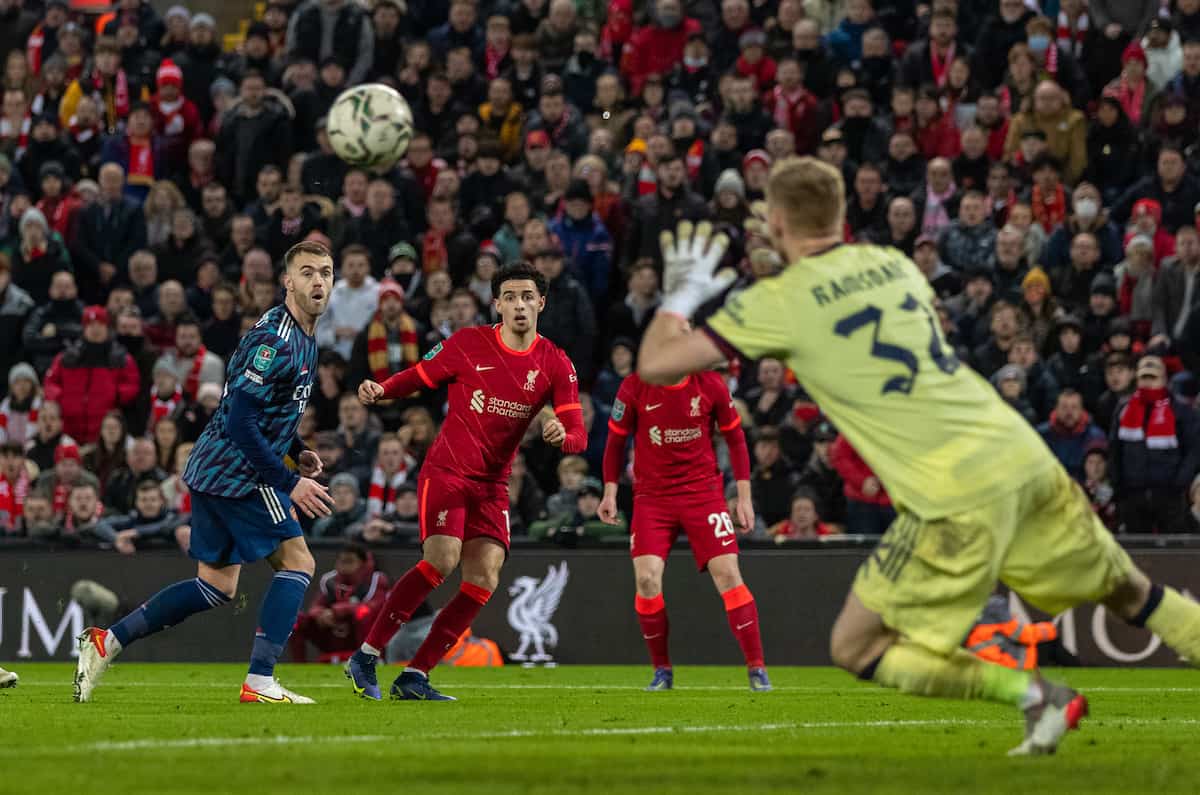 Liverpool produced a woeful performance as they drew 0-0 with Arsenal on Thursday night, with Curtis Jones one of the few positives to take from the League Cup tie.

The release of Jurgen Klopp‘s squad ahead of kickoff in the Anfield semi-final saw surprise at the strength of his selection, but also the makeup of his midfield.

Despite both Jones and Alex Oxlade-Chamberlain being available, the manager opted for a 36-year-old James Milner alongside Jordan Henderson and Fabinho – a trio proven to stifle Liverpool’s creativity.

Against an Arsenal side down to 10 men, the lack of creativity in that unit was felt heavily, with the Reds way too slow and predictable against a deep-sitting defence.

The introduction of Jones for Milner on the hour mark gave the hosts a spark, with the 20-year-old firing his side’s only shot on target throughout the 90 minutes.

Watching on, Liverpool fans picked up on his impact – with many praising the No. 17 on social media.

After a bright half-hour display, Jones was lauded…

Thought Curtis Jones was the only one who offered a bit ingenuity when he came on.
Only positive to take away from today. #LFC pic.twitter.com/QqICsRjQyH

Encouraging cameo from Curtis Jones. Should start while Thiago, Naby and Elliott are out. He injected a lot more quality in midfield.

Game was much more open 11 vs 11 but we should have won that comfortably. Missed out on a great opportunity to put the tie to bed. #LFC

Curtis Jones our best player within about 2 minutes.

Curtis Jones is a proper 10. Love him.

Curtis Jones the only bright spark. No pace up top in system that requires pace. Say what you want but Fans are right to demand squad investment

Curtis Jones should have started. Milner should now be winding down and being limited to cameos

curtis jones has been brilliant since he came on, mental how he isn’t starting

Curtis Jones should have started.

Thought Curtis Jones and Neco Williams both tried to be positive with attacking movements when they came on.

Liverpool’s best players tonight, aside from Joel Matip, were two of substitutes.

Neco Williams and Curtis Jones we’re both positive when they came on. Williams especially. He got the ball into the box which we missed with Trent struggling. #LFC #LIVARS

Don’t want to see anyone complaining about Neco Williams & Curtis Jones after this cameo.

Both changed the dynamic of the game.

How did Curtis Jones and Neco Williams carry that second half

Curtis Jones and Neco Williams were the only two players with a bit of balls to try and make things happen.

Frustrating overall, Neco Williams and Curtis Jones were brilliant though, not the end of the world, all to play for next week up the reds

It is telling that Liverpool needed the thrust of two 20-year-old squad players to give them the impetus against 10 men, with Klopp’s tried-and-trusted lineup falling flat.

Having ripped up his League Cup blueprint by naming his strongest possible side – on paper, at least – there is a sense that those who dragged the Reds to this semi-final stage should have been rewarded instead.

For Jones, there could even be bigger things on the horizon, beginning with a start against Brentford on Sunday.