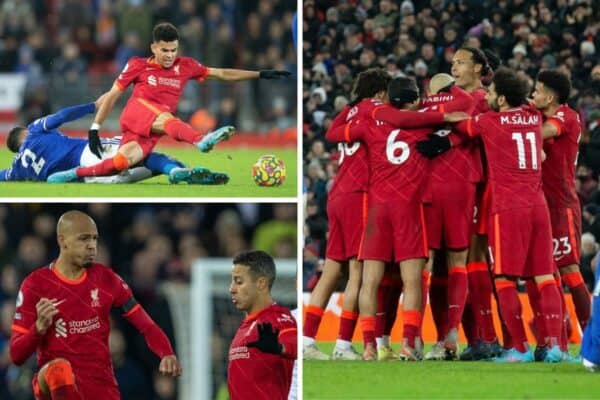 There was much to admire from Liverpool’s 2-0 victory at home to Leicester, not least a vibrant Premier League debut from Luis Diaz.

The Reds picked up a comfortable win against Brendan Rodgers’ side on Thursday night, as they maintained their good recent form – now eight games unbeaten.

Diogo Jota scored a goal in either half to seal the victory at Anfield and there were big performances all over the pitch.

There is a feeling that Liverpool’s momentum is growing all the time, ahead of what could be a memorable last three months of the season.

Here, This Is Anfield’s Henry Jackson (@HenryJackson87) is joined by Red (@TaintlessRed) and Liam Togher (@liamtogher88) to discuss Diaz’s display, the midfield and more.

How good was Diaz?

RED: Luis Diaz just looks like a Liverpool player to me. His skill, flair, movement, combativeness, combination football, work-rate and instant chemistry with others (especially Andy Robertson) makes me confident he will be a success at Anfield.

In fact, I have little doubt that he will become a world-class player.

The fact he looked like he had been playing with us for years is a testament to how good a player he already is – it’s crazy to think how much better he will be with more training and a full pre-season going into the following campaign.

LIAM: If you told me the Colombian maestro was making his first Liverpool start last night and I hadn’t known, I wouldn’t have believed you.

On his Premier League debut, the 25-year-old slotted into our attack as neatly as a Tetris piece, and as Red mentioned, already looking like he’s played with Robertson on the left flank for several years.

It was a pleasure to see him demanding the ball so often and, at times, Leicester‘s defence didn’t know how to handle him.

He looks like a man who could provide a spark in matches where we badly need it and already seems tailor-made for a Jurgen Klopp front-three.

There were a few small details that I’m sure the club will work on that he will soon adapt to.

Early in the game, Virgil van Dijk looked up and played a beautiful long pass over the defence which would’ve set Diaz free, but he was simply not used to having a centre-back who can play passes like that so was not expecting it.

He will soon learn details like that, but all in all, it was a very good Premier League debut.

HENRY: There’s not much I can add that Red and Liam haven’t said already!

Diaz was excellent throughout, and as both allude to, it genuinely looked like he was making his 52nd appearance rather than his second.

He just ‘looks’ like a Liverpool player, full of talent, energy, hard work, and he appears to be a perfect long-term Sadio Mane replacement.

Who partners Fabinho and Thiago?

RED: For a long time in the game Liverpool were just one goal up, but despite us dropping points from similar leading positions during this season, I had no anxiety that would be the case against Leicester.

That was not only due to us having Alisson and our first-choice back-four playing, but especially due to the foundation Fabinho and Thiago set.

These are two world-class footballers, both on and off the ball, and everything they did oozed class. They worked so well in tandem, instinctively covering spaces for each other or combining to progress the ball forwards, that you would be forgiven for thinking they had a telepathic connection.

Fabinho is the best defensive midfielder in the world, but we’ve seen that if the midfield selection either side of him isn’t balanced Liverpool can still look too open and he is left to do too much on his own.

The presence of Thiago immediately gives that balance and with it control – Leicester were never really in the game and Liverpool should have won by more.

I don’t think there is a clear choice when it comes to who is the third midfielder – rotation is the way to go to keep everyone fresh and competitive.

For a start, Thiago can’t play two games a week every week so if he is being rested I would always want Naby Keita as one of the three as he has the on-ball ability from deeper areas others don’t.

Elliott continues to impress whenever he’s picked with his technical ability and intelligence and he is more suited to playing the advanced right-sided No. 8 role than Jordan Henderson, who has struggled this season.

Henderson will still get games and Alex Oxlade-Chamberlain and Curtis Jones will also get minutes, but I think they are lower down the pecking order – with other midfielders fit, I would not play James Milner.

LIAM: After last night’s match, I reckon it’s safe to say that they will be two of our starting midfielders whenever they are available.

Fab again took on the role of the unsung hero, giving a performance of such selfless yet crucial ball-winning solidity that it must have reminded the travelling Leicester fans (when they weren’t otherwise occupied with their catalogue of anti-Liverpool chants) of N’Golo Kante in that title-winning 2015/16 season.

As for Thiago, he is a metronome. The way in which he effortlessly picks killer passes reminds me of Xabi Alonso in his Anfield pomp.

The identity of the third midfielder to start alongside them is harder to ascertain and I think it should come down to reading the opposition and the occasion, as Red says.

When it’s a case of needing thrust and exuberance to unpick a low block in domestic competition, I’m all for letting Elliott off the leash to build upon his impressive recent cameos and put his injury hell behind him.

For games that require cool heads and tactical discipline, however, it would be foolish to overlook Henderson.

There will be times between now and May when we will need the skipper to direct operations from the middle of the park.

HENRY: I think this is absolutely spot on from both.

Fabinho and Thiago were a joy to watch in their own separate ways against Leicester and there is no doubt that both would start a Champions League final if it took place tomorrow.

As Red and Liam correctly say, that third spot is very much down to the opposition, but there is still a clear pecking order in my mind.

I still think an in-form Henderson is the man who I, and Klopp, would go with in the biggest games, but there is no denying that he needs to up it this season.

At 31, though, his very best days look behind him and he is no longer a shoo-in every week.

Elliott looks an absolute superstar in the making and I want to see him more and more now, with his understanding with Trent and Salah on that right-hand side already looking so in-tune.

Keita and Jones are good, if inconsistent, options, while Oxlade-Chamberlain and Milner should be used sparingly and will likely leave this summer.

And how do you rate Liverpool’s title chances?

LIAM: Still very slim, but I’m happy that this remains a pertinent question.

When we had that wobble over the festive period, I feared a repeat of those horror first few weeks of 2021, but our response ever since the hard-fought win over Brentford four weeks ago has been impressive.

There is still faint hope of us making a proper race of it, just like in 2018/19, but even if we were to win our game in hand and win at the Etihad in April, there are still three points we need to gain somewhere and that’s reliant on us not slipping up along the way.

I’m not expecting anything better than second; I’d just like to see us going into April with a fighting chance of somehow usurping Pep Guardiola’s men at the summit.

RED: Unfortunately, Man City are big title favourites, but unlike some, I have not thrown in the towel.

If we can keep Alisson, Trent Alexander-Arnold, Van Dijk, Fabinho, Thiago and Mohamed Salah fit and available for the rest of the season, we will still have a chance, albeit a small one.

We just need to focus on winning our games and hope. Even if we don’t win the league, we have a decent chance of winning a cup treble which would be an incredible achievement.

I said at the start of the season I thought we had a better chance of the Champions League than the league this season and that still seems to be the case.

HENRY: I’ll be honest, I think the title has gone. Sorry!

In most other eras, I think we would still be in with a healthy chance of catching the leaders, given what a special Liverpool team this is.

Sadly, they have chosen to be incredible in the same era as a wonderful City side who go on freakish winning runs, barely drop points and have a bottomless pit of money to spend.

I know they drew at Southampton recently and there have been a few scratchy wins, but I just don’t see where the dropped points are going to come.

It will be disappointing not to win the title, but we were second-favourites in August so it is no disaster. The fact we are even competing with City is amazing in itself – without us around, this would be the Bundesliga now!

Let’s stuff them in the Champions League instead – how good would that be!