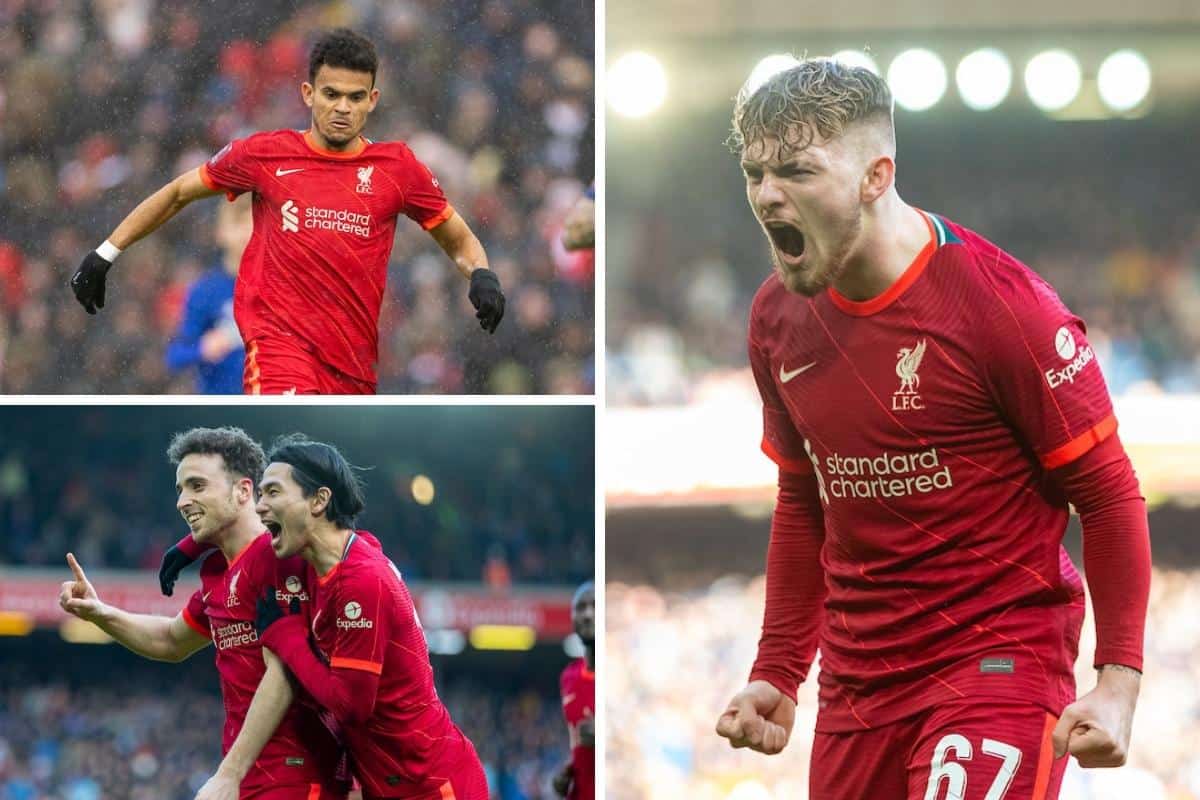 A debut, two comebacks and three goals were Liverpool’s match at a glance in the 3-1 win over Cardiff, which secured passage to the next round of the FA Cup.

Aside from the inability to claim a clean sheet, the Reds’ Sunday afternoon exploits could not have panned out any better on return from a two-week break.

The cobwebs certainly needed to be cleared in the first half, with the second 45 making for a memorable occasion as Luis Diaz made his debut and Harvey Elliott scored his first goal for the club after four months out.

It left plenty of positives with Klopp’s side now in the last 16 of the competition for only the second time during his tutelage, with Norwich the visitors at the start of March.

Here, This Is Anfield’s Joanna Durkan (@JoannaDurkan_) is joined by Jay Pearson (@JimmyCully), who was at Anfield, and Owen Collins (@OGBCollins) to discuss all the positives from the game before looking forward to what is to come.

There were positives aplenty… 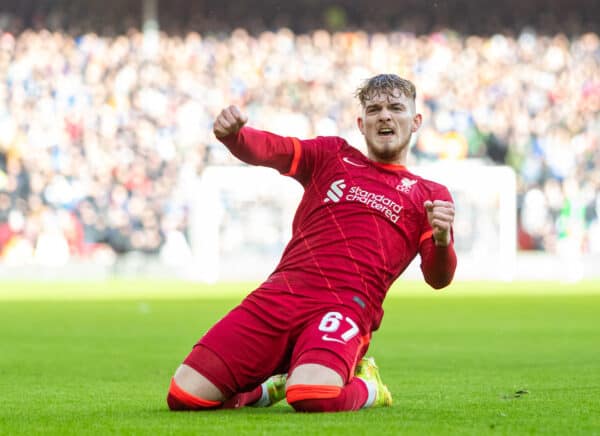 OWEN: An early kick-off, after a long break, in the FA Cup fourth round – this had all the hallmarks of a potential banana skin, so the overarching positive is that we’re still in the cup despite a bit of a disjointed first half.

JAY: First off, Harvey Elliott. My word! I knew we would see him, but what an impact.

You’re always nervous when a player comes back from a serious injury. You worry that it will affect them to the point they are either not the same or they take a while to get back to the player they were before the injury.

Well, take that theory and put it in the bin! He has come back and within his first few touches you could see he was on it, but the way he took that goal was incredible. A fantastic situation to get your first goal for the club.

OWEN: Though more eloquent words will surely be spoken about the diamond that is Elliott, it shouldn’t go unmentioned that he’s now beaten Trent’s record as our highest-numbered goalscorer. Over to you, Tyler Morton…

JOANNA: Now wouldn’t that be something, Owen!

It was more than you could have wished to see from Elliott, who I have to keep reminding myself is only 18!

He speaks and acts with maturity beyond his years and the reaction of Klopp and his teammates says everything, a genuine feel-good moment wasn’t it? 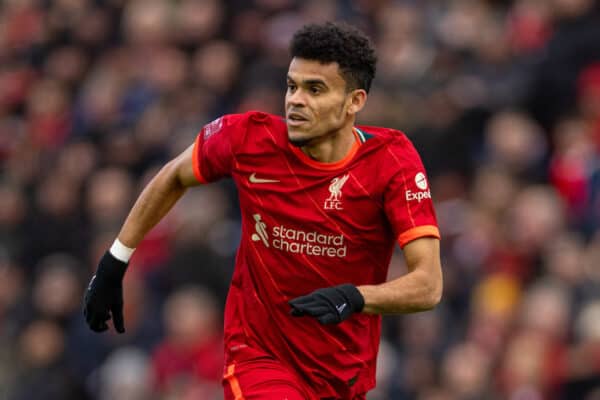 JAY: But what about Diogo Jota being Diogo Jota again. That’s a tough header to get right for many players, but we’ve seen him do it before. He’s just got that natural goal-scoring ability like Fowler, Owen and Torres. It’s instinct.

I’m still in awe of him every time he plays.

JOANNA: On the line of forwards, Jay, I’m completely in on Luis Diaz. Not that I wasn’t before but those 30 minutes have left me excited, to say the least.

That immaculate close control on the by-line was beautiful and he showed the desire to press and made the movements we want to see, and he promises so much more. In the words of the boss, ‘I love it!’

Let’s just not have another injury scare though!

JAY: I was sat in the lower Kemlyn, Kop end, so I got a good look at him. He seemed quite lively, asking for the ball, making some decent runs and that little turn that led to the goal for Minamino was great!

I think he can take a lot from his first experience of English football. Excited to see how he progresses. 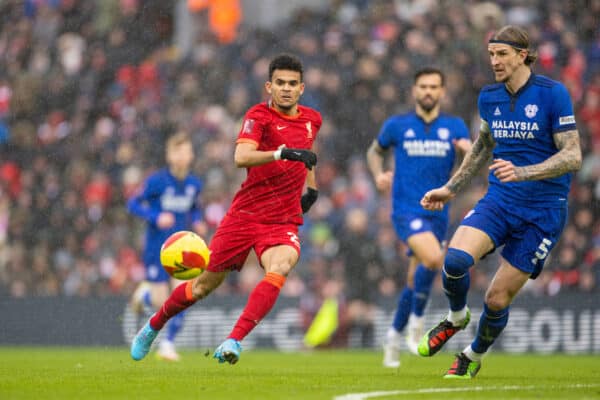 OWEN: Agreed, on the evidence of his cameo, Diaz won’t require much bedding in, which is the best possible news, and an honourable mention to Kostas too, who survived Ian Wright’s mangling of his surname to produce another creative yet tenacious and hard-working performance.

Is he becoming the Dirk Kuyt of the left-back world?

Liverpool’s squad is shaping up perfectly, does it give you a confidence boost for what’s to come? 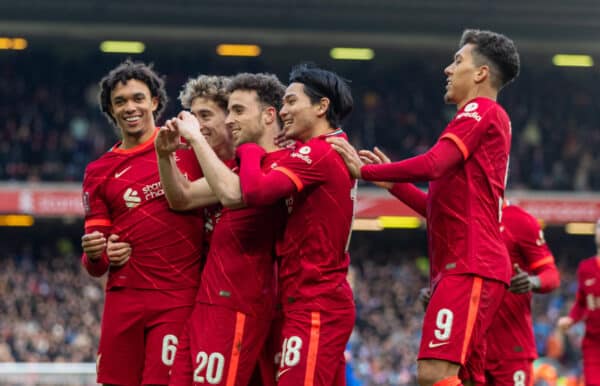 OWEN: It’s a huge confidence boost. We’ve got a massively congested spring coming up, thanks to such a successful season so far.

In nearly every position, we’ve got enough talent that we can finally afford to rotate without either a massive drop in quality or – crucially – disrupting the shape and style of the team.

With players like Taki, Ox, Konate, and Kelleher, we’ve also got a good enough side to put a proper cup run together at last, without having to run our first XI into the ground.

Obviously last season we were decimated by injuries, but by January, there was also the factor of everyone looking knackered. We’ve made it this far and nobody is showing signs of the same lethargy, which itself is a testament to the health of the squad (in both senses of the word.)

We’ve got to February, and have only lost two games in all four competitions, and now we’re adding Diaz and Harvey to the mix; if you’re not excited for the next three months, you’re not paying attention! 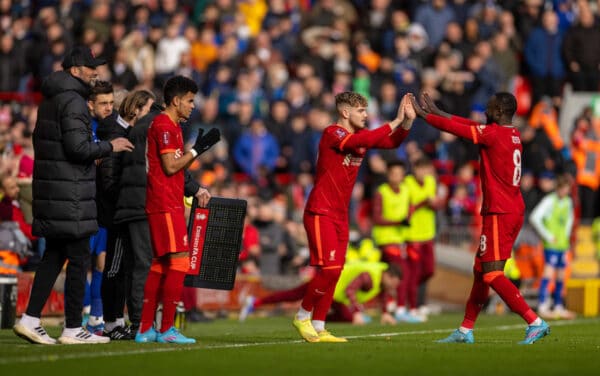 JAY: It really does! It’s early February and we are fighting on four fronts. That is rare for this team. I don’t mean that in a negative way, I just mean over the years we have only really had a squad to cope with two competitions.

That is fine when it’s the league and European Cup, but the squad is looking really good.

Adding Diaz gives us that extra option we didn’t expect to have until next season, we have quality returning to the squad with the likes of Thiago and Elliott. We are rotating players and giving minutes to more players which right now, it never looks like the squad is depleted.

Whenever you see the lineup, you think..”Yeah, that’s good enough to win today.” Oh yeah……Salah and Mane have to come back too! Would you look at that!!

JOANNA: You both have said it all there! It’s such a luxury to be in this position at this stage of the season.

We’ve not always been notorious for a strong January or February under Klopp and to have the treatment room clear is a sight to behold with four competitions on the go.

Consistency will still be key in the XI but the options to rotate and inject off the bench are a welcome problem to have and the challenge is to keep it as such, but for now, you could not ask for more.

And as Jay said, we don’t even have Salah and Mane in the squad currently. Frightening, for the opposition that is.

How would you line up against Leicester then?

JAY: This is a tough question! Which is delightful! Because we have so many options.

With it being at home, the obvious one is (if they are back) I’d throw Mane and Salah back in the squad. If they are fit enough, you start them. Start them in a three with Jota.

But all likelihood is that probably only one of them would start and come off early for the other later on. So for me, I’d give Diaz his first start.

It’s at Anfield and it’d get it under his belt early, with Jota and one of Salah or Mane playing alongside.

In midfield, I have a feeling Thiago or Elliott start. Personally, I’d go Thiago, Fabinho and Henderson. Bring Elliott on later on. Thiago just oozes class, as soon as he got the ball against Cardiff, his head was up and he’s looking for a pass right away and yet again as he does every game, he sees a pass that we don’t see! Be great to see him back in the lineup.

And the back five picks itself: Alisson, Trent, Konate (he didn’t do much wrong against Cardiff) Van Dijk and Robbo. Get the three points and then move on to Burnley. 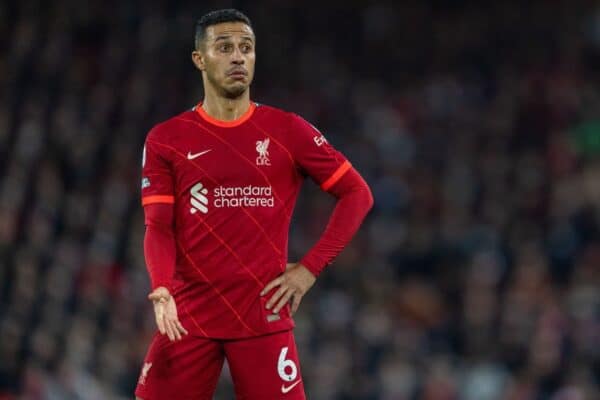 JOANNA: For me, I’m keeping Mane and Salah far away from this one. They will both be mentally and physically drained from AFCON, and as we mentioned we have options.

Klopp was quite positive about the prospects of one featuring but they each had the weight of the world on their shoulders and hardly missed a minute, Salah played a total of 750 minutes in less than four weeks.

I wouldn’t be opposed to Diaz slotting in next to Jota and Firmino, with Fabinho, Thiago and Henderson as the midfield trio and from Jay’s back five, I’d change only Matip for Konate. 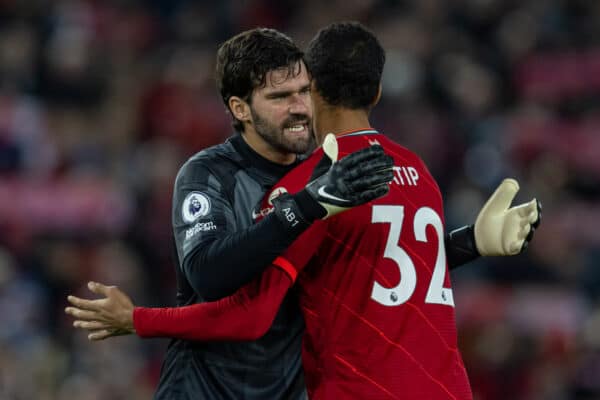 OWEN: Alisson returning between the sticks is a given, same surely with Fabinho, and I’d be loathed to let Matip get too rusty on the sidelines, so would drop him back in for Konate.

Despite singing the praises of Tsimikas before, I’d return Robbo to the starting XI too – January proved that he’s still comfortably our first choice.

I too would think Thursday will come too soon for Mane and Salah, especially after extra-time, although the latter will have a point to prove and could be a fierce choice off the bench.

A full debut for Diaz would not only get the Kop slathering but also provide an element of unfamiliarity against a side who we’ve seen a bit too much of lately – and who we owe a thumping to, after December’s defeat!