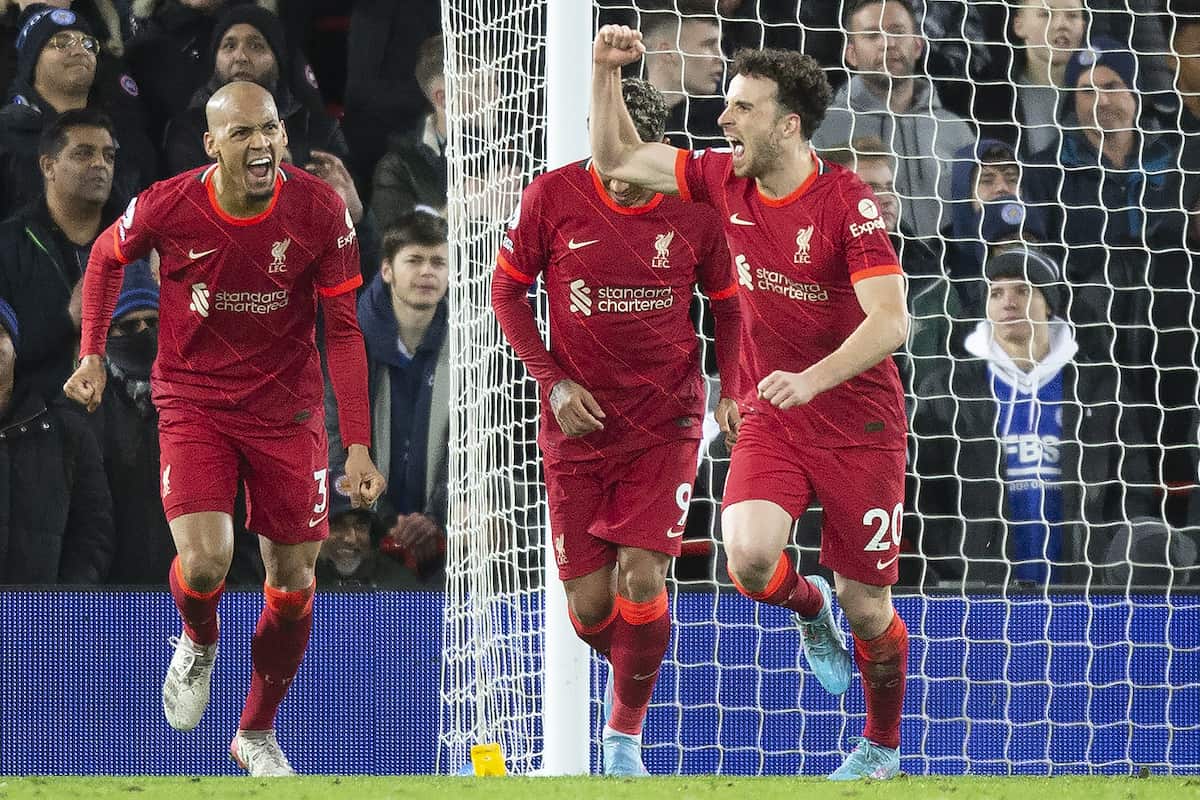 Liverpool eased their way to a 2-0 win at home to Leicester on Thursday evening, with Diogo Jota at the double to hit his 29th and 30th goals for the club.

The Reds hosted the Foxes at Anfield, looking to stay in touch with Man City after their win over Brentford on Wednesday.

Leicester had their chances early on but Liverpool dominated, taking the lead through Jota’s 16th goal of the season.

The victory takes Jurgen Klopp‘s within nine points of City with a game in hand, as they remain in the Premier League title race.

There was much happiness at the final whistle…

FT: #LFC 2 Leicester 0: Momentum maintained as Liverpool reduce Man City's lead at the top to 9pts with a game in hand. Jota the match-winner with both goals. 17 for the season. Much to admire. Dazzling full debut from Diaz and Thiago playing with a swagger. Fabinho excellent.

Diaz excellent, Thiago ran the show, Van Dijk produced a performance that's normal for him and a career-best for most!

Although it was 1-0 for a long time, and we've had frustrating games when we've dropped points from leads this season, I did not feel any anxiety tonight not only because we had Ali and our 1st choice back 4 playing but because of Fab and Thiago controlling in front.

Job done. What a team

That was just brilliant from Liverpool. Properly brilliant. Should’ve been about 5-0 for how foot-on-the-throat we were.

I was only anxious there because of the scoreline and the missed chances, rather than the pattern of the game. Liverpool were in control, and we've not said that often enough this season. Fabinho/Thiago clearly key. The last 30 mins or so were excellent. ?

Some were hugely impressed with league debutant Diaz…

You know, if Harvey Elliott doesn't.

Easy to understand why Liverpool and Klopp were so adamant at getting Luis Díaz in January, to stop any other club from getting him. Insane close control on the ball, incredible movement in and around the box, and a big threat with his pace. Skilled presser out of possession too.

Diaz was brilliant. Biggest compliment I can give him is that he looks like he’s played in this team for ages. Deserved a goal.

Diaz is gonna be a phenom.

Jota is becoming more of a hero by the week…

30 goals in 60 games for Diogo ? pic.twitter.com/sdlYVfwmM2

How important is Diogo Jota? That is the 10th time this season he has scored the first goal in a game; his second of the evening has lanced the tension and given Liverpool three big points ?

The Reds are still in this fight…

Another huge 3 points!
Great performance from the whole team. A few standout performances from Fab and Jota and what a start from Diaz! This squad stays for fit and we can fight for the lot!

Title charge is still on ???#LFC

Class performance. Could've been more. Great debut from Luis. Thiago is back. The Egyptian King is back. Watch out city. #LIVLEI