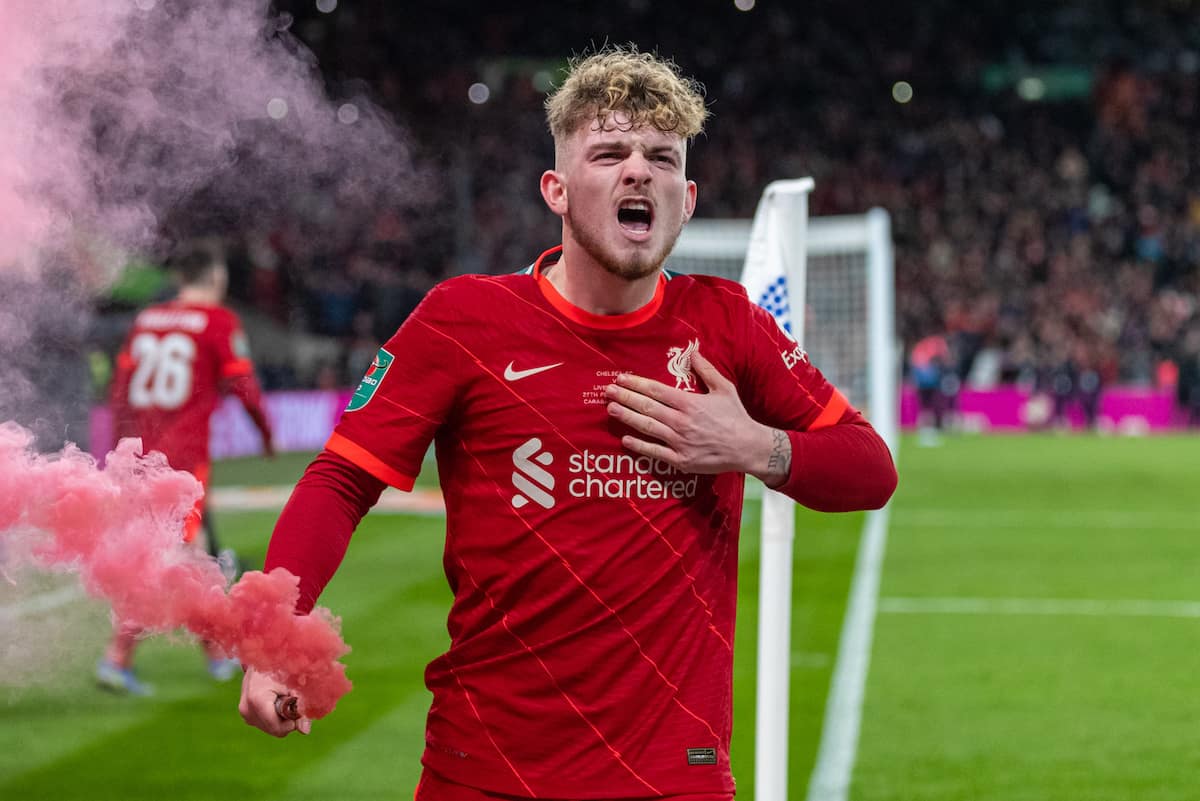 The FA have contacted Harvey Elliott after he picked up a supporters’ flare in celebration after Liverpool’s League Cup final victory over Chelsea at Wembley.

It was one of the defining images of the night, Elliott clutching a red flare as he roared at the travelling Kop, having scored in the 11-10 shootout win.

The moment showed the youngster’s passion towards the fans, after a difficult five months in which he has recovered from a long-term ankle injury to return to the first-team fold.

Elliott had not been part of the 20-man squad for Sunday’s final, but injury to Thiago handed him a place on the bench and, ultimately, Jurgen Klopp turned to his No. 67 during the game.

However, less than 24 hours after Liverpool’s triumph, the teenager is now subject to an FA investigation, with flares banned from all stadia.

Sky Sports relayed the news, with Elliott contacted by the FA for his “observations,” while the club declined to comment on the situation when approached.

It is a strange area to focus on, particularly given the wider problems in the game, and Liverpool fans have offered their suggestions in response:

He was trying to remove the flare from the pitch https://t.co/qLrMqNx531 pic.twitter.com/wvDtiYEyd7

"Observations: None. My vision was blocked by red smoke and the cloud I was floating on.

Lmao, acted pretty quickly in this eh? Imagine being this stuck up lol https://t.co/l7sesGiQdZ

Hopefully he'll reply, "I observed I'd just scored a pen to help win my 1st major honour at 18, for the club I supported as a kid. In a moment of pure unadulterated joy I picked it up and shared that moment with the supporters. Because I'm young and human. Now go sort out VAR." https://t.co/bdNZe5hwqB

I hope Harvey Elliot responds to this with a 2 minute long video of him just laughing. Fucking pathetic. The FA, FIFA & UEFA are embarrassing themselves even more day by day these days. Concentrating on the wrong ‘problems’ in the sport. https://t.co/yhtVfuzb6c

You’re telling me the FA watched that entire match yesterday and the one thing they thought was wrong was a kid picking up a some smoke https://t.co/tENFXRakb3

In other words, have a day off jobsworths.