Jurgen Klopp insisted he takes Manchester City boss Pep Guardiola’s tongue-in-cheek remark about Liverpool being a “pain in the a**” as a compliment as the rival teams prepare for another Premier League title run-in.

Guardiola’s comment last week referred to the Champions League and the sides he thinks could be a threat to City finally getting their hands on the most prestigious prize in European club football.

But Klopp recognises how evenly matched they have been in the last few seasons in the English top flight and his side could close the gap on the league leaders to three points by beating Leeds in their game in hand on Wednesday.

It is for that reason Klopp takes no offence at Guardiola’s quip and the Liverpool manager demanded the Reds continue to be a thorn in City’s side, even if he thinks it is too early to make a judgement about the title race.

“What Pep said, we are the pain in the lower back, or can be, that’s a good description and that’s how it should be,” Klopp said.

“We try to be annoying as somehow possible until we have a chance to overtake.

“I don’t know when that will be, if that will be the case. But I always said in a decisive moment in a season is not now, it’s March or April, you have to be close enough to make a decision in your direction.

“For us, first and foremost, it’s important we are close to the top, whoever is there because that obviously shows that something is going in the right direction.

“With all respect what City’s doing is incredible. We are pushing each other as well. There is no chance to get a bit soft because the other one will be there to catch you.”

City’s bid for a fourth league title in five seasons under Guardiola was dealt a setback after a 3-2 defeat against Tottenham last weekend, but Klopp feels they can only be toppled if Liverpool win all 13 of their remaining fixtures.

Yet Klopp was adamant the Merseysiders, who will be without Roberto Firmino and Diogo Jota against Leeds because of injury, are not casting their glances towards their visit to the Etihad Stadium on April 9.

That clash – the teams’ second meeting of the season following a 2-2 draw at Anfield last October – might prove decisive as to which direction the title race would go but Klopp believes they have to take one game at a time.

“What we do is pretty special and I don’t expect that to happen every week,” Klopp said.

“You cannot turn round games every week but we have to be at our absolute best to play the best possible season for us. 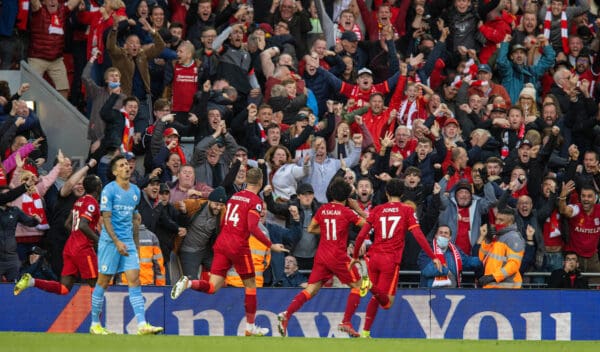 “Unfortunately only twice a year – at least in the Premier League – we face the other team. The first one was a draw where we were not brilliant but good enough to get a point and the next one is not played yet.

“We play all the others as well: we play Tottenham still, United as well. We don’t sit here and count points and wait for the middle of April for the City game.

“It’s difficult but what the boys did over the past four years is pretty special and I’m happy but not overly happy, not that happy where I think ‘OK that’s enough’. We have to go from now on.”