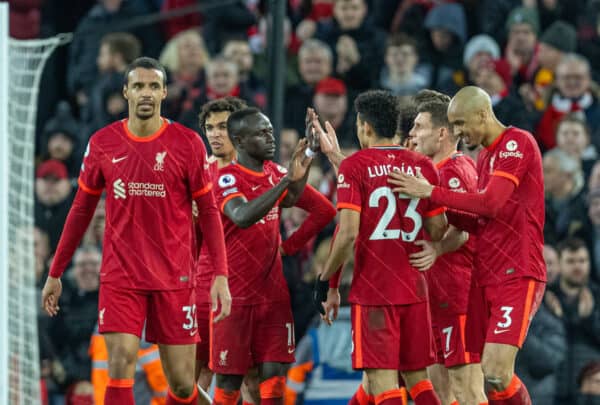 It was cruise control for the Reds in what was a league clash with significant permutations, but the 6-0 win over Leeds is to be long remembered for Joel Matip‘s brilliant finish.

Before the rampage kickstarted, Alisson provided an early unwelcome scare with a heavy touch and Dan James nearly made him pay the price. Lucky indeed.

From there on out though, all the jitters were gone and the No. 1’s hands were clean and safe on the odd occasion he was required. His 17th clean sheet of the season in all competitions.

Back in the XI after resting up against Norwich and it took some time to refind his touch, but with the Reds doing the business in the final third it was the ideal time to find his groove.

There on the covering run when needed and certainly was one to grow into the match, a peach of a pass with the outside of his boot showed as much, as too his fluid movement across the pitch.

It’s Matip’s world and we’re all just living in it.

It finally happened, the moment we’ve longed for. A marauding run, a one-two with Salah and a first-time finish that any striker would be proud of. Ever having a bad day, it’s one to watch on a never-ending loop.

He was instantly untouchable, never mind his defensive showing on this one. What a man.

There was no traditional target man on this occasion for the first hour, with Dan James the leading man and pace the potential danger – but the Dutchman had it covered all the same.

Chopping out Raphinha or holding that disciplined offside line, Van Dijk was again at his effortless best and he loves a clean sheet, but he also loves a goal.

Leeds are notoriously poor at set-pieces and at the death, he twisted the knife with a thumping header to complete the route with his third goal of the season.

With a rest over the weekend, it was straight back into the thick of it for the Scot, setting up the opener with his cross leading to the penalty with Stuart Dallas’ handball.

His connection with Luis Diaz continued to go from strength to strength as the pair readily played each other in and made space.

A solid and energetic 90 minutes that continually had Leeds on alert, and was unlucky not to see his curled delivery converted by Salah.

Perhaps not at his elegant best having not been as clean in possession as we’ve come to expect, notably in the first half, as a late attempt on goal showed.

The goalposts needed to move three feet, at least, and then all would have been well.

As Liverpool turned the screw, Fabinho followed suit and tidied up nicely when needed and importantly, came through unscathed.

A lot has been said of the Spaniard over the last week and for good reason, with his work in-tight and to find space a real treat as he continued to act as the metronome of the side.

Enjoyed a handful of his trademark sliding tackles to keep Leeds under pressure and he left the field just after the hour mark with a 93 percent pass success rate, time to rest up before the final.

After being omitted from the last three matchday squads, Jones was handed another valuable opportunity alongside two of the first midfield names on the teamsheet.

Understandably rusty and did keep hold of the ball for too long at times, but in equal measure readily triggered the press and got the Reds into good advanced positions as a result.

Took it up a notch in the second, notably outmuscling Harrison and driving into the box and could have gone for it himself instead of looking to set up Salah.

Two penalties, two confident conversions for the Egyptian King in the space of 20 minutes proved only part of a devastating first half for Salah.

A wonderful pass back to Matip set up a goal to remember and another set up his second penalty after Mane was impeded by Luke Ayling, felt as though everything he touched turned into gold.

Instrumental to the first four goals and that’s now 27 goals for Salah this season and there could’ve certainly been more!

An excitement machine. It’s still early days and the potential is frightening. Pacey, eager and playing as though he’s been here for months not weeks.

Was unlucky not to open the scoring as his curled shot looked destined for the net only for Mane to be stood in its path, and his ability to turn on the afterburners is a delight to watch.

Has a real appetite for the contest.

Another start through the middle for the No. 10 in a performance that readily saw him drop deep into space to connect and drive forward, with one of his runs leading to the second penalty.

A few loose passes here and there and was often the one to draw in Leeds‘ markers and manoeuvred himself into the perfect position twice late in the piece for two goals in the space of 10 minutes.

Both instinctive and composed finishes, indicative of the mood he has returned to Liverpool with following his AFCON success with Senegal.

Jordan Henderson (on for Thiago, 68”) – 7 – Lively cameo in view of some minutes ahead of Sunday, an assist for Mane with a lovely pullback was the cherry on top.

James Milner (on for Jones, 77′) – 6 – Another appearance against his old club and received a welcome reception from home and away fans.

There was to be no taking Leeds lightly despite the lure of a cup final around the corner, but it was firmly put to the back of the mind, with a strong XI more than getting the job done.

Alexander-Arnold and Robertson were able to blow out some of the cobwebs after their rest, Thiago excelled and was kept safe and sound and Salah will be bursting with confidence, not that he wasn’t before.

The title race isn’t a topic Klopp seeks out but his nine fist pumps for the Kop said all one needs to know about where his head it at.

Three points are all that now separates Liverpool with Man City, and now we also have an advantage with goal difference – the race is well and truly on!

Now though, it’s all eyes on the League Cup final!