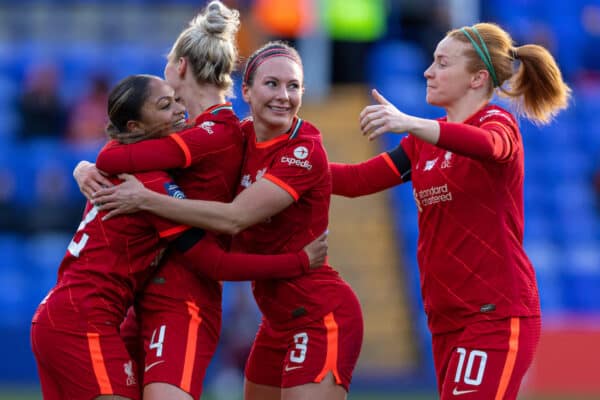 The Liverpool FC Women made it seven wins in a row, 14 games unbeaten and pushed their lead to 10 points in the Women’s Championship with a 3-0 win over Sunderland.

It has been a cathartic season for Matt Beard’s Reds, who have endured difficulty and constant upheaval in recent years, but are now finding consistency and title-winning form.

They find themselves in the Women’s Championship at present, owing to the struggle of seasons gone by, and are now established as the team to beat at the top of the table.

Sunday saw Liverpool extend the gap between them and London City to 10 points as they produced an excellent second-half display to put Sunderland to the sword.

The Birkenhead weather had a big influence in a tough first half as the Reds sought an opening, with Taylor Hinds and Rachel Furness both having notable efforts from range, while Rachael Laws was required to keep Sunderland at bay with a string of saves.

There were two convincing penalty shouts before the break, too, with Yana Daniels and Katie Stengel brought down, but while those were waved away, Liverpool eventually got their chance from the spot soon after the restart.

Ceri Holland played Stengel through in the box and, after being taken down by Neve Herron – who received a red card – the American striker stepped up to convert.

Substitute Megan Campbell caused trouble with her long throws, and after seeing one go straight in and rightly ruled out as there was no touch when in play, she was able to set up the move that saw Daniels make it 2-0.

Stengel provided the assist for the second and was then brought down again in the box to allow Missy Bo Kearns to deliver the killing blow in the final minute.

It was another brilliant performance from Liverpool, and in keeping a 10th clean sheet of the season, goalkeeper Laws broke own record for the most in a single league campaign for the Reds.

Riding high in the league and looking on course for promotion, Beard’s side now face a tough test in their next outing – an FA Cup tie at home to Women’s Super League table-toppers Arsenal after the international break.