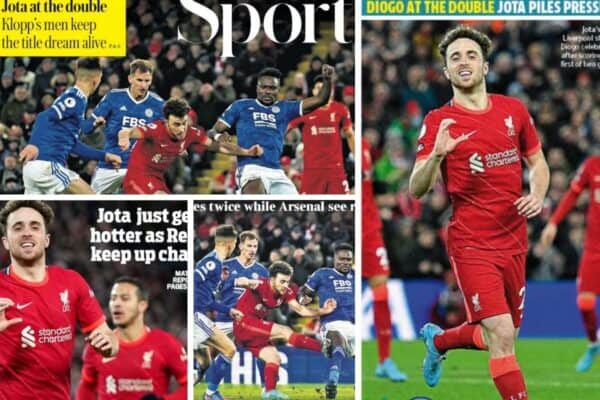 The watching media were full of praise for the duo of Luis Diaz and Diogo Jota after Liverpool’s 2-0 win over Leicester, on a positive night at Anfield.

The Reds knew that victory was essential in the Premier League title race and they duly delivered against Brendan Rodgers’ spirited side.

Jota gave Liverpool a first-half lead from close range, but Leicester refused to go away as the minutes ticked by.

The Portuguese completed his brace late in the evening, however, securing three more valuable points for Jurgen Klopp‘s men.

Diaz was one of those who received the most praise…

The Independent‘s Karl Matchett loved what he saw from the Colombian on his Premier League debut:

“There might have been a bit of circumstance about Luis Diaz lining up for his full debut for the club, with Sadio Mane not yet considered for selection after a late return from the Africa Cup of Nations and Mohamed Salah only sub after four straight games going to extra time, but it was still a confidence-boosting call for the Colombian.

“And, as he showed, it must have actually been a fairly routine choice for Jurgen Klopp in the end, as he played a big part in the Reds’ 2-0 win over Leicester.

“Diaz was, for an hour, the main attraction.”

David Maddock of the Mirror was another who was hugely impressed:

“They may just have unearthed yet another star in the making from the conveyor belt of talent that has fed into Anfield during Jurgen Klopp’s reign, with a pulsating Premier League debut from £37m man Luis Diaz.

“He was unlucky to cap his first full appearance with a goal in front of the Kop, denied only by Leicester keeper Kasper Schmeichel’s wonderful saves.

“The signs look good, with the former Porto player integral to most of his side’s attracting threat in the first half, as the visitors sat with a deep defensive block, and a vague idea to play on the break.”

Paul Gorst of the Liverpool Echo even drew comparisons between Diaz and Luis Suarez:

“With Mohamed Salah understandably reserved for bench duty after his efforts for AFCON runners-up Egypt, all eyes were on £50 million Luis Diaz who made his Premier League debut following the recent move from Porto.

“The new No. 23 was a hive of activity all game and his all-action displays have already drawn some hushed comparisons with the last Luis to sign for the Reds in January by the name of Suarez.

“The 25-year-old will do well to earn remarks like that on a more prolonged basis but it’s been an encouraging start for Liverpool’s first-ever Colombian star.

“His standing ovation late on was richly deserved.”

The irrepressible Jota was also immense…

This Is Anfield‘s James Nalton focused on the striking brilliance of the Portuguese:

“Jota’s ability in the No. 9 position probably deserves its own section.

“Though there were plenty of other impressive moments in this win, and a number of names who could be picked out for having good moments, it was ultimately Jota’s finishing that won the game.

“Not just that but his movement, runs, and positioning in this area of the field mean he’s always on hand to score even if he’s not done much else to that point.”

“His influence and importance seems to grow with every passing week. In 18 months he’s gone from someone who was expected to be a £40m squad player to the central point of the attack.

“Jota’s tally for the season is now up to 17, his career high in the top flight despite several months of the campaign still to go.

“With Roberto Firmino back in the starting XI the Portuguese goal had to drift out to the right with his teammate assuming his usual central role – not that it affected his influence.

“He moved back to the middle once Salah emerged from the bench and showed his goalscoring instinct to poke home in front of the Kop.”

The title race is still far from over…

Ian Ladyman of the Mail feels Liverpool are primed to match City:

“For Liverpool now, every Premier League game must be won. It’s as simple as that. It seems a ridiculous thing to say but their great modern rivals Manchester City have ensured that Liverpool’s task really is that arduous. No room for error. No off days or nights.

“So this was another step in the right direction against a dangerous, if inconsistent, opponent. Jurgen Klopp’s team beat Leicester thanks to two Diogo Jota goals, one in each half. Leicester’s best player was their goalkeeper Kasper Schmeichel and that said everything.

“Liverpool remain nine points behind City with a game in hand which is why this victory was so important. With Mo Salah and Sadio Mane back now from the Africa Cup of Nations – Salah came on as a substitute here and was excellent – Liverpool have come through what could have been a difficult period without them and can now look forward to some fresh impetus.”

Maddock was of a similar thought process:

“The neutrals can breathe easily again for a few more days at least…Liverpool are not giving up their title hopes without a fearsome scrap.

“They maintained an admittedly distant pressure on leaders Manchester City, with an impressive, sometimes dogged, sometimes delightful victory over Leicester that showed they still have a real interest in the fight.

“The second half was all Liverpool, with Salah’s class to the fore, especially when he deliciously dummied Amartey, and Diaz showing energy and desire. Jota got a second late on, with a pass from Joel Matip of all people.

“It was enough to sustain the title race for a while longer, and for that, those outside east Manchester will be glad.”

Finally, the Times‘ Henry Winter claimed Liverpool are still in there fighting, even though it is a tough ask:

“Liverpool are not giving up the chase, however challenging it looks. They maintained their dutiful pursuit of Manchester City and certainly do not give the impression that it is a mission impossible.

“Liverpool are now nine points behind City with a game in hand and have still to visit the Etihad in April.