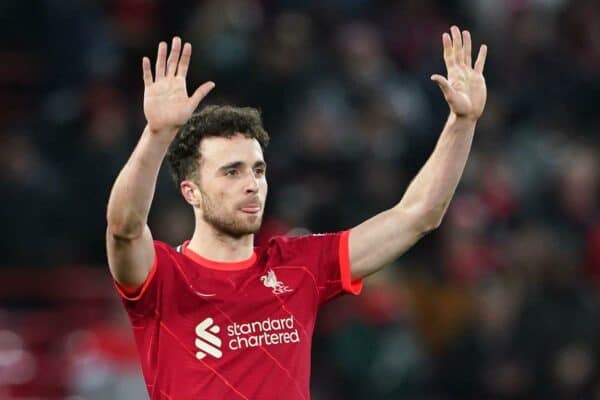 It was a comfortable and entertaining win for Liverpool against Leicester City, with plenty of positives to take.

What a difference a signing makes

Luis Diaz‘s addition to Liverpool’s attacking ranks has made them look immediately stronger.

With Sadio Mane still away after Senegal’s Afcon win and Mohamed Salah on the bench, the front line still looked full of quality thanks to the new addition.

That he is trusted so quickly — not always the case with new signings — says a lot about how highly the coaching staff, as well as the recruitment team, rate him.

Jota started from the right tonight, but his goal at a set-piece was typical of an instinctive striker. He’s a genuine option through the middle as a first-choice striker giving Klopp a number of potential combinations in the front line.

Liverpool now have six players to choose from for those three forward positions. And in Minamino they have a player who’s been very useful in the absence of Mane and Salah and one who won’t mind being the sixth option now they’ve returned and Diaz has arrived.

Anyone lucky enough to get tickets to watch Liverpool these days should definitely make sure they turn up for the warm-up.

The technique and skill these players possess are not only on show for 90 minutes but also 45 minutes before kick-off.

The addition of Luis Diaz has added an extra dimension to this. He’s both rapid and skilful, and his full range of technical ability will become apparent throughout the year.

The Colombian may not be the same profile of player as Roberto Firmino, but there are similarities between them. These mostly lie in their ability to work hard and be inventive in equal measure.

Thiago, meanwhile, is the footballer equivalent of a Family Guy cutaway scene. There are moments in his game that might not fit with the overall context of the match itself, but can nevertheless be the highlight of this particular show.

Then when he does slot into the rest of the storyline, it’s usually with something outstanding, such as his attempt on goal from outside the area in the first half.

Add Elliott, Salah, Matip et al(isson) and you have one of the best teams to watch in Europe.

Though alluded to earlier, Jota’s ability in the No. 9 position probably deserves its own section.

Though there were plenty of other impressive moments in this win, and a number of names who could be picked out for having good moments, it was ultimately Jota’s finishing that won the game.

Not just that but his movement, runs, and positioning in this area of the field mean he’s always on hand to score even if he’s not done much else to that point.

Prior to his first goal, he’d hardly been involved. Only Alisson and Patson Daka had had fewer touches.

Diogo Jota had hardly been involved before giving Liverpool the lead. Scores with just his 9th touch of the game.

But that didn’t matter as when the ball fell to him he was ready.

In the second half he moved to the central position when Roberto Firmino was subbed, and duly grabbed another goal thanks to a run through the middle on to Joel Matip‘s excellent pass.

There’s no doubt Salah would have wanted to start tonight’s game. He’s the type of player who’d want to be back playing football as soon as possible after a disappointment such as losing the Afcon final.

We’ve seen and heard how much winning that competition means to Mane, and losing it means just as much to Salah in the other direction.

He eventually had to settle for a place on the bench against Leicester and a second-half appearance — probably wise from Klopp given the minutes his star forward racked up in Cameroon.

But it didn’t take Salah long to pick up where he left off for Liverpool. He tested Kasper Schmeichel at his near post and also hit the bar with a wonderful effort.

He was hungry for a goal and hungry for success with Liverpool seeing as it didn’t come with Egypt this time around.

He was also unlucky not to be awarded a penalty on one break as he was fouled after shooting, but there were encouraging signs for player and club.

Pep Guardiola’s side don’t look like dropping too many points in their methodical unbeaten run, so all Liverpool can do is keep their side of the bargain and put as much pressure on them as possible between now and the end of the season.

The Reds face City in April, and who knows what the state of the table will be by then.

But aside from the league Liverpool still have the chance to claim other silverware this season. An EFL Cup win against Chelsea could be the start of a season of success, and an FA Cup win is overdue.

Then there’s the Champions League, and expectations and ambition on the continent are now as high as they were in the club’s 80s heydey.

So while the league remains a focus, it won’t be the only thing that defines Liverpool’s season.