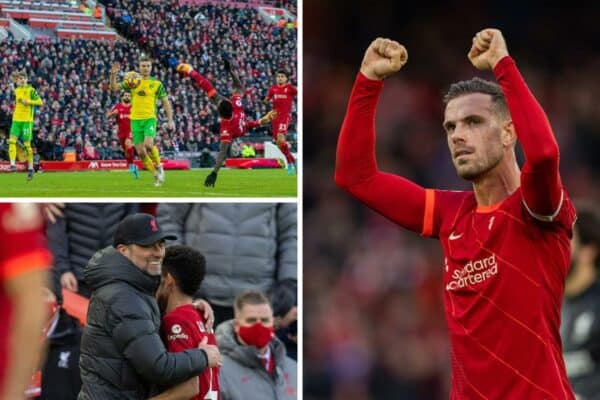 The good, the bad and the key changes – Last word on Liverpool 3-1 Norwich

An influential change in formation proved key in Liverpool’s 3-1 win over Norwich, as the Reds secured a crucial Premier League victory.

For a while on Saturday, it looked as though Liverpool’s title hopes were officially dying.

With Jurgen Klopp‘s side 1-0 down in the second half, however, Sadio Mane equalised with a brilliant finish and Mohamed Salah scored his 150th Reds goal in style.

Luis Diaz then bagged his maiden goal for the club, sealing a win that didn’t always look likely at Anfield and keeping their faint hopes of glory alive.

Here, This Is Anfield’s Henry Jackson (@HenryJackson87) is joined by Chris Williams (@Chris78Williams) and Dan Clubbe (@dan_clubbe) to revel in another Liverpool victory and lauding the tactical switch.

CHRIS: There was lots of ‘good’, from squad depth to rotation.

I’ll be honest, I wasn’t too sure that resting both Trent Alexander-Arnold and Andy Robertson was the best idea, especially when high full-backs are the trademark of your attack, but Kostas Tsimikas did exceptionally well.

Joe Gomez is a centre back, that’s probably all we need to say on that.

Luis Diaz was superb – I’m all in for him being a mega success at Liverpool and I love the way he chases down balls and puts on the burners to attack down the left. He is a joy to watch.

DAN: Oh, Liverpool. Truthfully, not a lot up until the hour mark.

Despite it being ‘one of them days’ for the most part for Diaz, I was really impressed with the winger’s endeavour and desire to make things happen even prior to the floodgates opening.

Another performance right out of the top drawer from Thiago, too. The Spaniard sparked us into life with all of the reassuring brilliance the man boasts.

Whilst statistics will tell you just how important he is, the good-old-fashioned eye test is enough to see that the man exudes world-class ability above most of his peers across the Premier League.

Capable of setting the tempo perfectly, the midfielder’s fitness is pivotal to any title aspirations.

All three goals were sublime but Diaz’s delicious finish from an exquisite Jordan Henderson pass was the pick of the bunch for me.

Ultimately, picking up three points having made seven changes – not a luxury afforded to all sides.

HENRY: The lads have covered my thoughts perfectly here!

It was a day where Liverpool showed why they are ‘Mentality Monsters’, with the performance after Norwich‘s goals superb.

As both Chris and Dan say, Diaz was a bright spark and his goal was a memorable moment – Henderson’s pass was a beauty, on a day when he again showed a return to form.

Salah was unplayable and Lionel Messi-esque at times, Mane’s finish was sublime and Thiago completely changed the game. He really is an incredible footballer.

A word of praise for Alisson and Virgil van Dijk, too – one produced an outrageous assist and the other looked like a dad playing in a kids match, he was that dominant.

CHRIS: When Liverpool win 3-1 it’s hard to pick negatives, but if I’m forced to I’ll say Alex Oxlade-Chamberlain doesn’t do it for me.

When offered the chance he fails to take it – he was ropey in defence and knocked off the attack far too easily.

The first half saw Liverpool miss far too many chances – only four shots on target from 16 taken can come back to bite you – and it did with Norwich’s lucky in-off Joel Matip opener.

DAN: A clear lack of rhythm or cutting edge for 60 minutes.

Albeit always likely to be the case given the rotation, there was certainly a moment or two whereby I thought we might regret giving Trent the afternoon off.

Although the performance overall was below par until the final stages, both Gomez and Oxlade-Chamberlain will be particularly disappointed with their showings.

Ox, in particular, almost seemed too determined to leave a stamp on the game and as a result, rushed most of his actions.

He arguably didn’t do enough for the Norwich goal either.

HENRY: I echo what the others say about Ox – I thought he was appalling, quite frankly, both on and off the ball.

He has his good games, but there are times when I really think he lacks maturity and continues to play like a youngster. I think he goes this summer.

Gomez struggled on the ball at times and flagged a little, but this was his first league start of the season so I will give him so leeway.

Joel Matip‘s lazy flick of his boot for Milot Rashica’s goal was poor, too.

And the key changes…

CHRIS: Jurgen Klopp once again changed the game from the bench – what a time to be alive, as this was a constant gripe for a couple of seasons.

Now the squad depth and quality allow it, though.

Thiago came on and immediately offered a quicker and wider range of passing that drove the attack forward and he also closed down the opposition at the highest point.

He allowed the attack to flourish – something missing when Oxlade-Chamberlain was on.

It also gave Norwich too much to think about and they finally lost Mane and Salah, to their own detriment.

When you can look to the bench and it changes possible defeat into three well-earned points, you will be in the mix for trophies.

DAN: We are seeing more signs of in-game flexibility in recent weeks, perhaps as a direct correlation with the current wealth of options at Klopp’s disposal.

Both the alterations in personnel and to an unfamiliar formation proved pivotal in transforming this match and the coaching staff must take huge credit for that.

Being able to change the pattern of a performance in-game isn’t something that we’ve always flourished at under Klopp – mainly due to being the dominant force from the outset a majority of the time.

However, this last week has shown that Liverpool have the class, quality from the bench and adaptability to deal with any situation.

HENRY: As both of the lads say, the switch to a 4-4-2 was an inspired decision – this is where Klopp, Pep Lijnders and others earn their money.

Having the players available now certainly helps hugely, but it was vital that the right players were introduced and they were.

Origi just gave Norwich‘s defenders something extra to think about and Thiago‘s introduction changed the entire feel of the game.

Onwards and upwards, Reds – there’s a title to be won here (thank you, Spurs!).