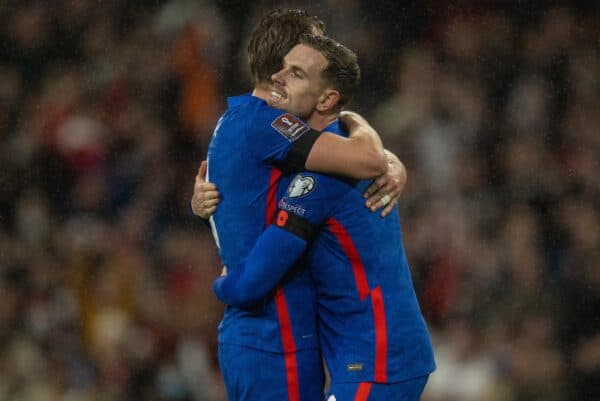 Jordan Henderson played 90 minutes as England fought back for a 2-1 win over Switzerland, which saw a reunion with ex-Liverpool man Xherdan Shaqiri.

The Reds captain was part of a new-look England side at Wembley, as Marc Guehi and Kyle Walker-Peters were handed debuts and Conor Gallagher made his first start.

And Henderson was one of only five players – along with the goalkeeper and three centre-backs – to play the full 90 minutes, in a game that saw the Three Lions come back from 1-0 down.

It took Switzerland just 22 minutes to net the opener, and it came via Shaqiri’s brilliant floated cross, eluding Ben White and allowing Breel Embolo to convert.

England had levelled the scores before half-time, however, with Walker-Peters charging down a Fabian Frei clearance and Gallagher supplying the ball to Luke Shaw for the finish.

Gareth Southgate’s side were hardly at their best, but were given a lifeline as VAR adjudged Steven Zuber to have committed handball, giving Harry Kane the opportunity to step up and convert the penalty for victory.

The first meeting of England and Switzerland since the 2019 UEFA Nations League third-placed playoff was only a friendly, however, with the two sides have already booked their places at the 2022 World Cup.

That Henderson played 90 minutes alongside Guehi, White, Conor Coady and Jordan Pickford suggests he may not be in line for a start in the follow-up friendly against Ivory Coast on Tuesday night.

But it is difficult to predict with Southgate, given his tendency to overplay certain players during meaningless international breaks.

Elsewhere on Saturday, Virgil van Dijk played 90 minutes as the Netherlands overcame Denmark for a 4-2 win and Caoimhin Kelleher started as the Republic of Ireland drew 2-2 with Belgium, with Divock Origi unused.