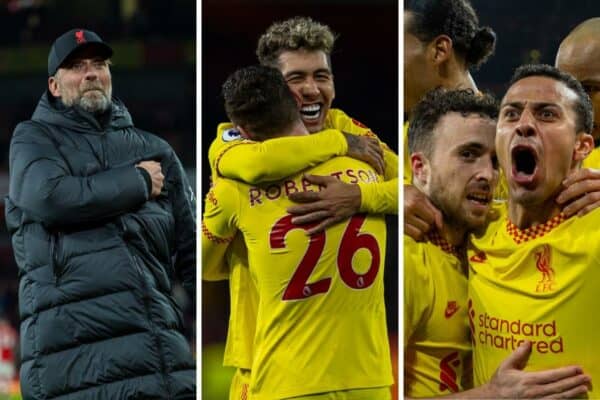 With the Gunners on a five-game winning run and with home advantage, there was a feeling of a potential banana skin for the Reds as they looked to take advantage of City’s slip up.

And while there was nothing pretty about the first-half at a rain-sodden Emirates, Liverpool needed only two moments of pure quality to have the job boxed off.

It was not for the feint hearted as at one end Thiago forced the expert intervention of Alisson before then feeding in Jota who finished exquisitely at the near post.

It set off celebrations of pure relief from Jurgen Klopp‘s players and in the stands.

And while Jota did not get to revel in his moment for too long, his replacement in Firmino would have the travelling Kop bouncing in jubilation again just eight minutes later.

Having started the move off with sublime pressing into the box, he’d soon find himself on the end of Andy Robertson‘s delivery for a deft and genius finish into the net.

Some way to mark you return to action after a month without a game!

This team are just built different.

They saw out the remaining 30 minutes with complete professionalism and on their terms, their ninth league win in a row safely tied up with a bow.

It was another statement and a vital one at that, with the gap to Man City now just a single point with nine games remaining. Game on.

And, truly, the celebrations said it all.

There is something brewing here and we’ll soon know just how special it will be, but for now, just revel it in all.

These really are the days.