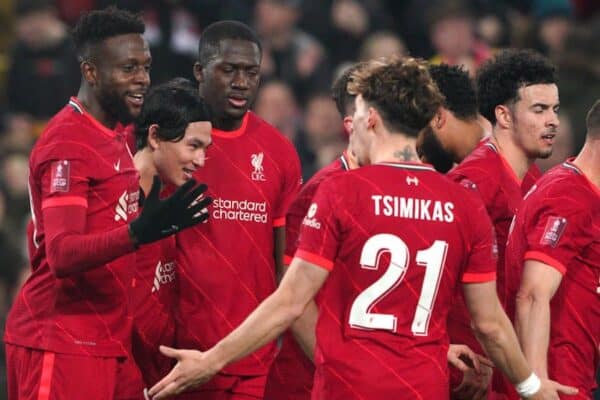 Liverpool manager Jurgen Klopp believes his fringe players have made the right choice in staying at the club to bolster the squad in their quest for trophies rather than seeking more playing time elsewhere.

Takumi Minamino, who scored both goals in the 2-1 win over Norwich which secured Klopp’s first FA Cup quarter-final, is a prime example of what his manager was alluding to.

The Japan international, who a year after arriving from RB Salzburg for a bargain £7.25million in January 2020 moved to Southampton on loan, was attracting interest from Monaco and Leeds in the January transfer window.

There was never any great desire to sell the 27-year-old, nor was the player pushing for a move, and after playing a significant role in helping guide the club to their first League Cup win in a decade at the weekend Minamino was at it again against the Canaries in another cup competition.

“For me, to be a player of Liverpool FC is actually the best place you can be,” said Klopp, who made 10 changes from their Wembley final win over Chelsea which gave the likes of Minamino, Joe Gomez, Divock Origi, Kostas Tsimikas and Alex Oxlade-Chamberlain rare starts.

“That’s the decision the players have to make. But the door is always open (at Anfield) because you will get your chances and then you have to deliver and then you are part of it.”

The depth of Liverpool’s squad, arguably the strongest in a generation, meant that even though players like Mohamed Salah, Virgil Van Dijk, Fabinho, Trent Alexander-Arnold and Andy Robertson were given the night off, their replacements in a second-string team still had too much quality for fellow Premier League opposition.

Midfielder Curtis Jones, who did not even make the bench for the Carabao Cup final, impressed in the first half against Norwich before being taken off as a precaution against injury while Tsimikas, back-up to Robertson, had a hand in both goals to keep their quest for an unlikely quadruple on track.

“That’s the reason we are in the situation we are in, that we have this kind of mentality and character in the squad,” added Klopp.

“A good example is Curtis Jones, who played an exceptional game; Joe Gomez, we don’t have to discuss his quality and he showed it again.

“The boys have to be ready. They don’t fight each other for a position but they have to fight to be their best version and then they have a good chance to be in the line-up for the weekend – but no guarantee.