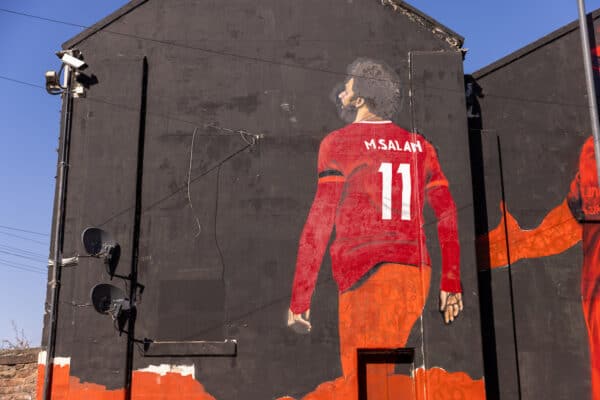 Mohamed Salah will soon be immortalised with a new mural on Anfield Road, with a stunning artwork close to completion next to the home of Liverpool.

Salah is, undoubtedly, one of the greatest players to ever wear a Liverpool shirt.

With 153 goals in 239 games and counting, the Egyptian is already ninth in the club’s all-time goalscorers list, and could leapfrog Michael Owen (158) into eighth before the season is up.

Though speculation is ongoing regarding his future on Merseyside, with contract talks reaching an impasse, Salah is certainly deserving of his own mural outside Anfield.

Mural artist John Culshaw, who recently produced the ‘In Safe Hands’ goalkeepers mural at the AXA Training Centre, is busy working on a new piece dedicated to Salah opposite the King Harry on Anfield Road.

The mural was voted for by supporters through Hotel Anfield, with Salah receiving 40 percent of the vote, and it is based on two of his most iconic celebrations.

When finished, it will take pride of place near murals of Trent Alexander-Arnold and Jordan Henderson, giving supporters another landmark to visit when they head to Anfield.

Culshaw’s work has become synonymous with Liverpool in recent years, with his Steven Gerrard mural on the side of the Sandon another fan favourite.

His other works include tributes to Jurgen Klopp, Ringo Starr, John Lennon and Tyson Fury, who he worked alongside for a mural in the Tyson Fury Foundation gym in Morecambe.