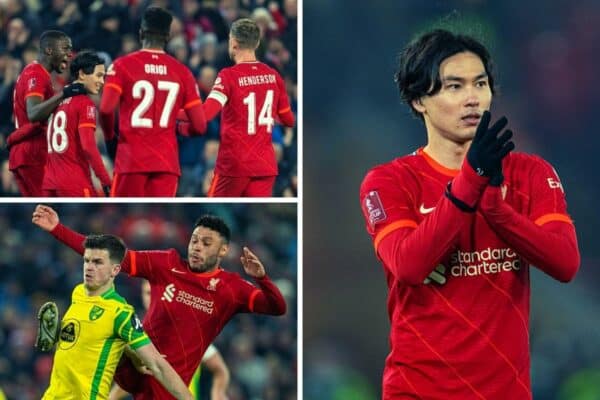 Takumi Minamino and Alex Oxlade-Chamberlain were at different ends of the performance spectrum in Liverpool’s 2-1 win over Norwich at Anfield.

Jurgen Klopp‘s team ran out 2-1 winners against the Canaries on Wednesday night, progressing to the quarter-finals of the FA Cup for the first time under the German.

Minamino scored both of Liverpool’s goals in what was a routine victory, with the Japanese forward again proving to be a force in the domestic cups.

The Reds are in a superb place at the moment, with wins coming thick and fast and immortality still possible in May.

Here, This Is Anfield’s Henry Jackson (@HenryJackson87) is joined by Liam Togher (@liamtogher88) and Dan Clubbe (@dan_clubbe) to discuss Liverpool’s win and their hopes of a quadruple.

DAN: This was a performance of a player determined to not let an opportunity pass him by.

Takumi Minamino was everywhere on that pitch – full of quality, endeavour and he took both goals with the highest level of poise and class.

It’s a testament to his outstanding attitude that despite not featuring in the final on Sunday having played a huge hand in the achievement, the Japanese international was still able to send an immediate reminder of his quality and value to the squad.

Having already seen the fruits of his earlier labour come to bear in the Carabao Cup, we could be looking back on this brace in a similar light come May.

LIAM: Considering that he usually has to rely on piecemeal minutes off the bench, it would be very easy for Minamino to look far from razor-sharp whenever he is handed an opportunity to start.

Instead, his double last night took him to nine goals for the season, one more than Roberto Firmino; while his return in 2021/22 is one goal for every 99 minutes on the pitch, an even better average than one every 102 minutes for Mo Salah.

Even though he knows he will probably be benched again once Premier League or Champions League action rolls around, the Japanese gem has been anything but sulky.

While he faded a bit after half-time, he was a constant pest for Norwich in the opening 45 minutes and not just because of the two goals.

He’s the type of player a manager would love to have and teammates must greatly appreciate.

HENRY: I’m delighted for Taki – ever since that amazing performance against us for Salzburg I’ve been an admirer.

It hasn’t quite worked out for him at Liverpool, but it’s so easy to forget that he arrived in such difficult circumstances.

Imagine trying to settle into a new job in a country, with 30-odd new colleagues, with Covid just about to wreak havoc on the world.

Minamino was superb on Wednesday, particularly in the first half, and as Dan says, his input in the FA Cup could look so key come May.

Nine goals in 22 appearances is not to be sniffed at – he has scored with every shot on target in the domestic cups this season!

Is he ever going to be a key player? I doubt it. But I’d be more than happy to see him stay put in this role for years to come.

DAN: On what was an encouraging night for many of the fridge players, Alex Oxlade-Chamberlain missed the memo.

Previously, the dynamic midfielder has been too eager to leave an impression, but this was a nothing performance that saw him on the periphery of the game throughout.

Earlier this season I had been impressed with Oxlade-Chamberlain when given a run of matches, but it would appear these recent sporadic appearances don’t suit him, and ultimately, they are likely to be his squad role moving forward.

Having come back from the brink on numerous occasions during his sell on Merseyside, I’m reticent to write him off just yet.

But based on this display and the quality of the competition in the squad, it’s hard to envisage a stay beyond this summer.

LIAM: When looking at the height of competition in Liverpool’s midfield right now, those who aren’t fixed starters need to put their best foot forward when given the chance to do so.

Unfortunately for Ox, last night’s game was one that largely passed him by, apart from one decent effort which struck the outside of the post.

We all know how good he can be following that superb first season at Anfield, but this was a night when the more frustrating aspects of his game exhibited themselves, particularly in terms of sloppy distribution.

Given the number of matches we could still have to play this season, the 28-year-old will be needed on a few more occasions between now and the end of May.

Let’s hope he makes the most of his next opportunity to prove a point to Klopp.

HENRY: Ox is such an odd player. In many ways, he forever feels 21 years of age, with an immaturity always existing in his game.

He brings a goal threat and can be dynamic, but he is increasingly flattering to deceive and was really disappointing on Wednesday.

As Dan mentioned, he can look like he is trying too hard to force things and it is one of his greatest downfalls.

We are spoiled as Liverpool fans currently and Ox is a player who would have walked into some teams of the past, but it does feel like his Reds career is reaching a natural conclusion.

If he stays this summer, fine, but him leaving would be no issue in the slightest.

And is the quadruple realistic?

DAN: Of course it’s realistic. This side has proven its quality and winning mentality too often not to dream of such a feat.

Jurgen Klopp has built a squad capable of achieving anything but it’s crucial that they take each game and indeed each competition as its own separate entity. Hunt the remaining three and each game individually.

Should we come past Inter Milan as expected, a kind draw in the Champions League and FA Cup quarter-finals would be welcomed, but with a little luck along the way, make no mistake, Liverpool are in with every chance of a history-making season.

LIAM: It’s great that this is even a question, especially when this time last year we were about to slump to a sixth successive Anfield defeat against a relegation-bound Fulham side.

The fact that not even some of English football’s greatest-ever sides could plunder the league, European Cup and both domestic cups in one season shows how difficult a feat it is to pull off, though.

Right now, the FA Cup certainly seems our best bet for another trophy this season.

The Champions League is attainable but a lot could depend on who we’re drawn against over the spring, and indeed, finishing the job against Inter next week.

Winning the Premier League will be hard to pull off despite how we’ve narrowed the gap on Man City – looking at our 12 remaining fixtures in isolation, there’s none that I look at and say ‘no chance we’re winning that’, but ask me now if we’ll get 36 points from a possible 36 and I’d say it’s highly doubtful.

If we can add the FA Cup and sustain a prolonged challenge in the other two competitions, it would still rank as a very good season.

Quadruple talk is way too premature, though.

HENRY: Like Liam, I’m going to be THAT guy and say that, realistically, I don’t think a quadruple is going to happen.

That doesn’t mean we can’t all dream of it and that it’s impossible, but there’s a reason why no English team has ever achieved it.

I think the Premier League is the biggest issue – Man City are still 1/5 with the bookies, which speaks volumes – but there is no doubt that Liverpool are flying at the moment.

City will be scared of us and I don’t fear anybody in any of the cup competitions – in fact, everyone else will fear us!

I just think that by the law of averages a bad game will come along at some point that will prove fatal to our quadruple hopes, whether that be a bad league result, a shock FA Cup exit or a Champions League loss to another top team.

Frankly, if Liverpool win all four trophies, it will be the greatest achievement in the history of English football.

We might just all have to call it quits at that point and go out on the ultimate high!