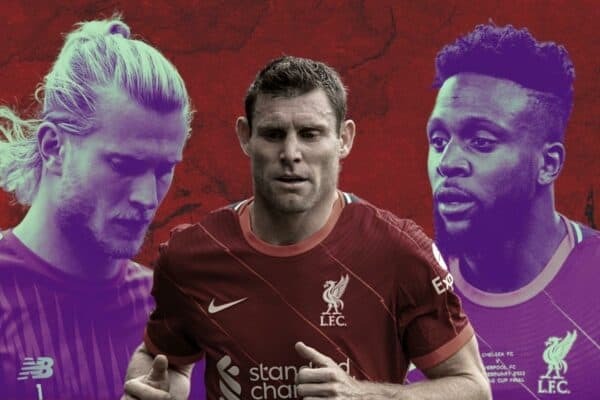 Which Liverpool players will see their contracts expire in the summer?

Liverpool were busy last summer tying a host of players to new contracts, but who see their current terms come to an end in only a few months’ time?

The Reds moved to ensure the likes of Virgil van Dijk, Alisson, Trent Alexander-Arnold, Fabonho, Andy Robertson and Jordan Henderson extended their stay ahead of the 2021/22 season.

Currently, Mohamed Salah remains the much-discussed figure who has yet to put pen to paper with his deal now into its final 16 months, with talks not progressing since December.

It leaves plenty up in the air for Michael Edwards’ successor, Julian Ward, with a handful of players also to enter the final year of their deal by the time next season comes around.

But here’s the Reds that will see their contract expire this summer.

Liverpool have three players who will be out of contract at the end of June: James Milner, Loris Karius and Divock Origi.

The trio have been at the club for much, if not all, of Klopp’s time at the helm and the writing is all but on the wall for two, whereas the veteran of the group could have more in him for Liverpool.

Karius is the only one of the group that was signed by the current manager, with the German viewed as the club’s next No. 1 – but it did not quite work out that way.

He has not played competitively for Liverpool since the Champions League final in 2018 and has 49 total appearances for the club, and he is currently fifth in the pecking order.

It’s a stark comparison to Milner and Origi who remain in and amongst Klopp’s first-team plans, although the latter has fallen out of favour with increased competition for the front three spots.

Will any stay at Liverpool?

Karius will certainly depart once his terms come to an end on July 1, bringing a close to his six-year stay at the club.

Swiss Super League side Basel expressed an interest last summer, while a move back to his native Germany will not be out of the reckoning following his loan spell with Union Berlin in 2020/21.

Origi, on the other hand, who was signed in 2014, will bid farewell after seeing out the season with the club.

There is a one-year extension clause in his contract but he is not set to reach the number of appearances to trigger it, with just 14 to his name so far this season.

AC Milan are expected to agree a long-term contract with the 26-year-old imminently as the Italian side look to inject youth into their forward line for 2022/23.

A bittersweet exit for a player responsible for key moments in Liverpool’s recent success, but opportunities are coming few and far between for the No. 27.

As for Milner, Klopp confirmed in February that Liverpool have held talks over his future regarding a possible extension with there being “no chance” he is to retire.

The vice-captain has proved an invaluable piece of the puzzle for Klopp and while heavily speculated that he would leave after seven years at Anfield on July 1, it may not be the case.

“I’m in talks, the club is in talks, with Milly. We will see,” Klopp said of Milner’s contract situation.

His presence remains influential and he is readily namedropped as one of the loudest figures in the dressing room, and his work on his coaching badges suggests a possible dual role at the club.