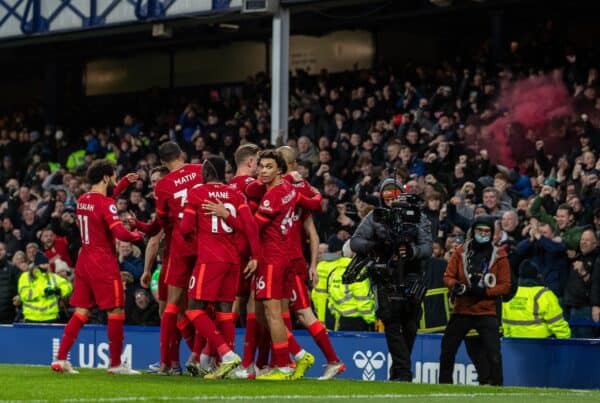 Liverpool meet Everton and it’s a fixture that has not been short of dramatics with the Reds fond of a stoppage-time winner, but the hope is it will not need to come to that today.

Today will be the 206th Merseyside league derby and 240th in all competitions.

It is English football’s most-played derby fixture and all the league clashes have come in the top flight.

The man in form Sadio Mane has scored in four of his last five Liverpool appearances, and he has four in 12 appearances against Everton.

The Reds have conceded in only one of the last seven league games – in the 2-2 draw at Manchester City a fortnight ago.

Jurgen Klopp’s side have led in 45 of their 53 matches played this season.

Only twice have Liverpool scored more goals in a season than the 131 they currently have. Their record is the 138 netted in the 63 games of 1985/86.

Liverpool last lost a Merseyside derby played during the month of April in 1965 – losing 1-2 at Goodison Park with Willie Stevenson scoring a consolation from the penalty spot.

The Reds could also score at least four times in successive league derbies for the first time in their history, and doing so would register 300 at Anfield in all league games under Jurgen Klopp – which the Reds are three away from.

Liverpool have scored five stoppage-time winners against Everton in the Premier League era – Divock Origi being the last in December 2018.

Speaking of, the last Anfield league derby played on a Sunday saw Liverpool win 1-0 in December 2018, thanks to Origi’s 96th-minute header in front of the Kop.

Their six points amassed away from home is the fewest by any team in the Premier League during this campaign.

The sole victory on the road came in August when Demarai Gray and Dominic Calvert-Lewin (penalty) netted in a 2-0 win at Brighton.

Frank Lampard has lost all 3 league clashes with Liverpool as a manager in the top-flight, his Chelsea team scoring 4 while conceding 9.

Stuart Attwell will referee his first Merseyside derby. His last three Everton games have seen them lose at Manchester City, Tottenham and Crystal Palace by an aggregate of 12-0.

He was in charge of Liverpool’s Carabao Cup Final win over Chelsea.