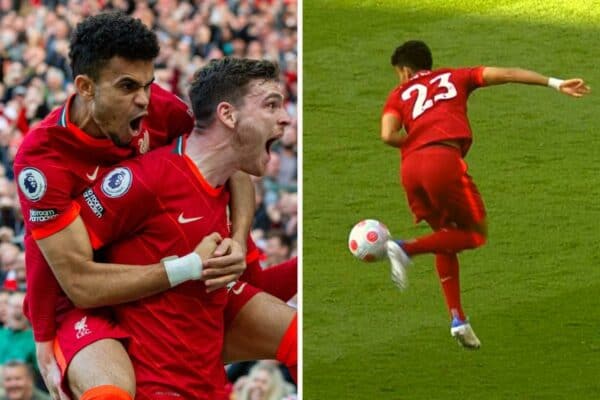 Luis Diaz made a lively, game-changing cameo as Liverpool beat Everton 2-0 on Sunday, with one stunning piece of skill wowing supporters watching on.

In an alternate reality, Diaz would be an Everton player – a deal was in the works last summer, only for James Rodriguez to scupper his move to Goodison Park.

The Colombian dodged a bullet, and five months later he arrived on Merseyside as Liverpool’s new No. 23, taking no time at all to adjust to life in England.

Sunday saw Diaz make his 18th appearance for the club, introduced alongside Divock Origi after an hour of the Merseyside derby.

Andy Robertson scored the opener two minutes later, before a bicycle kick from Diaz set Origi up to make it 2-0 and seal the three points for Liverpool.

Diaz was a livewire on the left flank, and one piece of skill in particular caught the eye:

It was more evidence of the 25-year-old’s dazzling ability, and taking to social media in reaction, Liverpool fans were wowed by Diaz’s impact.

A rabona, in the air, to touch down a long ball?!

Diaz does a Neymar flick and then gets a bicycle assist, what a fucking player

Diaz does everything holding down L2

Easy to exaggerate in the immediacy of something happening, but I genuinely think Luis Diaz has the best first touch I've ever seen from a Liverpool player. Velcro boots.

Luis Diaz came onto the pitch at 0-0, turned the game around with some incredible football and finished it off with a bicycle kick assist for 2-0.

All inside 30 minutes of his his Merseyside derby debut.

We’re so lucky to have him ?? pic.twitter.com/7qDef4vQkf

He’s already proving to be a bargain…

Me still tryna understand how we got Luis Diaz for 37.5m pic.twitter.com/0K9KBvXmrw

I can’t remember falling in love with a new signing as quickly as Luis Diaz.

With the likes of Diaz and Origi off the bench, we have "ice in their veins" players coming on.

They didn't feel the pressure of the situation. Just got out there and enjoyed their game with their flicks and touches.

We probably have the best bench in the world as well, now.

Luis diaz is who Chelsea fans think hazard was?

It is remarkable how quickly Diaz has settled at Liverpool, almost immediately establishing himself as a key player despite spending the first half of the season with Porto.

With four goals and three assists in 18 games, the winger is averaging a direct goal contribution every 151.6 minutes – and with three goals and two assists in nine, it is one every 124.2 in the Premier League.

That does not tell the whole story, of course, with Diaz’s value in entertainment as much as it is in impact.