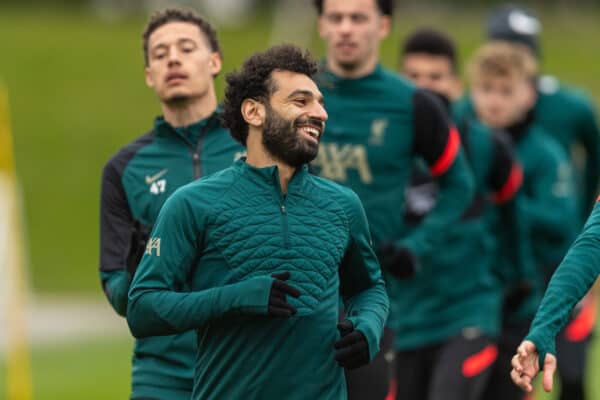 Roberto Firmino has emerged as a concern for Liverpool’s trip to Man City on Sunday, with the striker not visible as the Reds trained at Kirkby on Friday.

Liverpool head to the Etihad this weekend looking to gain a big advantage in the title race, with a win moving them two points ahead of their rivals.

In his pre-match press conference, Jurgen Klopp revealed that he expects a fully fit squad for the tie, saying: “When I last looked on my smartphone, it looked like everyone is available again.”

But the manager may have been given a late update, as Firmino was not part of the 28-man group working in the sunshine at the AXA Training Centre hours later.

The rest of the squad were present, with a smiling Mohamed Salah taking part in warmups and rondos as speculation continues over his long-term future with the club.

Tyler Morton was involved for the first time in a while, too, possibly as a late call-up due to Firmino’s absence, the 19-year-old not in action again with the Liverpool under-23s until Monday in the Lancashire Senior Cup semi-finals.

It is possible, of course, that Firmino was simply working on his own in the gym, but that would suggest he is at least a doubt for the starting lineup on Sunday.

That could narrow Klopp’s options down, with Salah likely to start alongside two of Sadio Mane, Diogo Jota and Luis Diaz.

Takumi Minamino and Divock Origi are also available, but a decision could instead be made over which one of the two is left out of the squad entirely, with eight players who trained on Friday to be omitted.

Four certainties are goalkeepers Adrian, Marcelo Pitaluga and Loris Karius and fifth-choice centre-back Rhys Williams, while the likes of Joe Gomez, Harvey Elliott, Curtis Jones and Alex Oxlade-Chamberlain are regularly rotated in and out.

This, at least, highlights a positive headache for Klopp, as he plots a side capable of sealing victory over City and propelling Liverpool towards status as favourites in the title hunt.