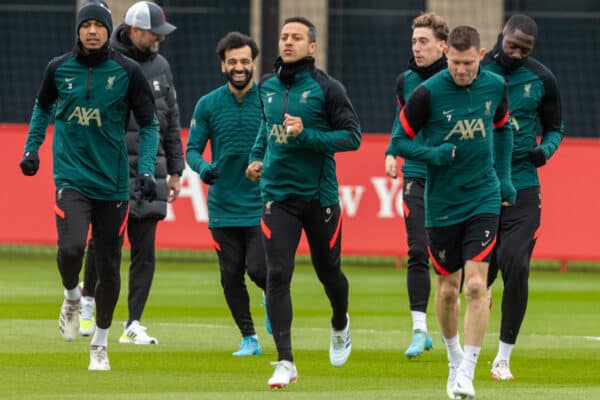 Roberto Firmino was the sole absentee as Liverpool took in one of their final training sessions ahead of the Merseyside derby, with a strong squad at Kirkby.

The Reds host city rivals Everton on Sunday looking to avenge the 2-0 defeat at Anfield last season – and propel their end-of-season title bid.

Liverpool and Everton are poles apart at this crucial stage of the campaign, and though Frank Lampard is contending with six injuries ahead of the trip across Stanley Park, Jurgen Klopp is in a much stronger position.

However, while Klopp had expressed hope that Firmino would return to training for the first time in almost a week on Friday, the No. 9 was not part of the group.

Instead, Firmino is likely to have continued following an individual programme in the gym, with light work outside the next step as he recovers from a minor issue suffered in the FA Cup semi-final.

It seems, then, that the Brazilian will miss the derby, but should be back in time for the first leg of the Champions League semi-final against Villarreal on Wednesday night.

There are no other issues for Liverpool at this stage, with both Thiago and Naby Keita avoiding the Klopp curse after praise in his pre-match press conference.

“I don’t like to talk too much about one player,” he told reporters.

“Always when we do that, something happens to the player! So I’d leave this room and hear ‘Thiago feels a little bit here or there’.”

Fortunately, both Thiago and Keita were involved in a lively session in the Merseyside sun, with youngsters Rhys Williams, Marcelo Pitaluga and Harvey Davies also called up.

There were no other surprises in the squad, with Klopp able to work with a strong senior core as Liverpool push for three more trophies.