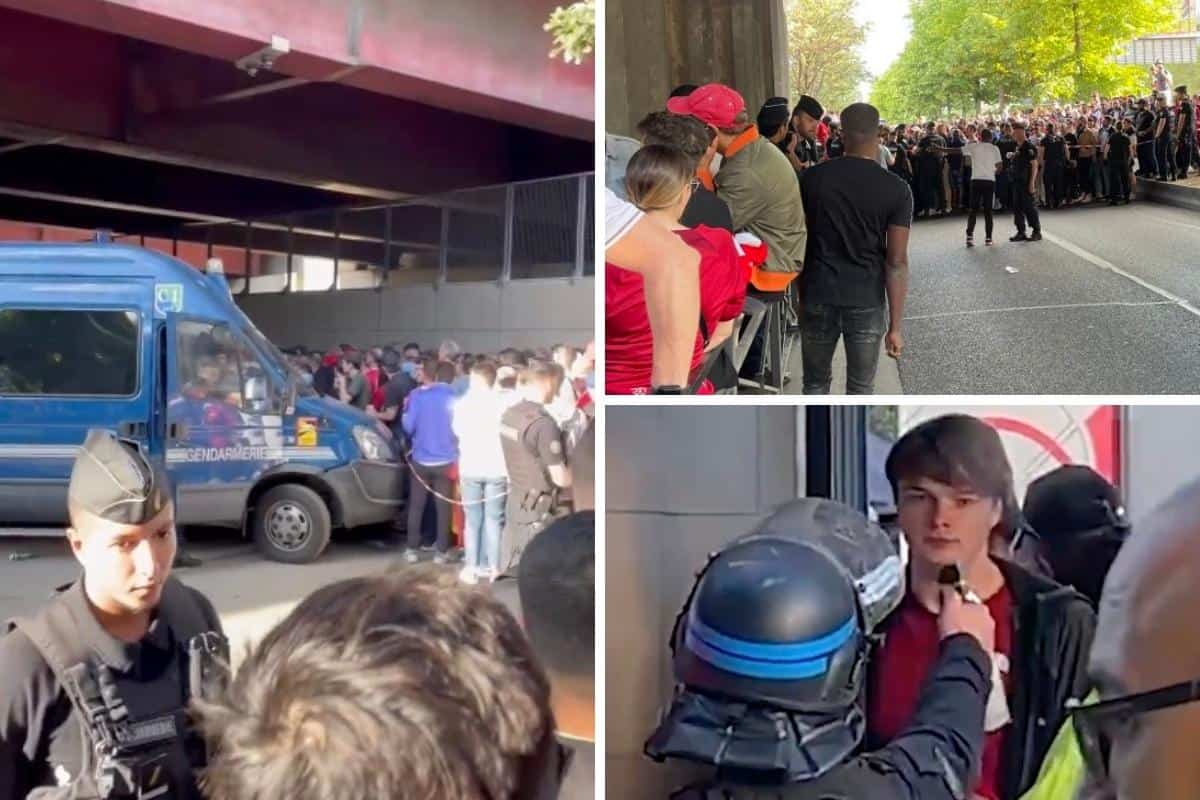 The Champions League final on Saturday night was clouded by the chaos in awful treatment of ticket-holding Liverpool supporters attempting to gain entry.

While UEFA peddled lies about the situation outside of the Stade de France to those in the stadium and watching around the world, the truth became evident through updates on social media.

The morning after the Champions League final, the Mail‘s chief football writer Rob Draper has detailed his experience, showing what really happened to fans.

“It’s important to tell what happened on the ground last night as I see that there are already several versions of ‘The Truth’ flying around. I was on the ground from 6.45pm (2.15 hrs before kickoff) when problems began. So here’s a thread explaining my experiences…

“Want to get this out as French interior minister Gerald Darmanin is claiming ‘thousands of ticketless British fans’ caused the issues. Sure this plays well in France. I note he was tweeting from safety of observation box in stadium + wasn’t on the ground.

“Had he been so he would have observed ineptitude of the operation. I came from Stade de France metro, normally around 10min walk. Took a bit longer but that’s usual. Mood was fiesta like. At around 19.00 I arrived about 30m from Liverpool end…

And here’s the crucial bit of evidence, the pressure point which caused the majority of problems. Police had for some reasons parked 3/4 vans across the paths, making a broad walkway suddenly narrow causing a bottleneck. I shot this at 19.22 after about 10mins of waiting pic.twitter.com/4KyA7gAg4l

“Already to my eyes it felt dangerous. You weren’t allowed to go round on the road, so people were clambering over fences to join the queue. There were children, blind fans. At this point it was moving but when I got there around 19.05 I had that pit of stomach feeling…

“I began speaking to police (in French) asking why the vans were parked there? Could they move them? They shrugged told us to move on. This is about 19.10. I said: ‘It’s dangerous. There are thousands of people behind. In 10mins, it will be more dangerous…’

“One policeman seemed sympathetic, said he couldn’t move vans. i said: ‘Call your boss. It’s dangerous. They have to be moved’ He promised he would…

One caveat: at 19.00 there were no ticket checks, searches here.

Maybe that was plan: weed out forged tickets/ticketless fans here

If so it was a terrible plan, a narrow vortex with little space to turn people back https://t.co/U0ZFVPH83V

“When you got under the bridge shown, I looked back and saw this. Remember, I’m taking these photos at 19.28 because I can sense the chaos coming. They wouldn’t use the road to release pressure. Thousands of fans are arriving behind…

When you got under the bridge shown, I looked back and saw this. Remember, I’m taking these photos at 19.28 because I can sense the chaos coming. They wouldn’t use the road to release pressure. Thousands of fans are arriving behind… pic.twitter.com/pqrEgVHP2I

“I could sense thin police line holding people back wouldn’t hold not because of belligerence – altho by now there was frustration exacerbated by the kettling – but because sheer weight of pressure from behind. Sure enough, mins later I saw riot police moving in that way.

At this point it may be worth referencing the stadium plan. We’re passing under the main road to south to Gate X. It’s 19.30. We’re within metres of LFC end. But now, incredibly, things got worse. (I started texting UEFA officials at this point to warn them of chaos) pic.twitter.com/Link7GZZww

“There was walkway, around 7-8m wide, up to concourse to LFC end. But incredibly this was shut. Instead we were herded on to pavement, around 1-2m wide, alongside main road. As you can imagine, this took forever. This was when riot police barged thru…

“We were now being directed AWAY from the LFC end. Worse, gates U, T, S and R were all shut. Who took this operational decision? Was the concourse dangerously overcrowded? (Didn’t look that way) Kettling 1000s of fans into 1 corner 90mins before KOFF, closing gates, seemed mad.

“By now I was beginning to worry for myself. (Previously I was more worried for those behind) Again, incredibly, there were Portacabins obstructing the path. We had to shuffle round, at right angles, pretty much single file. I recall thinking why hadn’t these been removed?

“On top of Portacabins there were police. One officer was mocking fans. There was a female officer and (stereotype alert) I thought she might be more responsive. Tried to get her attention saying ‘It’s dangerous!’ The blind fans with guides were still working their way thru…

“We ended up in corner at gate N, which was Real Madrid end. It was now about 19.55. Ahead was a wall of what looked like Real Madrid fans. There was nowhere to go but gate N which is maybe 4-5m wide. There were 1000s of fans heading that way, to the 1 narrow gate which was open.

“There had been no ticket checks up to this point. It was impossible to get thru. Q wasn’t moving and clearly wasn’t going to move. By now there were whistles, tension + flustered UEFA officials, bemused police, overwhelmed stewards. gate N had 5 or 6 people checking tickets…

“Not that it matters more, but I could see corporate ticket holders unable to get in and enjoy hospitality for which they’d paid top $. At this point I shamelessly played my get out jail card, spoke to police, showed my media credentials and was ushered thru a side entrance…

“So, thanks to them. But it shouldn’t be like that. This is about 20.00, an hour before KOFF. It seemed clear to me the fans I’d left behind were unlikely to get in. Important to note that at this stage noone had tried to climb barriers, rush gates, etc.

“On stadium concourse it seemed quiet. I could see no reasons why fans were being locked out. UEFA claim that forged tickets at turnstiles had caused backlog. Obvs I didn’t see that. But my experience was the backlog was caused by organisational ineptitude…

“Clearly situation degenerated once I’d left. Increasingly frustrated and kettled fans, anxious for KOFF, ratcheted up the chaos. There were some examples of some fans trying to climb fences but watch this from @marcosbenito9 (in Spanish but pics tell a story):

“He specifically says that fans scaling fences and running in were local youths. Obviously it’s hard to tell but none of those in shots have LFC colours. Indeed a LFC fans tries to stop one, doing better job than stewards.

“I wld guess that chaos last night was caused by the terrible logistics. Once chaos ensued, then bad actors sought to exploit it. Police responded with tear gas, pepper spray. The police statement saying they saying they quickly restored order is laughable were it not so serious.

“One feature of Lord Justice Taylor report into Hillsborough was the complete lack of sensible response from police on ground because they didn’t have authority to change plans. Senior commanders were elsewhere. This is exactly what happened last night.”