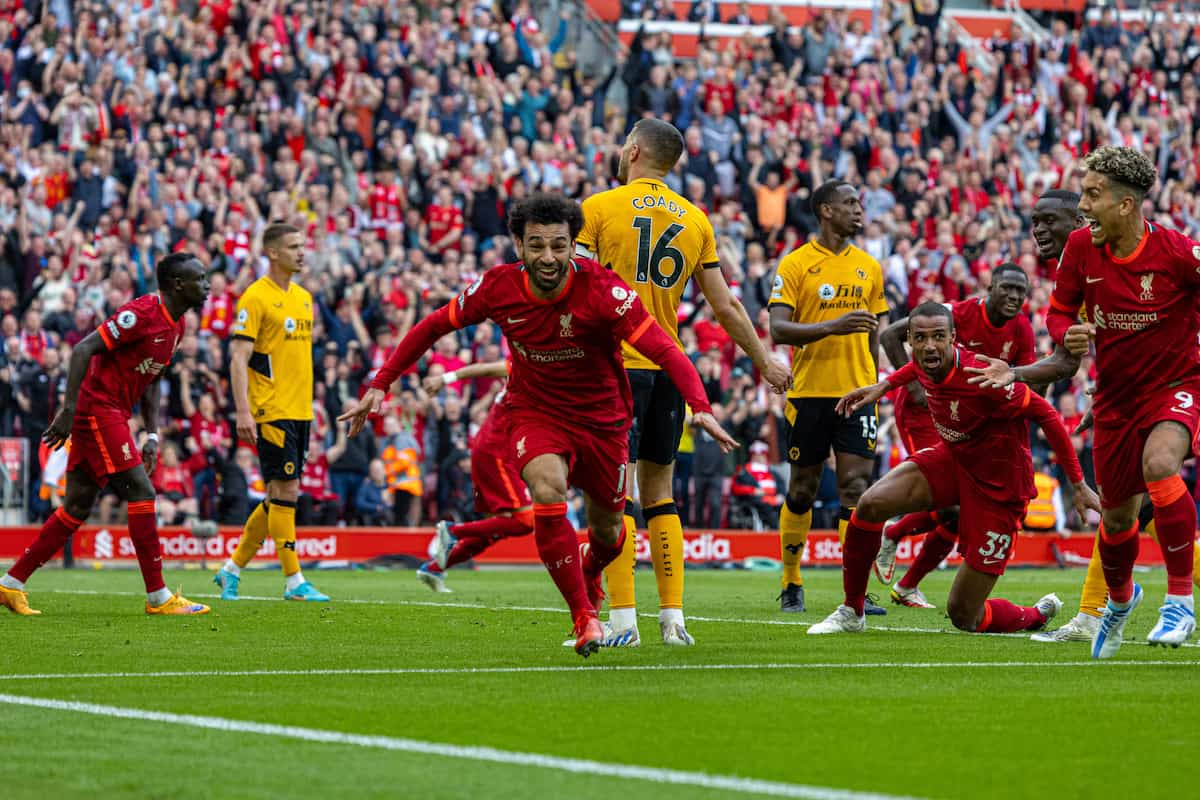 The watching media could only applaud Liverpool’s efforts in the Premier League title race, despite Man City prevailing on the day.

The Reds won 3-1 at home to Wolves on Sunday afternoon, and for a period in the second half, it looked as though glory could be coming their way.

City overturned a 2-0 deficit at home to Aston Villa, however, sealing a fourth league title in the space of five seasons.

Here’s a look at how the media reacted to Liverpool’s win, assessing their brave title challenge in the process.

It was impossible not to feel sorry for the Reds…

Richard Jolly, for the Independent, touched upon another 90+ points haul not leading to glory:

“When Mohamed Salah was summoned from the bench, the task was twofold. Win the game and the league for Liverpool. He managed one but not the other, a Manchester City comeback taking Liverpool’s destiny out of their own hands.

“The bid for the historic quadruple finally ended, perhaps in suitable style, with Liverpool winning. They have triumphed in 16 of their last 18 league games, but it was not enough.

“It amounted to a second case of doomed heroics in four league seasons, chasing City to the last again, finishing with more than 90 points, but coming second.”

The Guardian‘s Andy Hunter was flat, if defiant, after the final whistle:

“Anfield dared to believe in number 20 and the unprecedented quadruple, until a small eruption occurred in the corner of the stadium in the 81st minute.

“Jurgen Klopp’s team got the victory that would have seen them crowned Premier League champions but for Ilkay Gundogan’s late winner at the Etihad Stadium.

“They finished instead with supporters’ chants about running around Paris with the cup, and they will take a repeat of 2019 should the season end with another Champions League triumph against Real Madrid next Saturday, but there was also unmistakable deflation at the end of a day that promised so much only to deliver a tale of what might have been.”

Sam Wallace of the Telegraph admitted it was thrilling for the neutral:

“This was one of the great afternoons of football, and of sport too, all played out against a backdrop of disbelief: that Villa had scored, that Villa had scored again, that Wolverhampton Wanderers clung onto the ankles of Liverpool, however hard they tried to shake them off.

“For those with skin in the game it was, of course, an agony, but for the rest of us to witness the pressure and the expectation and the great longing, was an epic kind of drama.

“It was a game that, only until the very end when the inevitability of City’s triumph was clear, was played in its entirety as if it was the last two minutes of a Cup tie.

“There was the early Wolves goal, then the reaction to the first goal for Villa at the Etihad before half-time that began as a hiss of excitement and swelled into a roar within seconds.

“Then there was the second Villa goal with around 20 minutes left and a strong sense then that anything was possible. Just as the mood had risen so it fell with the acknowledgement that for all the afternoons and evenings that had belonged to Liverpool at Anfield this was not going to be one of them.”

There was great praise for their efforts, though…

“It was always going to be tough [for Liverpool] with the position that City found themselves in, but credit to Liverpool. It would just be a cakewalk for City every year if it wasn’t for Liverpool.

“I said before there’d be a party atmosphere here no matter what, but the way things have unfolded today, which was very unexpected, is why it feels a little bit flat. You have to congratulate them, that’s what champions do.

“We’ve been in this position before but it’s tough. Unfortunately it wasn’t enough. We can’t have too many issues, we did absolutely everything all season right until the last day. If you had said we’d be here in January, we would have bit your hand off. I’m very proud of the boys but it’s over yet, we’ve got another game next week.”

The Liverpool Echo‘s Ian Doyle was full of pride, too:

“Only three times in Liverpool’s history have they tallied more than the 92 points they accrued this year, two of which have come during the Klopp era.

“The Reds, in truth, couldn’t have done much more, losing just twice in 38 games and ultimately beaten by a team that will be regarded as one of the greatest of all time.

“So, too, will this Liverpool vintage, who haven’t quite finished yet with this campaign, the Champions League final against Real Madrid in Paris to come. The quadruple might be over, but a cup treble very much remains a possibility.”

Ian Ladyman of the Daily Mail had lots of respect for Liverpool:

“So there will be no quadruple for Jurgen Klopp and his team. There will no hallowed treble of league, FA Cup and Champions League, no matter what happens in Paris next Saturday.

“But what a season this has been for Liverpool once again. 92 points and no title.

“That is the incredible standard set by Pep Guardiola and his players and there is no shame in finishing second to a team like that.”

Up next: the Champions League final… 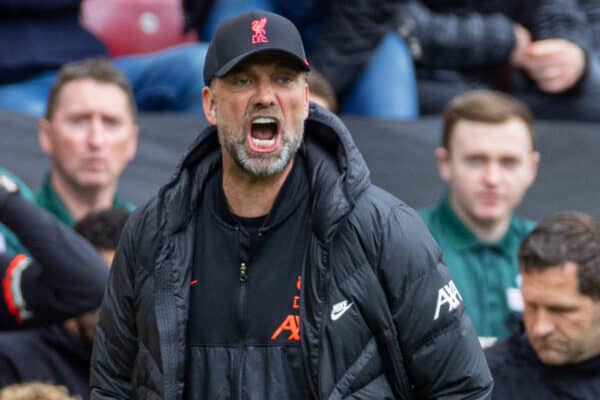 This Is Anfield‘s Nalton looked ahead to a special night in Paris, assessing the mindset of the players:

“The knock-on effect from the effort put in during this last league game could go one of two ways.

“It could have taken so much out of the players that they will be tired, mentally and physically, for the game against Real Madrid after an already gruelling season.

“Or, it could prove to the team that they can perform in such high-stakes situations. They have already won two cups this season after all.

“Given the way Klopp can motivate his players, you would hope it’s the latter.”

This @premierleague season could be the best we’ve ever seen, Title race, top 4 & relegation all going to the wire. Brilliant atmosphere’s up & down the country with the fans back. Congratulations to Man City, disappointment for LFC but a 7th European cup will make up for it! ??